Last year my guild participated in the Ultimate Guild Challenge for the show in Grand Rapids.  Our 8 quilts were selected to be shown, though we didn't win in our category.

This year, we decided to go for it again.  I wasn't going to participate - I had too much else going on.  Then a member gave a talk on the elements of design.  She talked about line and color and all sorts of things that she called Art 101, but since my art class experiences were minimal (remember I'm a science geek), I hadn't actually learned any of this.

I left feeling I HAD to make this quilt for the challenge.

I spent about 3 hours that night, after our meeting, on the computer trying to figure out how to make my idea fit our challenge topic of "Window".  I figured it out, though it's a little obscure to non-science geeks.  Heck, to even some science geeks it's a little obscure.  But having worked 10 years in a microbial epidemiology research lab, it wasn't exactly foreign to me.

So off I went.  I had exactly 2 weeks from inspiration to due date.  It had to be finished, labelled and have an AQS-approved hanging sleeve.  Nothing like a deadline to get you moving, right?

So here are pictures of the process: 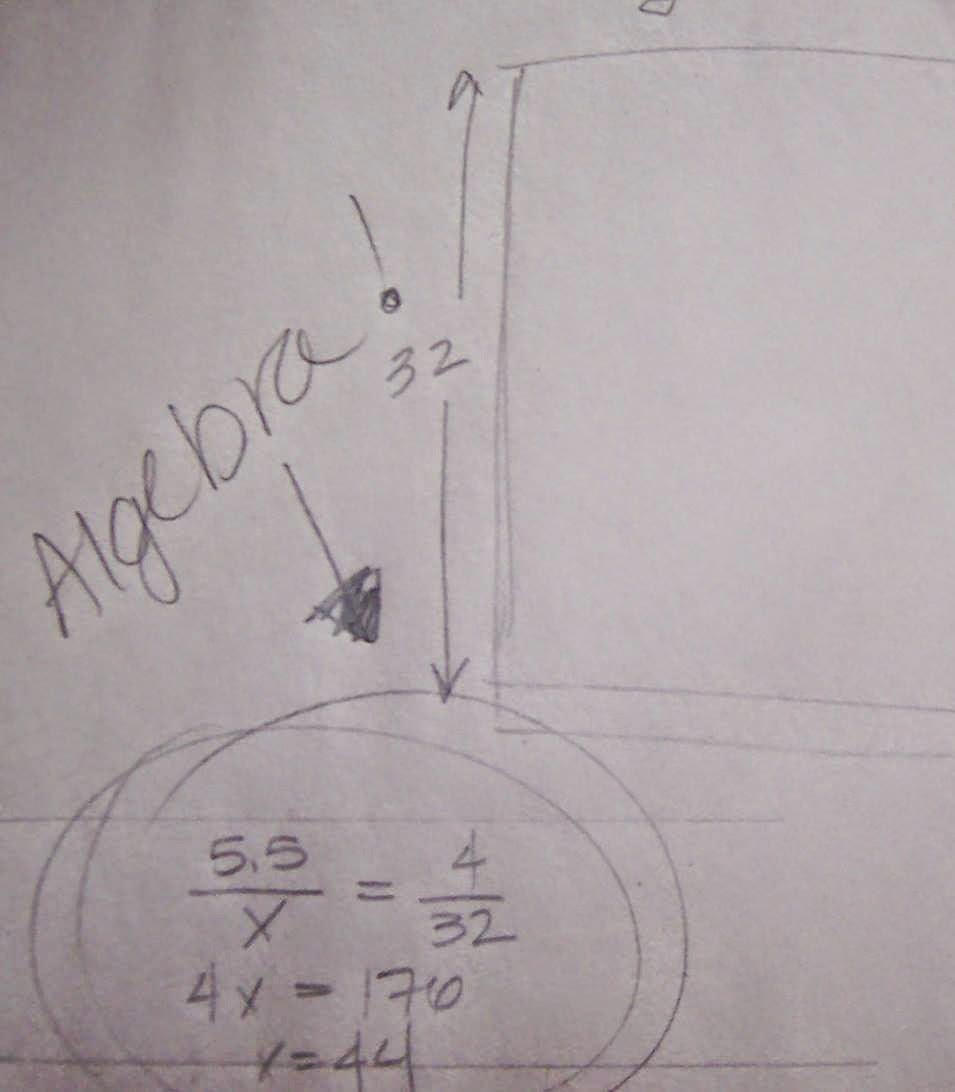 Not only am I a science geek, here is PROOF that I use algebra in real life! 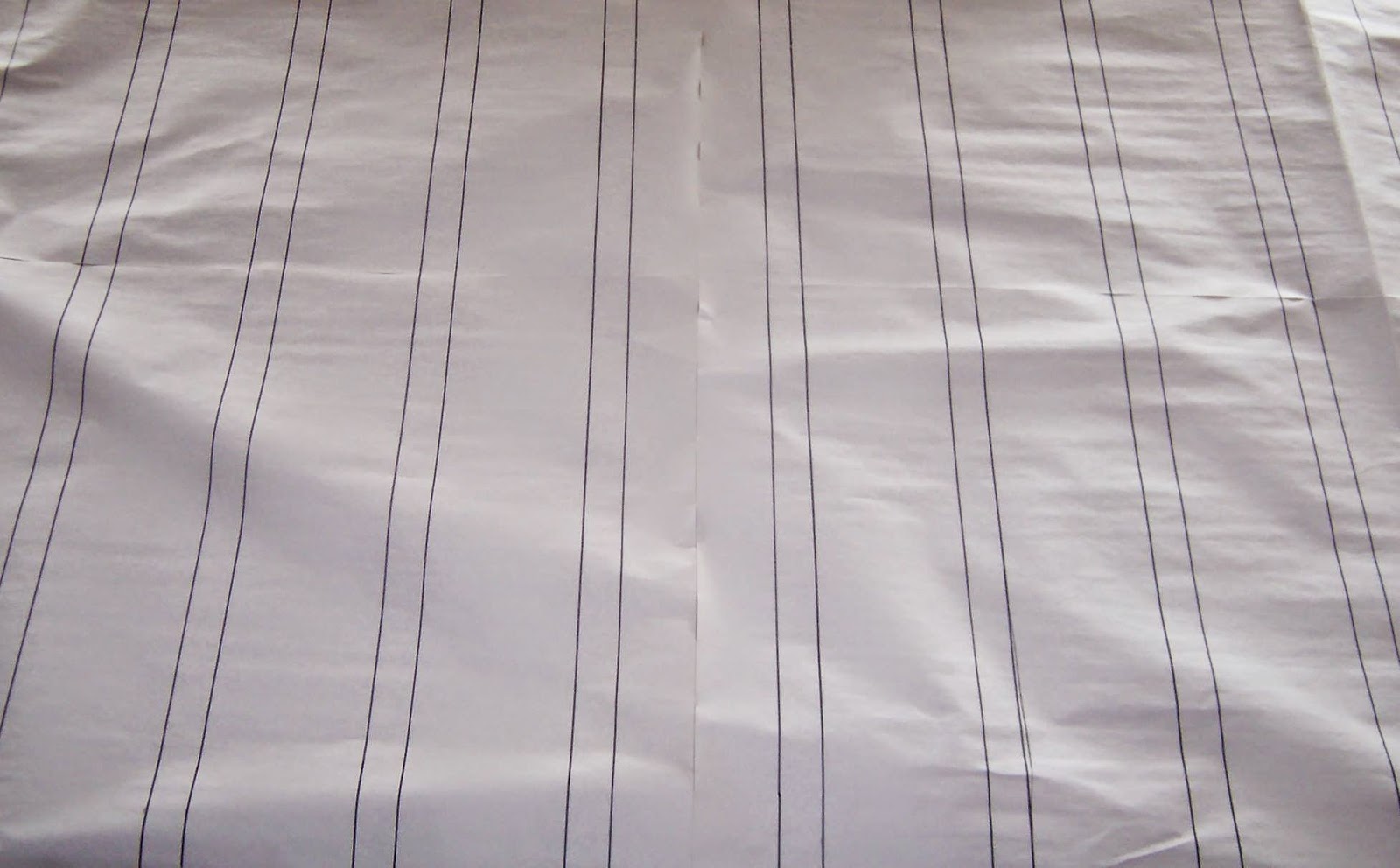 Then I had to make sure everything was straight... 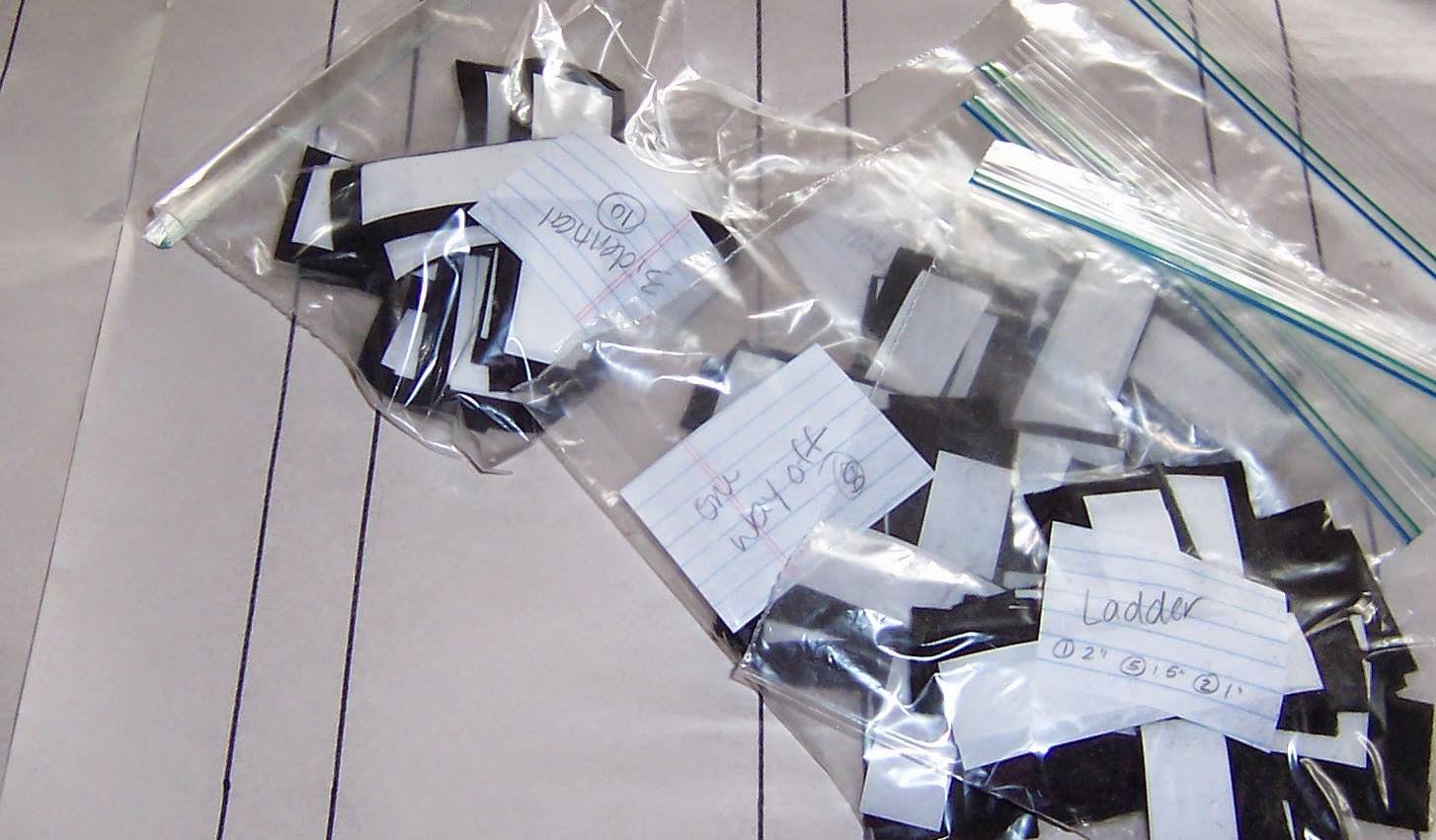 And had to keep all the pieces separate so they ended up where they should go... 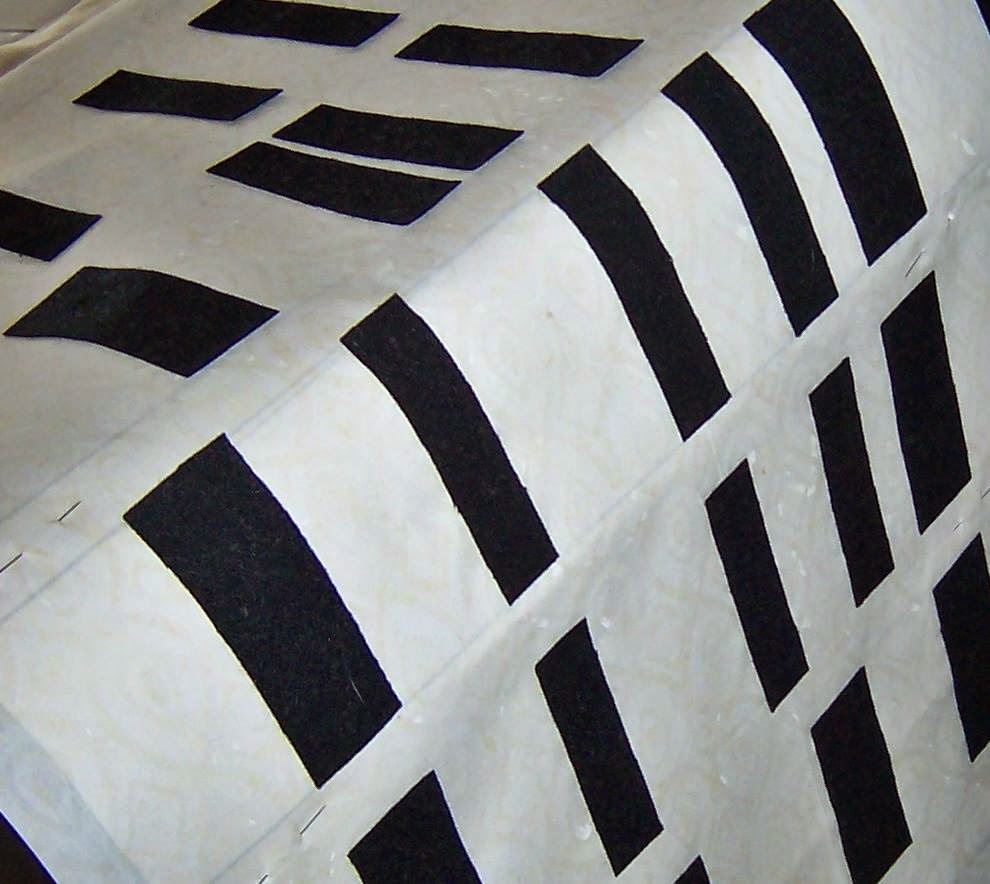 And stick them all on (Heat N Bond does not work well for this, FYI)... 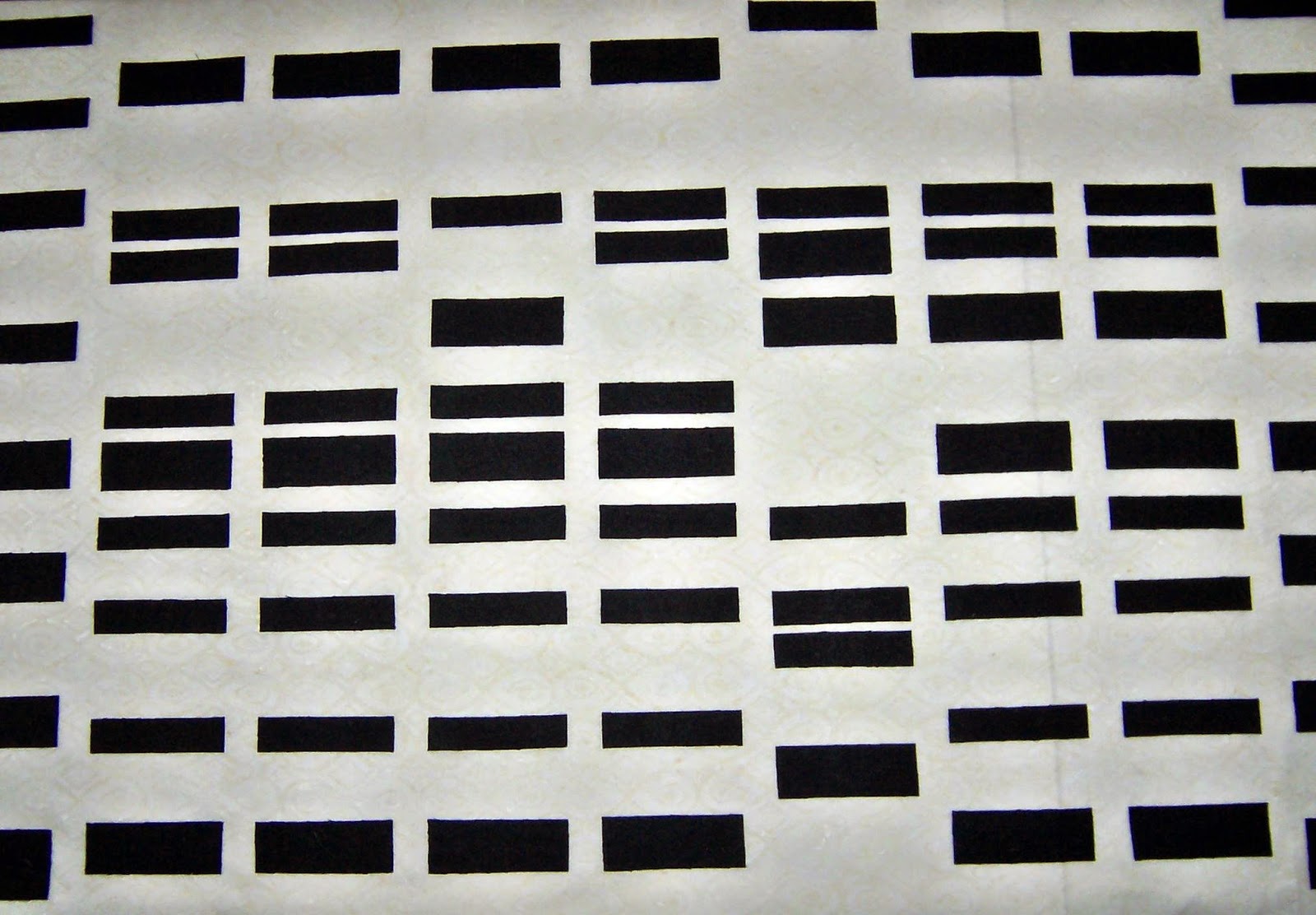 Pin them down and sew around the edges.
Background is an off-white batik, black is wool.

Quilt it (sorry this isn't a great photo) 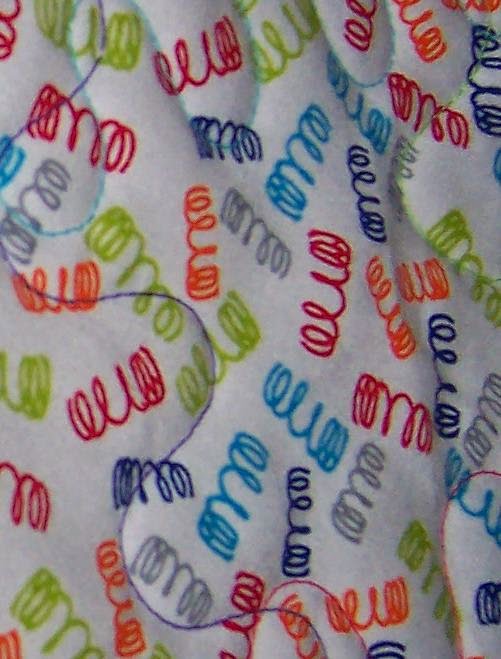 Make sure the back is fun... 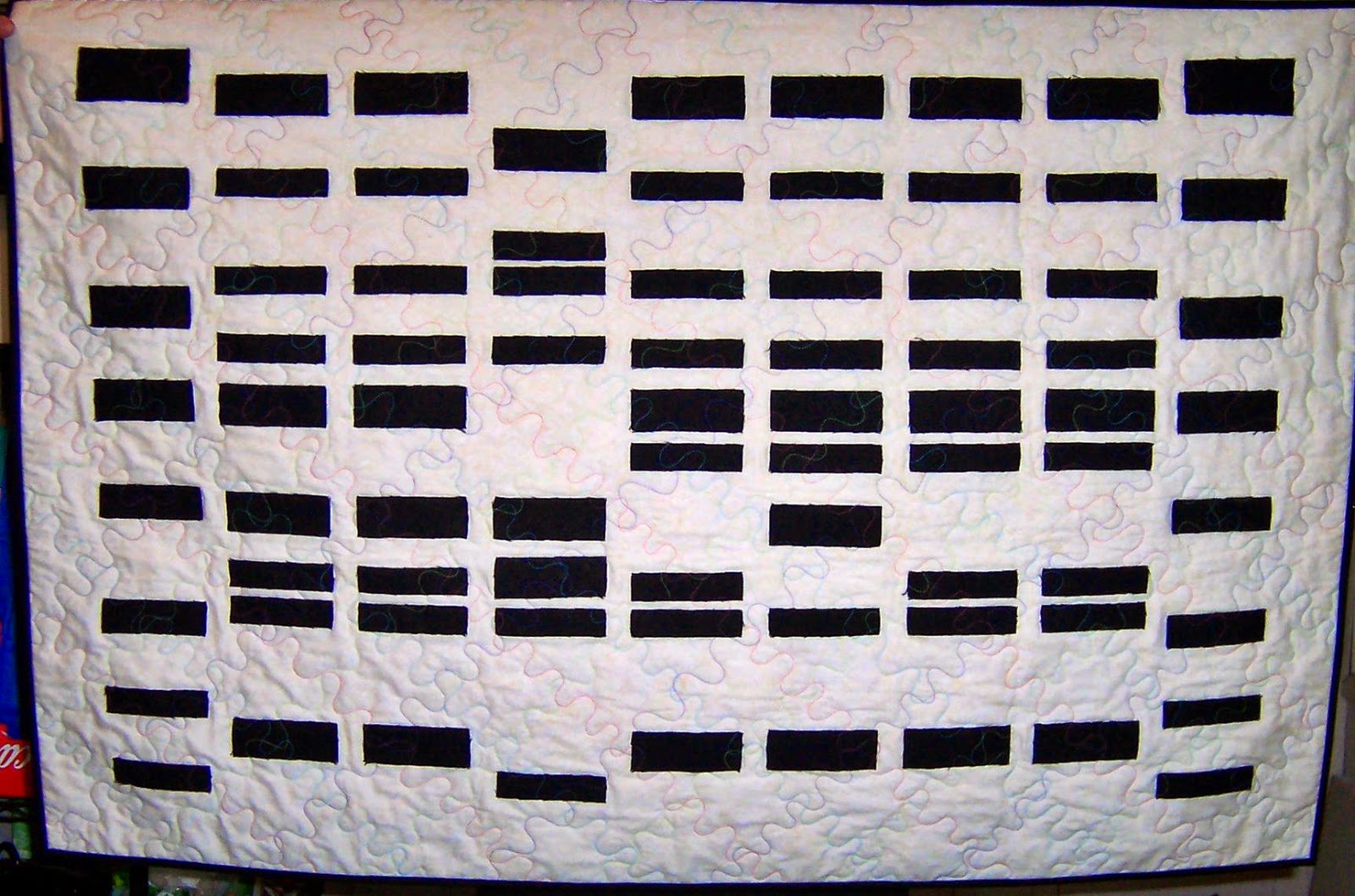 And FINISHED!
On time!

But...today we heard our entries were not accepted.
I'm sad, but at least we tried, which is more than a lot of guilds out there.

So now I'd better explain what I've made because I'm sure most of you are scratching your heads wondering what the HECK I've done here.

So the title of the quilt is:
"Within the Epidemiological Window: PFGE"

An epidemiological window is the period of time that an epidemiologist studies.  An epidemiologist is best described as a "disease detective".  When there are foodborne outbreaks, these guys are the ones who do the work to figure out where it came from and if the sick people all got sick from something related or not.  Usually this window is a small one (a week or two), but sometimes, it can be larger and look at patterns of disease over a longer time.

PFGE stands for Pulsed Field Gel Electrophoresis.  It's a technique that is used to visualize DNA (genetic material) of organisms of interest (usually bacteria) and compare it.  The more similar the DNA, the more likely the bacteria are related.

DNA is broken up into smaller pieces and these pieces are copied a LOT of times.  This "soup" is separated using electricity.  DNA carries a negative charge and when it is put in a field of electric current will migrate towards the positive charge.  If you put this into something that will slow the movement (it looks a lot like clear Jell-O, called a "gel"), the smaller pieces will move faster and the larger pieces will move more slowly, and they'll separate.  Then you stain these pieces and take a photo.

What you end up with looks like my quilt.  Each vertical column represents an individual organism.  The two outer columns, or bands, are a "ladder" with known fragment sizes to the size of the DNA pieces can be estimated, if desired.  The more similar a column is to another, the more related the organisms.

The quilting also represents part of the process.  In traditional electrophoresis (the application of an electric field to the DNA) the electricity goes one direction.  But with larger fragments, they tend to clump up, so someone figured out that if you change the angle of the electricity flow every so often ("pulsing" it), the pieces separate better.  So I quilted the electricity going through the "gel" in a variety of colors to represent that it is not happening all at once (and to add a little pop).

I have done this technique.
It was fun.

Creating this quilt...well, it HAD to be done.

Maybe we'll try again next year, but this year, without my last-minute entry, our guild would not have had enough to even try and I think some members are getting fed up with others who say they'll make a quilt and don't follow through.  But with only about 40 members, I think we've had a pretty good showing for two years running.  I know bigger guilds (300+) who can't even get 8.

And we'll have ours in our own show next March.

No other quilting is going on around here.  I'm in a slump again, but trying to get out of it.  Pinterest and blogs and such are inspiring me, but I think it's my to-do list that's too long that's holding me up.

I think it is kinda cool! I was thinking something along the DNA line before I read the complete explanation. Even though your entries were not accepted this year, you do have a really neat quilt! I'm glad you made it and tried for the competition, if nothing else, you learned something new and gave it a try!

I guessed it was DNA! What a shame your guild weren't chosen but at least you have a terrific quilt.

Spent at least 1 year performing electrophoresis testing. Love your explanation. Also love the quilt. Our guild added a modern category this year. Yours would fit.

I wouldn't even know about the challenge if it wasn't for you! My guild has never mentioned it, and I would never try to do one - I'm not very imaginative. No one can say that your quilt isn't unique! Translating the work you do into a quilt is amazing - thanks for sharing the process. Too bad they didn't accept your entries. Maybe next year?

I wouldn't even know about the challenge if it wasn't for you! My guild has never mentioned it, and I would never try to do one - I'm not very imaginative. No one can say that your quilt isn't unique! Translating the work you do into a quilt is amazing - thanks for sharing the process. Too bad they didn't accept your entries. Maybe next year?

I can't even imagine trying to make a quilt from such job experiences! But then, science at any level was never one of my better subjects! From what I understood from from your narrative, you did a very good job of translation to a quilt! Sorry you didn't get accepted for the challenge; I'd bet there would have been none better! ---"Love"

Thanks for the science lesson. I'm impressed with your ability to translate your day job into quilt designs. It's too bad your guild's efforts weren't selected this year but hats off to all of you for participating at all!

I am in awe of how you translated what you do into such beautiful art, this year and last. Too bad your quilts were not accepted.
Maybe you need some summer fun to jump start a new project.
I do think my UFO list is getting to me . ;)