Ready for a finish?
And a reveal of one of the sneak peaks? 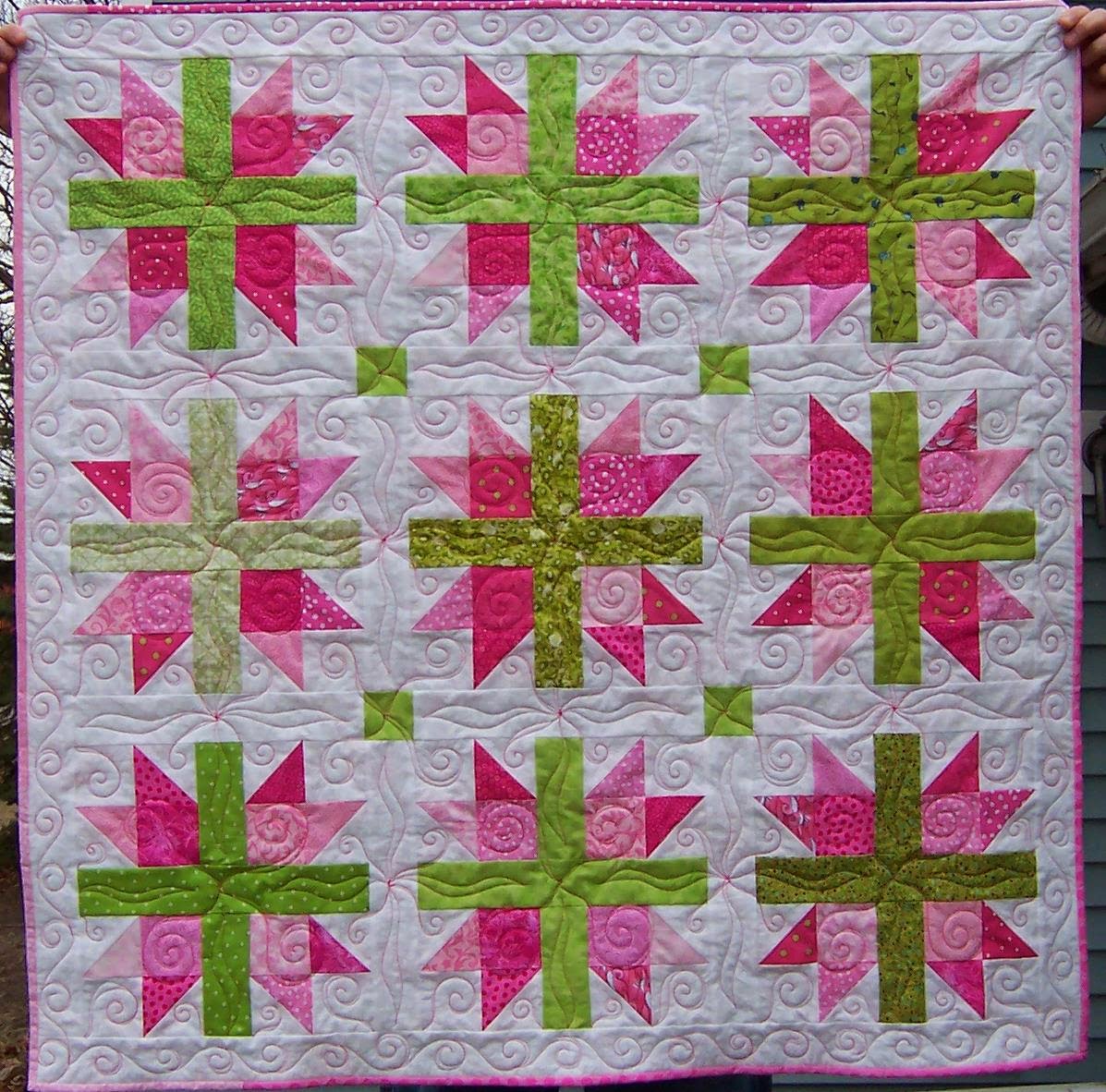 There are quite a few people pregnant at work right now and this went to one of the gals who is due in about a month.  It's her first and she's having a girl, so why not go pink?!

Another coworker and I had talked about doing this together (she helping with the fabric and pattern choosing, as she's not a quilter...yet...), but we'd let the idea drop.  And then one day I saw this quilt and decided it needed to be made.  Like now.  So I just went ahead and did it.

First, I dug through my stash and figured out which pinks played well together (and found out I didn't have all that many and had to make a trip to the store...or three...) and went from there.

My inspiration also had a link for a tutorial (found here) and the block went together so easily.  I still can't believe how many of my points were perfect on the first try!

I took the top to my quilt guild meeting and one of the other gals, who is an AMAZING longarmer, and I sat together with a black and white printout and doodled until we had some pretty good ideas of what to quilt into this.  I tweaked it a little before the final work, but I really like what we came up with.  (We giggled a lot, too, though, because some of the motifs we drew, when combined, ended up looking like an alien/devil.  And then she shared how to make a moose out of loopy flowers...not on purpose...)  It took a while to quilt and I need to work on getting the center start/end points tighter, but for now it's good.

Here's a peek of the back: 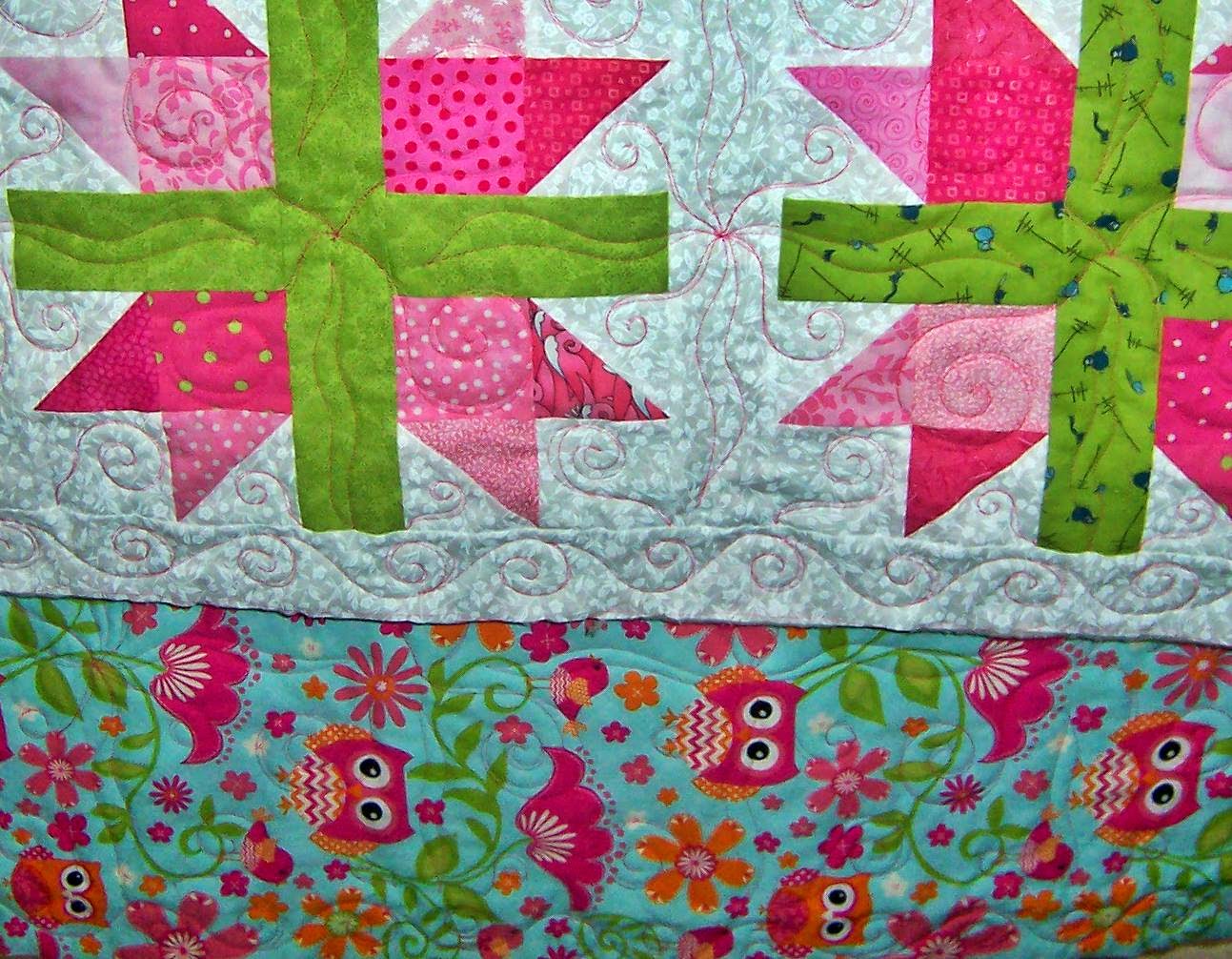 The binding is scrappy pink.  Some of the binding fabric isn't in the quilt itself, but I had a strip wide enough for binding, so in it went.  Yay for using stuff up!

The gal who got it, Kasie, has mentioned in a group introduction that she's a quilter, so I hope she likes it and isn't looking at the few points that aren't so pointy and criticizing!  But I'm sure I surprised her, so there's that.

I hope to find time this coming weekend to quilt the next top, newly finished over the past weekend, but we'll see.  This Saturday is my guild's sewing Saturday, so I might end up making more progress on baby quilt #3 instead.  But #2 has a few months before the official appearance, so I should be good.

In other news, Friday I got home to find our gas turned off.  The power company had been here repairing the line that comes to the house from the road, as it had been leaking, but to do so, they had to turn off our gas.  While it was warm enough outside to even have windows open at that time, our water heater is also gas-powered.  And overnight the temperature dropped enough that I was NOT going to take a cold shower Saturday morning.  So we waited, somewhat patiently, until the power company came back to unlock the gas flow and relight our furnace and water heater.  (We probably could have figured out the relighting part, but without gas coming in, we'd have wasted a lot of matches!)  While I understand the need for safety when doing these repairs, I sure wish they'd gotten here sooner to warm up my water!  Since my day usually starts with a shower, I didn't have much oomph to get going Saturday morning and it ended up a bit of  a wasted day.  But it's repaired and that's a good thing.  And I had a nice hot shower Saturday evening, once the water heater had a chance to catch up.

Time to go get some dishes washed and laundry into the dryer...the never ending saga of life...some days I really miss being a kid and living with my mom to take care of those things for me!

Ohhh, I love the pinks and greens together! It looks so fresh and perfect for a little girl. You did a great job. I know what you mean about a nice hot shower to start the day. I don't feel awake until I get out of the shower. Can't wait to see the next quilts you are working on!

Love the colors, love the pattern, adore the owls and love, love, love the quilting! You're putting that longarm to good use.

The quilt is so pretty, love your fabrics. And the back is just so fun with those owls.
You are really busy with those quilts for all those babies....
I would nottake a cold shower either, not even if it was HOT.
Glad that everything got fixed and turned back on for you.

Life with Rob and Jess said...

That turned out beautiful! I'm glad you found a pattern and went with it. Kasie will love it!!!

The quilt came out perfectly! I love the quilting design - I would never come up with something like that. I sure know what you mean about missing a shower - or bath in my case. Just can't stand it. Do you have a gas stove too? Our house is all electric and I wish we had gas too so if the electricity goes out we would be able to cook, take baths, etc. Usually, gas doesn't go out as often as electricity does.