I know it's been far too long since my last post, but I just haven't felt like doing much lately.  This winter really took a toll on me, but I think I'm finally back.  At least quilt-wise.  Other areas of my life I'm still working on getting back to normal, but I've been quilting like a maniac the past few weeks, so in that area, I'm doing great.

What brought me out of the funk?  A little over a month ago, one of the gals in my quilt guild did a presentation on the elements of design.  Little did I know that in her previous life (before she had kids - kids who are just a bit older than myself), she taught art!  Having taken the littlest amount of art possible so I could fit in all my science geek classes (and band), I missed out on all of the bones of art.  I remember making a paper mache turtle in middle school, but that's about it.  And no theory.

She shared photos of quilts and talked us through how the different elements of design (line, shape/space, texture, color and value) are expressed in each quilt.  The best part was when she pulled up photos of the quilts that won ribbons at the AQS show in Grand Rapids this past August and we talked through those.  Though some of them are still not anything I would really like, I have a whole new appreciation for what they represent artistically.  She did such a fantastic job.

But about halfway through, she was talking about lines and a little idea popped into my head.  And wiggled itself into a big problem.  Our guild had decided to participate in the AQS Ultimate Guild Challenge again this year, but I'd declined participating this time.  This little idea?  It was for a challenge quilt.  So I went home, stayed up WAAAAY past my bedtime trying to finesse the idea in my head into the "window" theme we'd chosen.  I did it.  And if this little idea causing so much trouble wasn't enough just by itself, I had exactly TWO weeks to get the quilt completed.  Top done, quilted, bound, proper hanging sleeve, labelled done.  I didn't even have fabric yet! 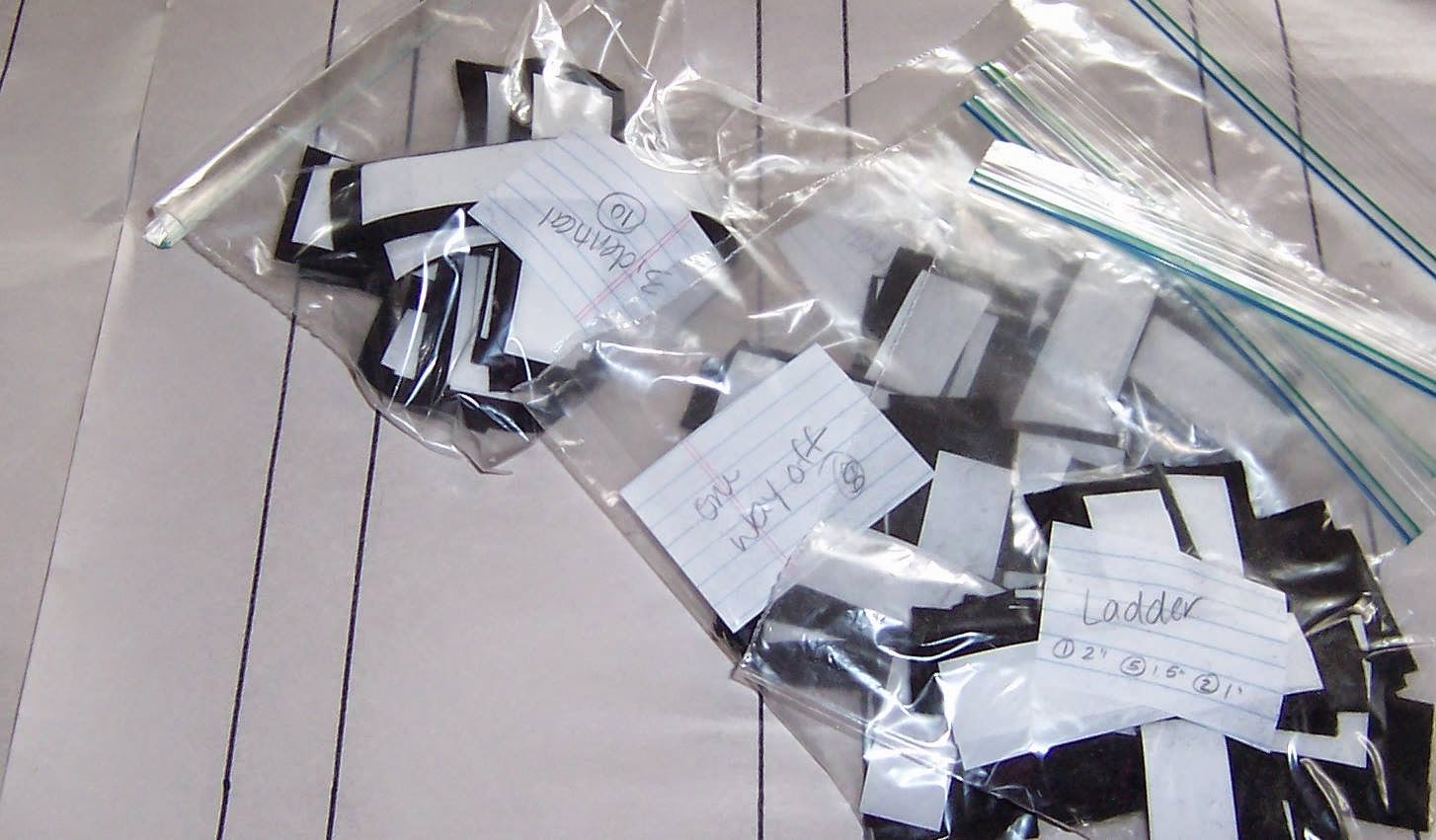 No reveal until we either don't make the cut, or after the show opens!

But it's a good thing I scrambled because without mine, we would have only had 7 quilts.  Our "Window" challenge had such varied entries, none alike, but mine, as you might expect, was pretty far out there.  I mean last year I recreated a microscope, right?

But you're probably waiting to read about Rob and Jessica's quilt, right?  This was the big secret I'd been working on - started probably a year ago, if not longer. 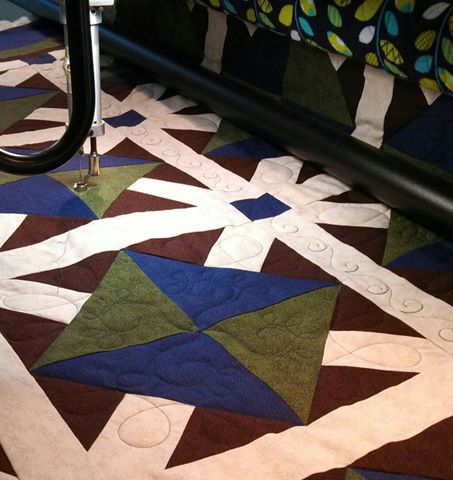 This is probably a larger photo than the one I shared last time, but it's no longer a secret.  My coworker, Jessica, and her hubby were house-hunting.  They'd found a house they really liked and were working an offer.  I decided they needed a housewarming quilt (I didn't know her well enough when they got married to make a quilt for that occasion) and after a few false starts on their end with finding the right house, I decided to just jump in and get the quilt started.  I knew eventually they were going to find a house and buy it, so why not start a new project?  (We all love starting, right?)

I checked her Pinterest boards, as she was pinning color scheme ideas for different rooms of the house.  And while I knew things like bedrooms and bathrooms might change with what was in the house, I also knew the color of their couch and that some of those color schemes, while very pretty, would be rather wild in anything in real life!  Then I found this pattern in the book "Twisted Classics."  The pattern is designed by Sandra L. Hatch and is called "X Marks the Spot."  It was done in these colors and was perfect.  Though I'd amend the difficulty level to "advanced" after having to finesse all of those bias edges (some better than others), but it turned out okay, particularly for a quilt that I intended for a couch.

I finished it months in advance, as the house they THOUGHT they were getting was a mess.  They jumped through so many hoops, I was sure that wasn't the house for them, and when the hoops finally became too much, they gave up.  Only to find that the house they'd started with, the one they were looking at when I started this quilt, was back (or still?) on the market and they snatched it up this time around.  It was meant to be and they moved in in October.  (I think it was October...it's been a while...)

All that was left was to put a label on it and take a photo.  Guess which one I didn't do?  Yeah, take a photo.  (I did it again last weekend with another quilt...darn it, I get so excited to give them away, I forget I need to do that one last, easy step!)

So, my guild has a show every March, and I asked if I could borrow the quilt back to show.  Not just so I could get a photo, but because, to date, it had some of the best, most detailed, most custom quilting I'd done and I wanted to get to show it off.  She agreed and I took a photo at the show.  Sadly, lighting wasn't great there (though I've seen worse), but I DID get a photo! 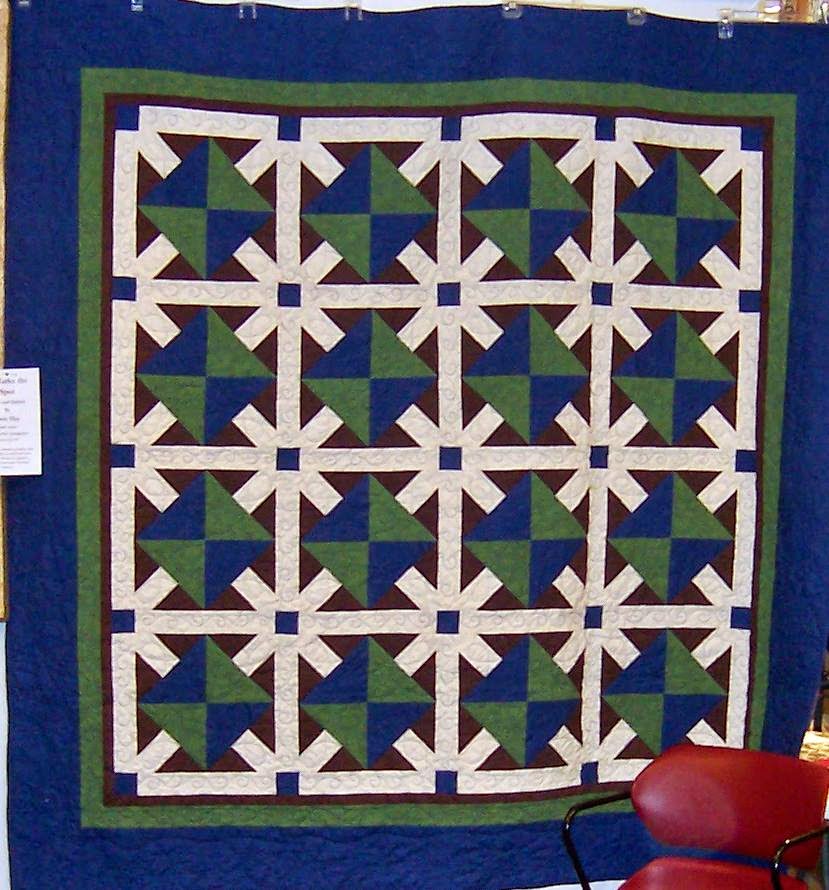 It's about 80x80" and is getting lots of love on their couch.

And our quilt show was a HUGE success.  We were interviewed by a gal from the local paper and the story was picked up by the newspapers of the bigger towns north and south of us.  A lot of advertising was done (far more than in years past, as far as I can gather) and we were open Saturday and Sunday.  Nearly 300 people came to our free show to see our work and we had a lot of fun sewing among the quilts.  We recruited a few new members this way, but also had a lot of people comment about how neat it was to see us in action, and be able to ask about how quilts are constructed.  Our 8 challenge quilts from last year were also on display and it was fun to see them all together again.

There are a number of other quilts in the works, in varied levels of done-ness around here, but this post is getting long and I'll save them for another day.  But want a sneak peak? 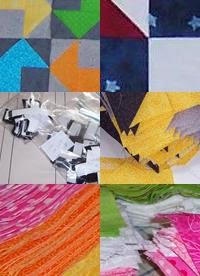 Got you curious now?

I promise to try to post more frequently.  I promise.

I'm glad you have your quilting groove back and I'm looking forward to seeing more than a sneak peek of the projects in progress. I hope the rest of life settles back where it needs to be for you as well. It was kind of Jessica and Rob to temporarily give back their quilt so you could show it and photograph it. It looks great - just right for a couch quilt.

Your quilt turned out really pretty! I'm sure it is much loved. It was fun looking back at those challenge quilts again. And yes, you do have my curiosity up. Maybe it's just me (and you maybe), but it seems like several of our gang have been slow getting started this year. I'm trying to get motivated again. Looks like you are well on the way!---"Love"

Glad you are back. Missed reading about all you do. Love the quilt.

Love the quilt and I am happy you got a chance to take a picture.
I am more than anxious to see more about your WIP. ;)
Glad you found your quilt mojo. It has been a tough winter.

I love the quilt, it is so neat. Very graphic and interesting. Sounds like you have some fun projects to show us soon. Glad the show was such a success, too. Enjoy!