I really am trying to be a better blogger.
Really.

I've had this quilt finished for a bit, but kept forgetting to get a photo, so I couldn't give it away.  And I couldn't share it here.

I gave it away Monday, but life has been, well, HECTIC around here lately.  But I'm surviving.  Just in a quilting slump again.

I teased you with this (or something like it) a while back: 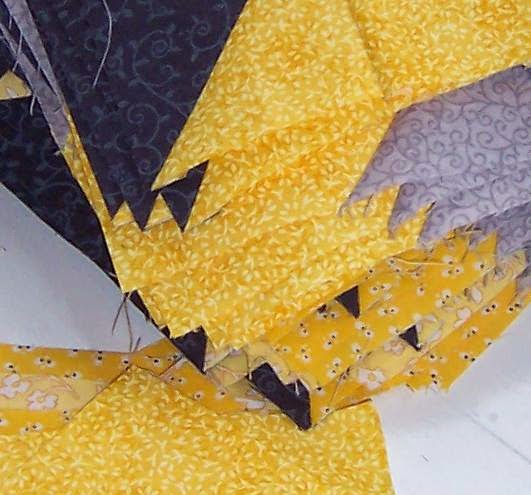 So it's a baby quilt.  And when I started it, I wasn't sure if the little one was going to be a boy or girl.  Halfway through I found out baby is a boy, but this is neutral, so it's all good.

After some fussing with points that didn't want to behave and consultation with my real-life quilty buddies (they're helpful when you're keeping something secret from the internet), I made a decision on borders (or lack thereof), and procrastinated a while and FINALLY started quilting.

After figuring out my back was not going to be big enough. 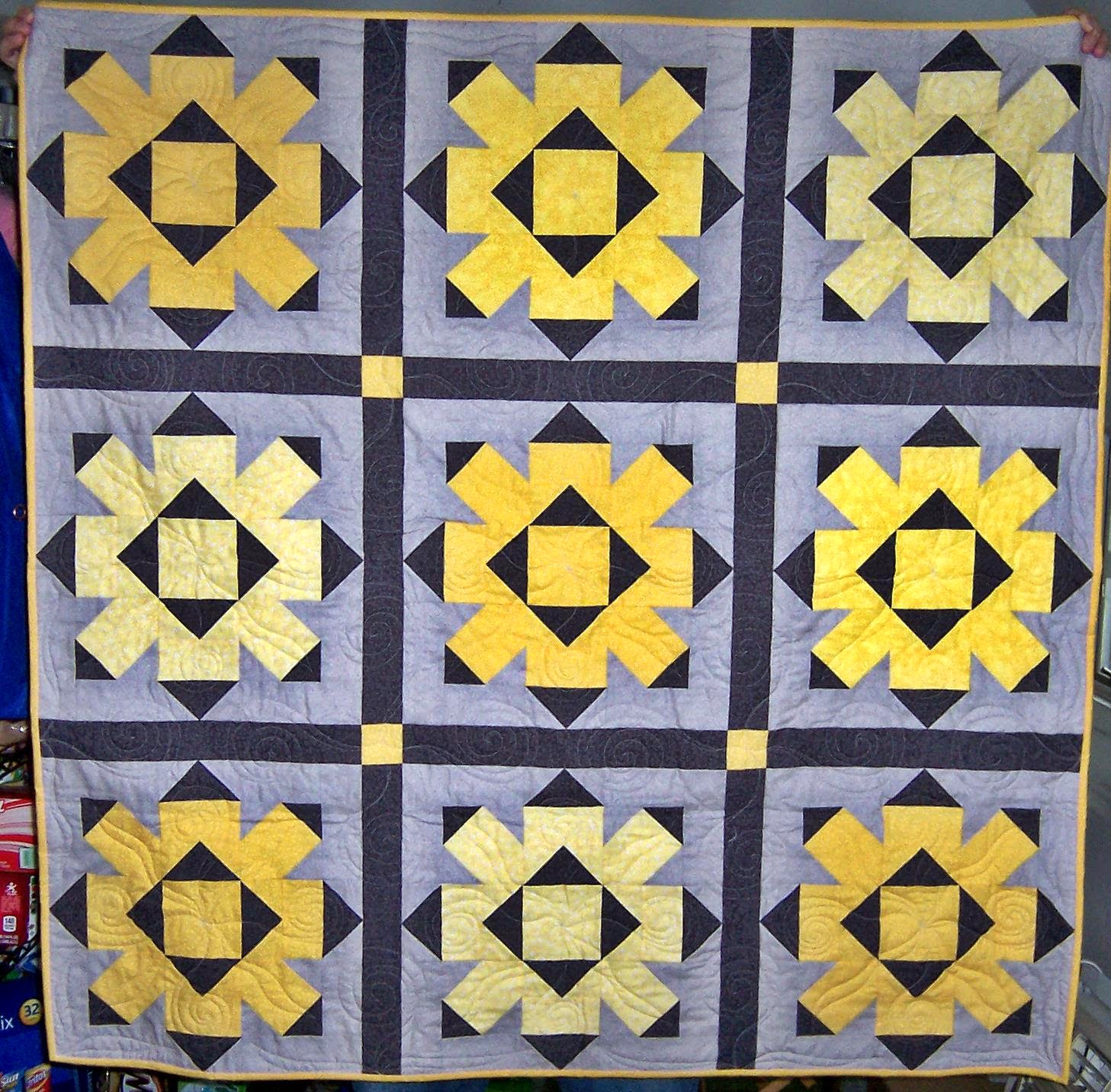 Bob is a coworker and one of the nicest guys I've met and his wife is pregnant and I decided he needed a quilt.  Well, a quilt for his baby.  Now before you start wondering about how a guy would receive a gift like this, remember the quilt we made for John?  Well, this guy is so cool, he googled "get well" and wrote it in Binary.  You know, computer code?  Because the quilt was for our resident computer guy.  I figured any guy willing to not only participate in making a signature quilt, but one who made that much effort to make his message so fitting couldn't NOT like his own quilt.  Well, a quilt for his baby.

So Monday I took it in and gave it to him.  He says he's not giving the quilt to the baby, but keeping it for himself.  So, yeah, I think he liked it.

Oh, and the back...because I hinted earlier... 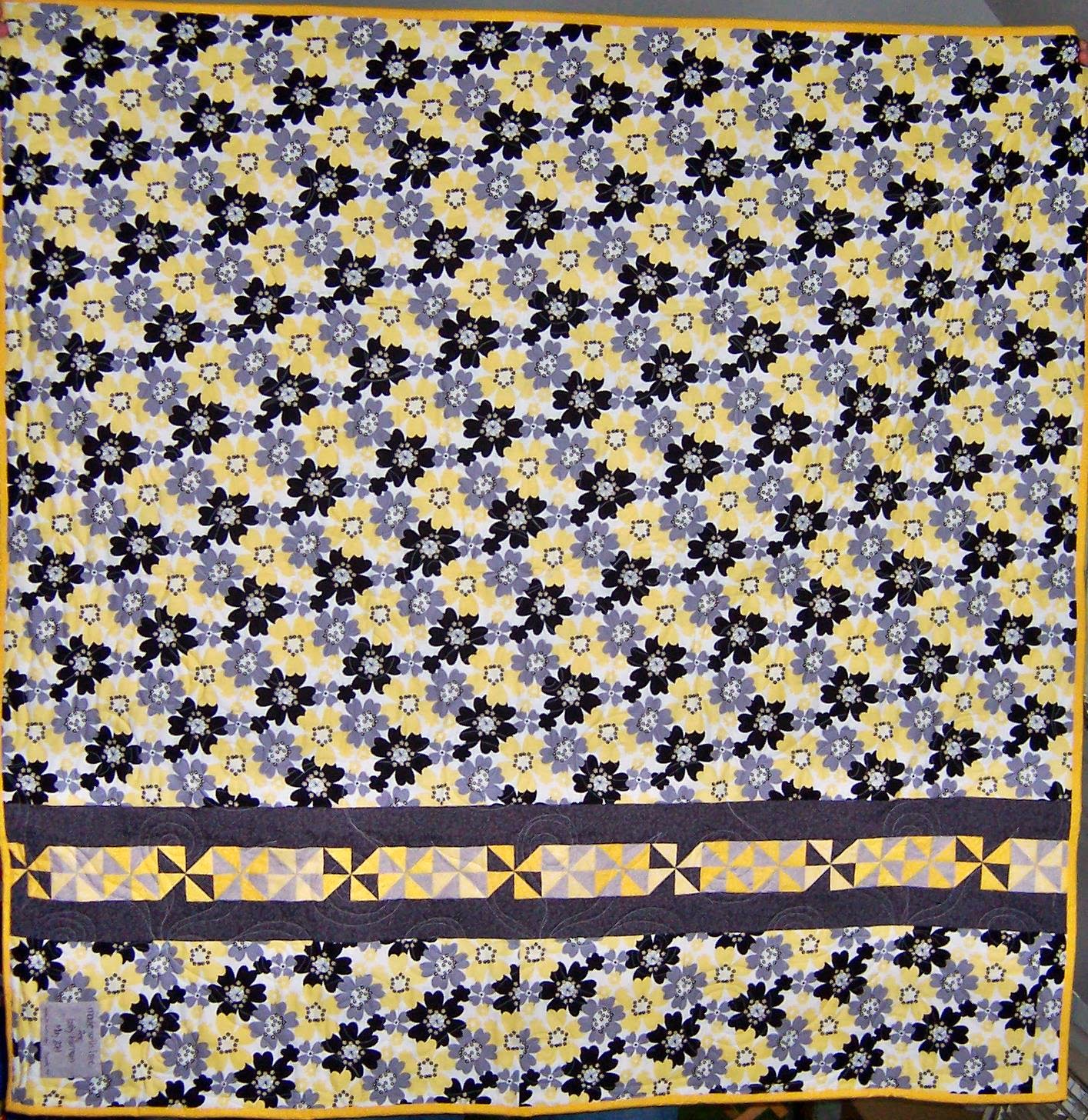 Whew!  That's a little busy when it's so small!  And the flowers are perhaps a little girly, but you tell me how many other grey and dark grey and yellow fabrics you can find at the same, single store where you bought the other fabrics and then we'll argue, okay?  Anyways, the little pinwheels were the lost corners from the blocks and I think they look pretty darn cool snug there between strips of grey that were going to be outer borders before everyone talked me out of it.

I first saw this quilt over at Little Bunny Quilts.  Not finished, but just laying there on her floor, I loved it and saved it on Pinterest (that evil place that eats time and inspires me to be all sorts of awesome, but I'm too busy being more inspired to actually BE awesome).  A little bit more searching and I found she'd made it using a pattern called Firewheel that can be found at Quilter's Cache.  Of course, she used completely different colors (as I did), but I like ours better.  (And this is not the first time this gal has inspired me to make a quilt - remember the turquoise and black quilt (scroll down) from my trip to Drummond Island in 2012?  That was her fault, too!)

And I almost forgot.  Of course I quilted it myself, so here's a photo on the longarm! 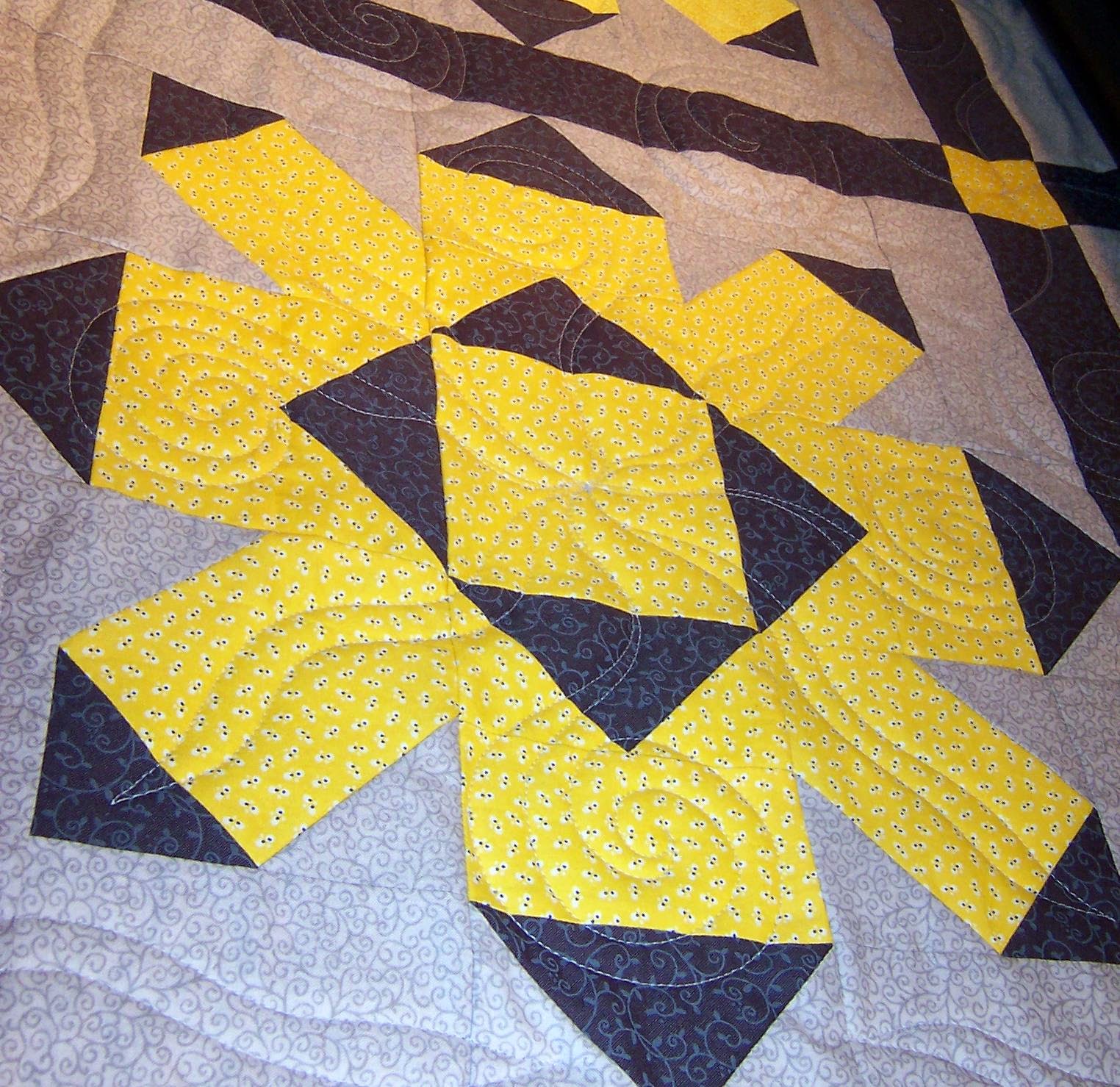 (I love swirls - they're almost as good as chocolate!)

Tomorrow at my quilt guild I'm doing part of a presentation on using the internet for quilting.  I'm doing the portion on blogging.  I made a few slides with PowerPoint, which seems like cheating - shouldn't I use the internet to demonstrate the internet? - but for a variety of reasons, I decided that having at least a few basic slides would be good.  (I also have a handout with a few blogs to visit to get them started, too - mine is included!)  I'm excited, but unsure of how it will go.  I know the level of knowledge regarding the internet within the group is extremely varied (at least one gal doesn't even HAVE internet!  the horror!), so I'm hoping the presentation will be driven more by questions than lecture, but my most basic hope is that I encourage a few people to check out these blog-things and get inspired.

I wouldn't have thought of skipping the borders on this one but it really works! You're really getting the hang of your longarm. I love your swirls. Have fun with your presentation and fall down the Pinterest rabbit-hole while you prep for it :)

What a great quilt for a little guy, or a big guy for that matter. Great colors for a guy quilt! Love that backing fabric, too. Good luck with your presentation, I know it will be great!

Katie I love that baby quilt. And the quilting looks awesome.
Your part of the presentation sounds like just the thing. One of my guild friends just asked me about things I follow. Somepeople think I am some kind of internet expert. NOT lol but I am going to get her going on blogs.
Hope you let us know how it went.

Fantastic quilt! You really know how to pick the patterns. It's really impressive. Good luck with your presentation I'm sure you will be well received.

Love the quilt! The flower backing will be great, especially for a baby quilt. Not for teen-age boys - Hee Hee! I got orders from my grandson for no flowers. But, men like flowers, so I don't really understand that - except for teen-age boys. I think I'm about the only one in my guild who blogs and has learned tons of thing from other bloggers. Be sure to report on your presentation!