It's been ridiculously cold and windy and snowy here this winter and I'm even less motivated that usual to spend time in my upstairs, south-facing sewing room.  It's much colder up there than curled up under a quilt with cats to keep me warm on the couch downstairs!

But after my Saturday sewing day with my guild last weekend proved productive, but ended early, I decided to set up my sewing machine on the dining room table.  Not only is that downstairs, but it's also a more interior portion of the house, so much warmer.  We don't eat there often and the kitties thought this a wonderful change.  (Not that they pester me any less when I sew upstairs...)  I've been good about only leaving my machine on the table when I'm done - otherwise the hubby might get a little cranky!

I had cut the remaining 8 blocks for the wrench quilt and decided to keep going... 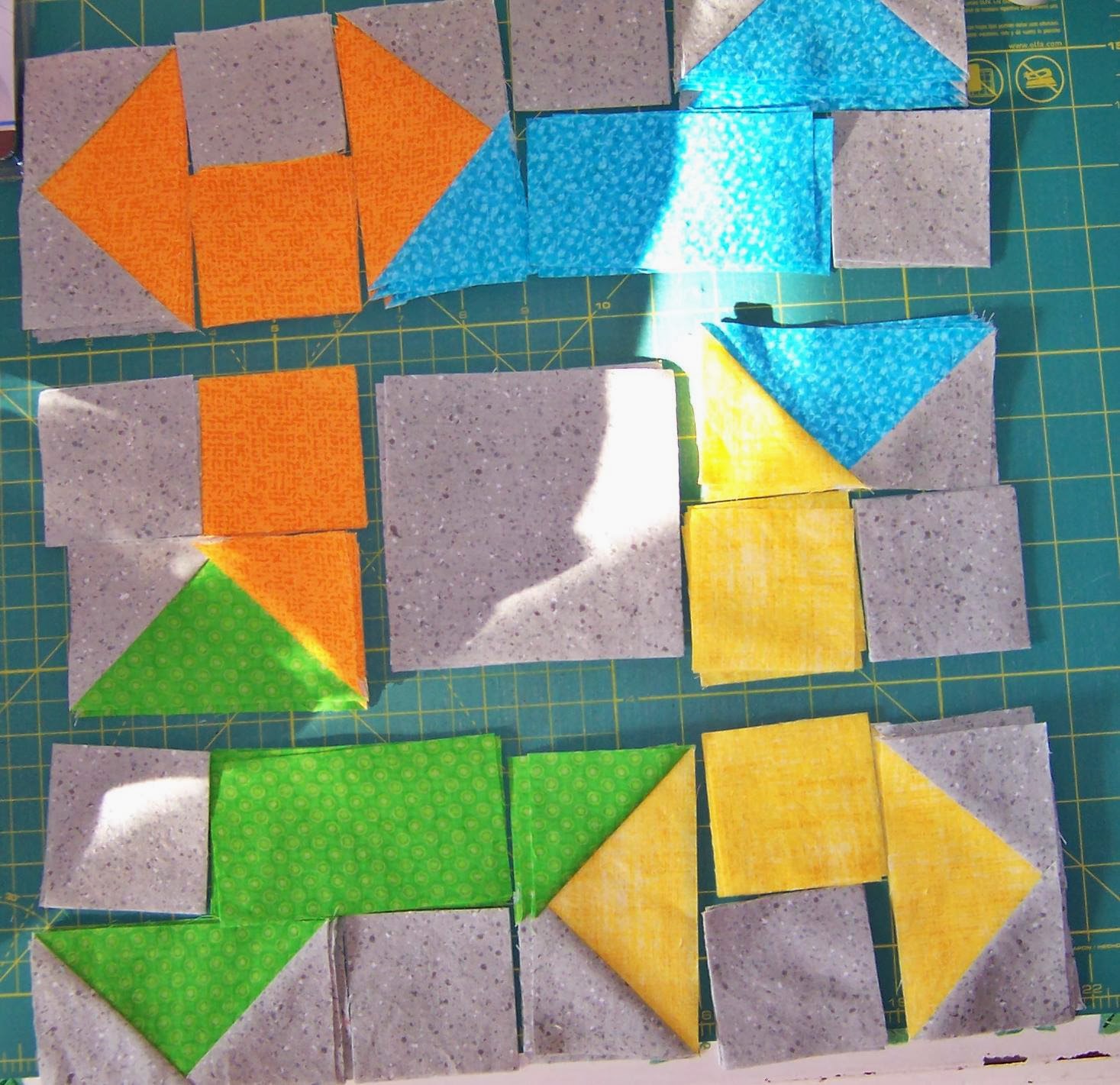 I told myself I should take some photos as I sewed, but I never did...

But Wednesday night I got the top together! 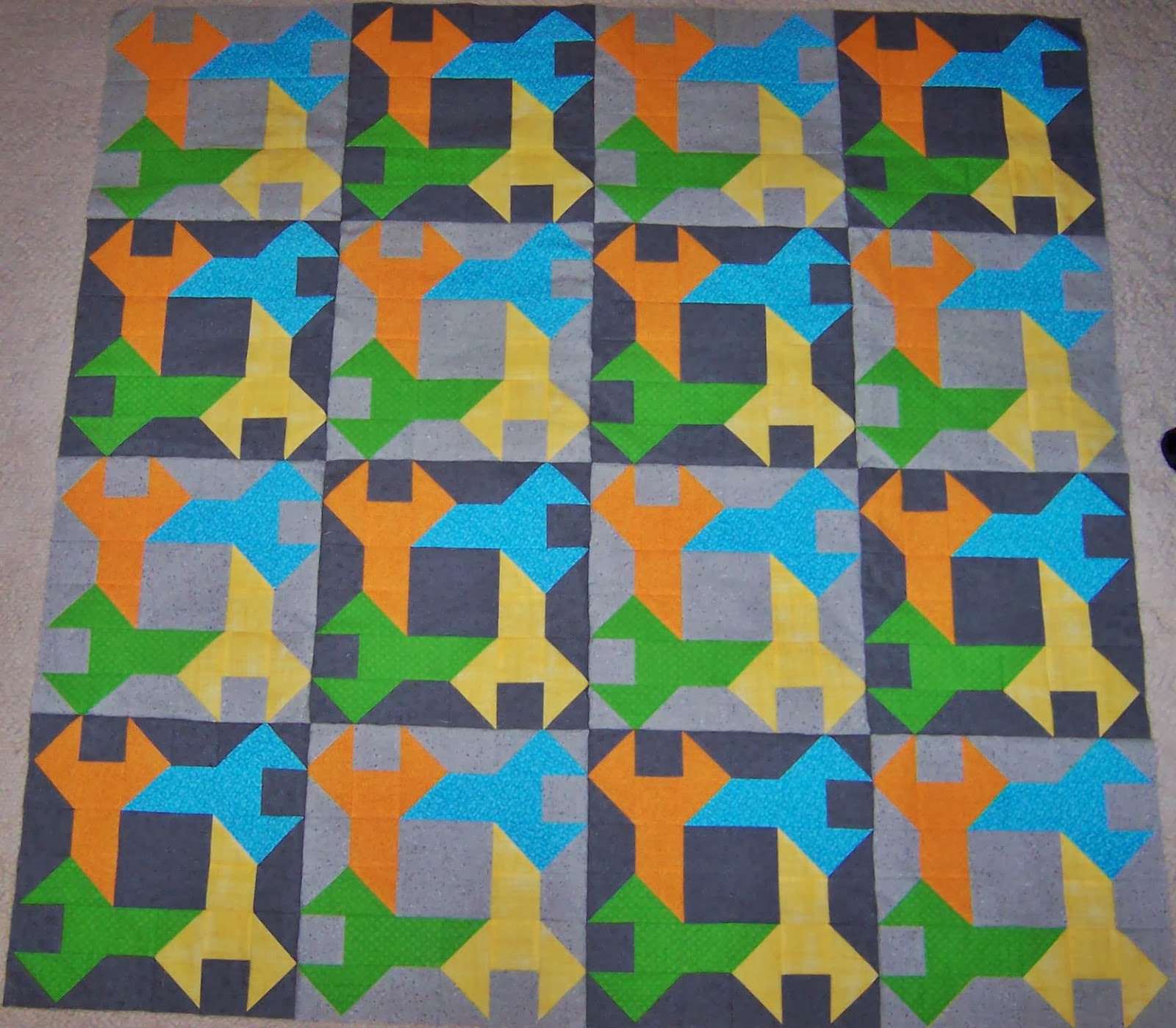 I thought about quilting it today, but last night the wind was blowing at about 40mph and though the actual temperature was 13F, the windchill made it about -25F.  And then the power went out.  For only about 10 minutes this time, but it had been one of those days where that was just the last straw.  So this morning I got up and decided I'd just chill out.  The baby isn't due until April, and this top is done far ahead of my usual schedule, so I've got plenty of time!

Today I am going to put together a flyer for my guild's quilt show coming up in March (apparently my ability to use the computer got me nominated for that job...) and then work on a quilt for my niece.  I'll do my best to get photos to share soon.

In the meantime, stay warm!  I don't know about the weather where you are, but I think we're looking at single digit temperatures for at least the next 5 days.  So long as the wind doesn't kick up, the furnace can keep up with the cold, but last night it was COLD in my house!  Spring cannot get here fast enough!

Happy quilting!
Katie
Posted by Katie at 10:10 AM

That quilt top is great! So, so fun. Not wanting to quilt when it is cold outside seems backwards, but I can understand how it can happen when the cold sneaks into the quilting space. I'm glad you are able to use the dining room table to make some progress. If you're like me, you get a bit grumpy when there is absolutely no quilting time, so I'm sure your hubby will weigh that in the balance before complaining about sewing stuff outside the sewing room!

I'm ready for Spring too!!!
Your Wrench quilt is so cute; unique I'd say. Do stay warm today and the days to come. ---"Love"

SO cold! I suggest hot chocolate, quilts and bad tv :) We've had a really mild winter so far, a few windy storms but no cold. Stay warm Karen xx

Your Wrench Quilt is GREAT!! Don't worry - you have plenty of time. There's no rule that says that baby quilts must be completed and delivered on or before the birth date - or is there?? - ;)) And it's too bad someone can't figure out how to send you some of our record hot weather - I would be more than willing to share. Stay warm!! - ;))

The quilt is adorable, perfect for a little guy! I remember cold like you are having, I did not like it! I'm so glad to live where we have winter, but not to the extreme. Stay warm!

That wrench quilt is just so adorable. I love the design and the colors. Lucky baby.
I know what you mean about the weather. I really think all the extreme cold saps the energy right out of me. I prefer to snuggle on the couch most of the time.

A perfect "boy" quilt! BRRRRRR!!! I'm saying that in sympathy as it is pretty warm here today. It's supposed to get colder tomorrow. Crazy weather!

So it's too cold for you to sew and too hot for me. We need Quilting Goldilocks to tell us where it's just right so we can move there and sew to our hearts' content. Those monkey wrench blocks look fantastic!