As I was perusing Pinterest a while back, I saw this fort made from a card table.  And pinned it.  I have about 40,000 things on Pinterest that are awesome ideas and I'll probably never make.  But this time I decided to make it for my two nephews, brothers, for Christmas.

I started doing the math for fabric, guessing amounts I'd need, and realized this was going to be a VERY expensive fort, even with cheap fabric.  And then remembered the gal who made it said she used a sheet.

Off to Wal-Mart.  I purchased two twin-sized sheets for $4.95 each.  The pieces shaped in a manner that makes for a lot of waste, but you can't beat the price.  And as they were twin-sized, I needed both.  Sadly, the sheets being of unknown (probably lots of polyester) fiber content, the scraps are not going into my stash.  But for this project, quality was not such a big concern.  Actually, something with poly that will resist wrinkles when it's packed away is probably a better idea.

A few weeks ago I completed the majority of the work, but the hemming had been effectively procrastinated until today.  Christmas is only 10 days away, so I'd better get going!

After much pinning and a few more pieces of velcro sewn on, here's my version: 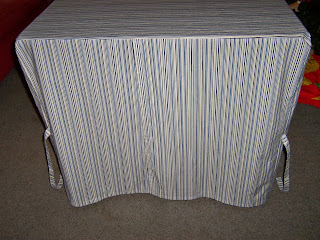 (stripes made this just a tad more difficult)

with the flaps open: 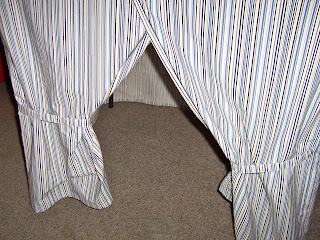 let's take a look inside...
windows? 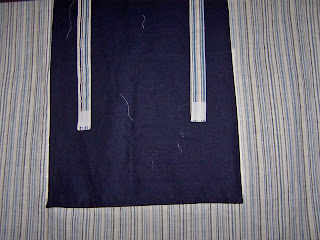 windows that can open! 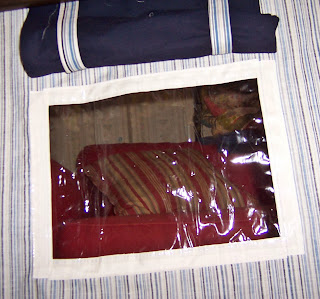 (the cats thought this was fun, as I had to climb inside to get some of these photos)

And last but not least, lighting! 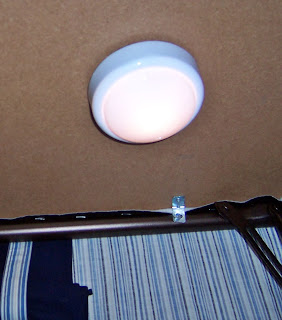 These are the lights that you push and they go on.  My hubby's idea and a very good one.  I even made sure to stick them up with velcro in a way that if the batteries run out, they can easily be replaced!

All that's left are the flashlights we'll include to make this a perfect fort for two boys, ages 2 and 4.

All of the ties that hold things open attach inside, so once the boys are in, they have control of whether flaps are open or closed.  When I was a kid, I think that would have made a difference if my mom had control of those flaps or I did, so I made sure to give the kids control.

And a bonus is that mom and dad will gain a card table to use when needed!  (no chairs, though)

I haven't been doing much sewing otherwise, but did purchase a new computer and spent most of yesterday getting it set up.  Lots of little things to deal with there, but I'm very thankful for the internet, as much of my software was outdated, but I could easily download what was needed for the new operating system to be compatible with my printer, iPod, camera, etc.

Work is crazy busy, but it always is this time of year.  We're not sure if it's because the farmers are in from the fields for the winter season, or if it's a year-end spend-the-extra-cash type thing, but whatever the reason, it's the same every year, so we're ready for it, even if it makes us exhausted by the time each day ends.

And with that, I believe it's time to go get the apple pie out of the oven and then maybe spend a little time with the hubby - he can watch football and I'll work on some hand sewing.

I'm sure the boys will love their tent. All those little extras, curtains that open and close, the window, the light and the opening at the door, will be enjoyed by a 2 year old and a 4 year old. You are such a good Aunt! This should provide lots of time pretending, kids don't get to do enough of that anymore. That apple pie sounds good, I made peanut butter kiss cookies today and am sewing the final touches on a baby quilt. Enjoy your day!

Lucky nephews :) Looks like an awful lot of fun to play with.

Katie that fort is just the cutest!!! I love the window and the light inside. You did such a great job. I am sure that poly will be more durable too for use with little boys. They are going to be so excited.
Hope the football/sewing is fun.

What a great idea for 2 little boys! I know they will have such fun in their new fort!

LOVE the tent & I'm sure your nephews will love it too!

I was just looking at one of those lights the other day that came with adhesive already on it - but changing the batteries required use of a screwdriver on the back side. If it had ever been stuck to anything - you'd never be able to replace the batteries.

So - very smart about attaching the light with velcro! That is an awesome Christmas gift :-)

What a cool "man cave"! I'm betting the kids didn't have to be looked for; they were probably there all the time! What fun! ---"Love"