Our IT guy at work is out battling lung cancer.  He's been out a while and I've kinda had this idea to make him a quilt since we first heard rumors why he was out.  But he's a very private person and only just recently made it public knowledge what's going on.

Then, a coworker decided we'd put together a basket of goodies for Thanksgiving for him.  About two weeks ago.  I managed to have a week of thick-headedness and then realized this was the PERFECT opportunity to get him a quilt.  A signature quilt from all of us.

Friday I decided to do it.  The 15th of this month.  I stopped at JoAnn's and bought a bunch of Kona white.

Saturday was my quilt group sewing day.  I packed up all my blue and green fabric scraps and the freshly washed Kona white and headed out.  I made 60 blocks.  Simple signature blocks, three 2" strips for a block that finishes 6" square.

Sunday I put together a few envelopes of instructions, pens and blocks.  And crossed my fingers the information included would be enough to get it done right but not too much that people would quit reading before they had all they needed.

Monday I started the distribution.  One of the customer service gals was really instrumental in getting those envelopes moved around quickly.  Without her, I wouldn't have had 36 signed blocks (all I was going to get) on Wednesday.  My goal had been Friday, but Denise rocks!

Tuesday I headed back to JoAnn's for border fabric and backing.  Into the washer as soon as I was through the door at home.

Wednesday night I determined a layout on my design floor and started sewing blocks together.  And realized I had missed the guy who was putting together the basket!  Oops!  Easy to fix, but boy did I feel like a fool.  I also cut and pieced and cut strips for borders and binding.

Thursday I finished putting blocks together and sewed on half the borders.  Went to my quilt group to show off the mostly-finished top and then left early to sew some more!

Friday I finished the borders, prepared the back, prepared the binding and got the batting out to relax.  And doodled until I'd figured out about what I was going use for quilt designs.

Saturday I loaded it on the longarm and started quilting. 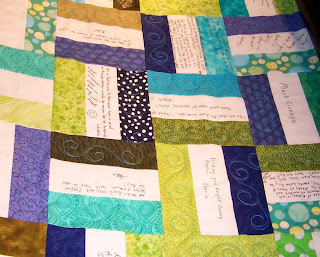 The colors aren't great here, but you sure can see the quilting!

Saturday afternoon I sewed down the binding and label.  A whole 24 hours early!

I had a lot of fun making this, even with the short deadline.  I used all scraps for the colored portion (save the outer border) and enjoyed remembering where almost every one of them came from.  The finished quilt has a 7x8 block layout that finished 56"x62".  Not all of the blocks were signed, but I enjoyed reading each one of them.  Even with the little bit of space and (mostly) short messages, I could see the personality of each person and it adds so much to the quilt.

Monday afternoon, the 25th, John's sister came and picked up the boxes of goodies.  Included was the quilt. 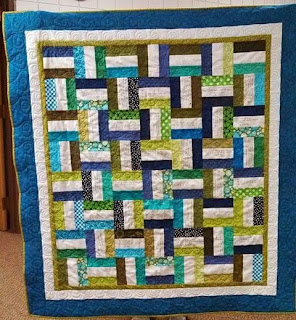 With a flannel back and loads of well wishes, I truly hope this will help keep him warm and give him an extra boost in his tough battle.

This was not the only quilt completed this month, but I'll save the other for a later post.

In other news, my mom is looking for some fabric to finish a quilt.  Does this look like something you might have in your stash?  She's willing to work a generous trade if you do! 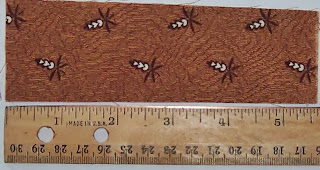 It's a Henry Glass fabric from the line Peddler's Pack.  She gave me the number GLA2936/9 but I'm not sure where that came from.  The color here is a little redder than actual (at least on my screen) and she's looking for at least a 2.5"x16.5" piece to finish sashing, but would like as much as a yard, as I believe she wants to use it for binding as well.  Let me know if you have any!

And with that, I have plenty of projects I should be working on, so it's time to get sewing!

When there is a deadline, isn't it amazing how much can be accomplished. The quilt you made for John is a great pattern for a signature quilt. I am sure the warm wishes will comfort him in his battle, you did a wonderful job and fast! The fabric your Mom is looking for is so pretty, wish I had some, I would share. Hope she finds it to finish her quilt.

That was an amazing finish! Good to know it can be done when one has to do it. BTW, I used to have your Mom's fabric and will check when I get home to see if there is any left. I'm sure if I have any it will be on the bottom of the stack somewhere.

You sure know how to quilt up a hug in hurry! I'm sure it will be much appreciated. Sorry I don't have that fabric. I hope someone is able to help out.

WOW!! What a WONDERFUL quilt!! It is sure to help keep John warm and to let him know that he is not alone in his battle - ;))

I don't have any of the fabric that you Mom is looking or - but I have a tip for getting your batting to "relax" quickly. Take it out of the package - unfold it - fluff it up a bit - then toss it in the dryer on "air-no heat" for about ten minutes - it fluffs right up. Of course, if it's on a huge roll for your longarm - ignore what I just said - haha - ;))

Way to rock an emergency quilt. Love the colors and the quilting is great!!! Did you custom quilt that? What a great time to sneak in that quilt of support. ;)
Happy Stitching