But Merry Christmas to everyone!

A week ago, I never expected my life to have been so crazy just before the big holiday.  I was baking a cheesecake and preparing for a potluck lunch and a day off work (and a long weekend!).  Rumors of an ice storm were swirling around, but I never put a lot of stock into weather predictions.  Here where I live, as it is probably everywhere else, it's a best guess and I refuse to live my life in fear of weather events.

Friday dawned wet and drizzly, but not freezing, so I made my way to the monthly sewing day (which is always Saturday only for me, but this month, I could attend on Friday!) and to my potluck lunch.

Saturday was another wet, drizzly day.  Again just hovering at freezing, so driving could be bad in spots, but I've grown up in this kind of weather, so I know to take it slow and be extra careful at corners.  Another day sewing, with an early exit to see Anchorman 2 with the hubby proved productive.  I finished (as far as it will be until it's quilted) block 3 of the Merry Merry Snowmen quilt: 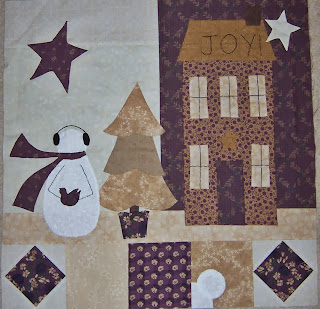 And I cut out and started sewing block 4! 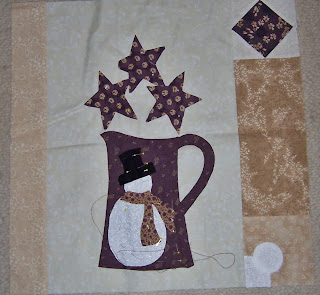 It was the hubby's weekend to work, so Saturday night I sent him off with a promise to be careful as the roads were bound to get worse with the expected drop in temperature as night set in. It was still raining.

I went to bed, snuggled under quilts and cats, with an electric blanket adding an extra layer of warmth, but happy thanks to a few productive quilty days.

And the rain turned to ice.  I'd wake to the telltale snap of a tree branch giving up the battle with the weight of ice, followed by the actual crack and crash.  Cringing with every one, at my beautiful 100+ year old trees being damaged.  And then it happened.  The power went out.

We're on the same grid as the local Wal-Mart, so we aren't usually out of power long.  Being one of the larger retail establishments in town, and being a few days before the biggest retail event of the year, I was hopeful we'd have power restored soon.

Sunday morning dawned and the house had only lost a few degrees.  The temperatures were still hovering near freezing and the wind wasn't blowing, so that was helpful.  We headed down to the hubby's sister's house to shower and have dinner.  Lucky for her, she was the only member of the hubby's immediate family to have power.  Lucky for us, she was amazingly generous and let us shower and hang out for a bit.

We hoped power would be restored when we returned.  It was not.

I hoped it would be restored while I slept - with a few extra quilts and the cats snuggled a little closer.  It was not.

Monday I smoothed down my hair as best as I could, knowing I wouldn't be the only employee with crazy hair and little sleep from lack of power and I was not wrong.  Thankfully the day was crazy busy and I had little time to worry about how cold my house might be or when the power would be back on.

Monday night it was still out, so we returned to the hubby's sister's house for more showers and she cooked us dinner.  As if the free hot water wasn't enough.  I was thankful and the dinner was delicious.  Time spent with the nephews was great fun, as I was wrapping Christmas presents while the hubby showered.  Everything that came out of the bag was questioned by my 2-year-old nephew - "for me?"  Sheets, UnderArmour, princess castles alike - all should have been for him!  Little did he know his gift was still at home in my living room, unwrappable!

We returned home Monday night to see Wal-Mart lit up like normal (they'd been on generators for a day or so up to this point) and cheered.  Until we realized that Wal-Mart was about the only thing with power.

The temperatures dropped Monday night, so the house was 44F when I left for work Tuesday morning.  Again with ruffled hair, but trying to be positive.  The kitties were getting cold and I was worrying about pipes freezing, but there's really little you can do.  Plan B was forming in my head, but until I knew I had to put it into action, I couldn't let it take over.

Again a busy day at work to keep me from dwelling on what I couldn't control, but at 10:45 my phone rang and the hubby asked "Can you hear that?"  Well, in a room that has a walk-in cooler with a fan constantly running, a little space heater to help with tests that are finicky when it comes to temperature and an incubator with a fan whirring in the background, hearing him was a little tricky!  But I guessed it was our furnace I was supposed to hear and it was.

I was so relieved.  The house was still only about 60F when I got home, but that's a VAST improvement over 43F, which is where it was when the power came back on.

There are still many people without power.  And we are in constant fear that the tree that the power line runs through between pole and our home is going to leave us without power again, but as the power company drove a truck through our yard to get to another power pole, I can't imagine they've missed it.  And we expect they'll be back to do cleanup when everyone has power again.  No way am I going to call and demand anything that silly just yet!

We lost a few things in the fridge, but our pipes did not burst.  Plaster (no drywall here!) did not crack.  No trees damaged the house or cars or barn or garage.  We are very lucky.  And I am so thankful for all of the people out there in the cold, working through what should have been a family holiday, to give us all back the electricity we've all become so dependent on.  If I had been here when the crew drove through my yard, I would have gone out and given hugs to every one of them.  And freshly baked brownies if I'd had the power to do so.  (ha ha, power, literally!)

But we didn't let it dampen our holiday spirit.  Tuesday night we traveled to my parents to celebrate with my family.  My mom did not disappoint, making both a ham and turkey breast, as well as all the delicious side dishes.  We got squeals of delight from all three nieces when they opened our gifts and my mom was so excited about a quilt book I'd bought her - with her watching and requesting it - because she hadn't remembered it at all!  (To be fair, it was in July...)

Wednesday afternoon, we celebrated with the hubby's family, in a newly warmed home of my brother-in-law (he'd regained power early that morning) and the kids again had a blast opening presents.  The table-fort was given, but somewhat ignored at the time.  With everything else going on, I knew it would probably see that fate, but my sis-in-law sent photos today of the boys playing in it and loving it.  I'm glad, though I didn't really have much doubt.  I knew once it was home and life settled down, they'd do some exploring and figure it out.

Today and tomorrow I'm off work and my original plan, weeks ago, was to sew today and tomorrow, but with the weather changing plans for us earlier this week, I'm content to just enjoy reading and snuggling kitties.  I did get up early to pick up a few needed groceries (and was pleasantly surprised at the lack of people at the store - I think there were as many bucket trucks and tree cleanup crews in the parking lot, awaiting dispatch, as there were customers!), baked some brownies, did a few loads of laundry and loaded some chicken into the crock pot (making a new recipe for taco chicken bowls tonight), but I'm enjoying just relaxing today.  We'll see what tomorrow brings...

What a week! I'm so glad your power was restored before the pipes burst! Enjoy your renewed enjoyment of a cozy home, and enjoy the rest of the holiday season (we count holiday all the way through New Years' Day).

I'm glad you came through the power outage fine. Some homes in the Dallas area had that problem a couple weeks ago, but we didn't thankfully. That's what I don't like about having an all electric home. The house we grew up in had (and still has) gas for stove and hot water heater and some other kind of gas for heating, which makes it nice - my sister lives there. BTW, Eli opened one gift and was so happy with it (a police car) that he didn't want to open any other gifts! Kids are so funny! I got a Dear Jane book that I had requested and think I'll get started - maybe join a group, but will not hurry with it - as if you can! Happy New Year!

MERRY CHRISTMAS, KATIE. Loved your story and glad you have power now. HAPPY NEW YEAR TO YOU AND YOURS!

I love the applique blocks you have prepped, they are so cute! Sorry to hear of all the problems with the power outage, wow! That is something you don't really think much about until you don't have any! Glad it came back on and I hope it stays on for you.

Brrr I can notimagine a house that cold. I am glad that you have family near enough to let you shower and to feedyou a hot meal.
So glad it did not ruin your holiday. I bet the boys will be playing in their gift for a long time.
Enjoy whatever you do on yourdays off. Happy New Year!!!

We experienced the same type of power outage at the beginning of October, but it was coupled with 23" of snow, so we were unable to leave our house. Luckily we camp, so we had a propane stove to cook and our water heater is gas, so hot showers. The temperatures weren't too cold either, so the house stayed bearable. Gotta love the linemen who keep us with power.

Merry Christmas & Happy New Year Katie! Those ice storms must be quite something - we forget how much we rely on electricity. I'd send you some of the 40 degC plus weather we are having here but it's darned difficult to wrap. Delighted that despite the setbacks you had such a lovely festive season. BTW-your snowmen are adorable.

No power for such a long time???!! How scary and uncomfortable that must have been! My hands are freezing after just reading about it! Glad you survived with a good spirit through it all. You, too, are getting a head start on next year's Christmas quilt; good job! ---"Love"