I was so excited today to post.  I FINALLY got to give away the quilt that I'd been keeping secret for so long.  And then realized I never took photos of the finished quilt!  I thought I had.  I thought I also had photos of it on the longarm, but can't find those either.

So plan B.  Hannah's quilt.

I've shared bits and pieces of the quilt, but never made an official post, as I was waiting for the young lady to graduate.  It took a bit longer than we expected, but we did attend her graduation ceremony this summer.  The quilt was hanging and she loved it.

It all started with a group of fabrics I wasn't sure of.  I worried they'd be too busy... 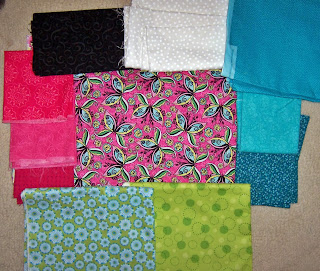 I effectively procrastinated printing the photos for the longest time.  And once I finally did it, it was a hassle and I will probably procrastinate doing them again...if I ever get that crazy.

I bordered each photo with enough fabric (single strips) to make the blocks all the same size and then worked on the layout, making sure no two of the same fabrics were touching each other too much and the photos were well distributed for who and what they contained. 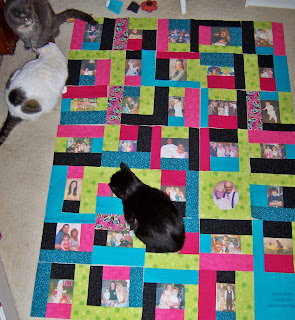 As you can see, I had loads of help.

I also had one extra square where I embroidered her name, school and graduation year.

I sewed it all together and bordered it and procrastinated a little more because I kept thinking feathers would be the only logical way to quilt this.  I've researched a lot more since then and have a few more patterns in my hat, but for my first go at feathers (a pattern I'm not so fond of in the first place), I think it came out okay. 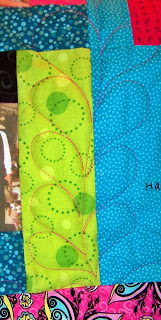 Her mom was so excited to get it when it was finally finished, she ended up not waiting until Hannah graduated and gave it to her at Christmas this past year.  I think there might have been a contingency and they still may be fighting over where it gets to live now that's officially been given and she's graduated, but both mom and daughter love it and appreciate it. 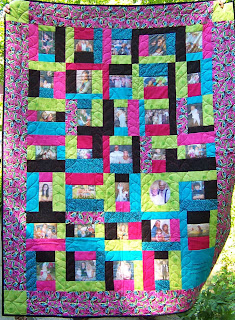 (Would you believe I hadn't even edited this photo yet?  But at least I took one!)

I promise to get a photo of the quilt I gave away this week soon.  My friend is a photographer, so she might have some fun with it, but first she needs to return home.  She's on a 2-week stretch of being out of town for one thing or another.  But I'm pretty sure she liked the quilt...

As a result of giving away the quilt at work, I've been asked to help make another for a coworker who is pregnant.  I believe we've got a pattern in mind and will be fabric shopping Monday.  I'm excited to start another project, but you all know I really do NOT need one!  This one has a short deadline (they're doing a shower of sorts for the mom-to-be on the 22nd of this month), but I can do it!

Not much quilting has been going on this week.  I have been working on the snowman block and have just a few pieces of block 2 to get sewn down (which is where I'm headed when I'm done here) and effectively procrastinating sewing together the blocks for Mandarin Express.

I have spent some time computer shopping (this laptop is aging badly!) and preparing to turn over my secretarial duties to another guild member and doing odds and ends around the house to prepare for winter, but I can't say I've been doing a lot of anything.  Maybe next week will be more productive?

The quilt is so pretty, I love the bright, happy colors. It will be a wonderful keepsake with lots of memories stitched in. Have fun with the baby quilt, it is always fun putting one of those together. I think you have been very productive, maybe not a lot of stitching, but it sounds like you got plenty done!

It's easy to see why EVERYone loves that quilt! What a beautiful treasure! Your feathers look great too! Hope you find your other pictures somewhere. ---"Love"

The graduation quilt came out so great. Lots of fun, happy colors. You did a beautiful job with those feathers too.
The thing I do best these days is procrastinate.
Happy stitching this week.

Hannah's quilt is sure a winner! I love the feathers. For the most part, making a quilt on a short deadline isn't much fun, but…on the other hand, it is nice to get something finished fast instead of it spreading out over months - or years!

That turned out neat~! Man, your first feathers sure look a LOT better than mine did! :D

Hannah is such a lucky girl! It's gorgeous and the bright colours just sing. Looking forward to seeing pix of the other quilt. Stitch on!