Today, instead of working on the many projects I should be working on, I decided to start a new one.

I said at the beginning of the year I wanted to do better with managing my scraps.  And had seen some very pretty string blocks, so decided I'd make use of some of my scraps making those.  A while ago.

So today I decided to get started.  I had two shoeboxes plus of scrap strips just tossed in the boxes.  Usually these would go to my mom for her string quilts, but she has about two dozen other people giving her strips and really doesn't need mine.

As I sorted, anything that could get a 2.5" square out of it, I cut that first.  I have no idea what the squares will be used for, but eventually that will become a project.  If they're all cut, it should be easier, right?

Then, I sorted by color.

I worked for probably four hours and have this to show: 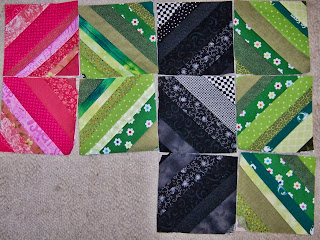 I have yellow, blue, turquoise, red and purple blocks started, but not enough different strips to finish.  And more to start more black, green and pink blocks.  I'm not sure what I'll end up doing with these, but I'll just make them for a while.  The phone book has about 4000 pages, so it's not like I'm going to run out of foundations any time soon!

So technically, I worked on something I'd started a while ago, right?

One shoebox now contains a jumble of light strips not big enough for 2.5" squares, a few strips of flannel from quilt backs and a few odd block parts that I'm not sure what to do with.  The light strips will go to my mom, as she does super scrappy string blocks and always complains of not having enough lights.  The remaining things...hmmm... 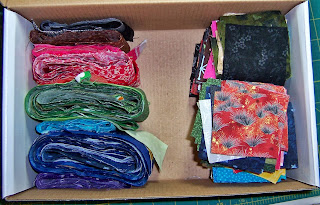 Yep, organized!  I decided since I'd pressed all those strips (after they'd been mashed into the boxes previously), I sure didn't want to do that again.  And this way, when I finish a project, I can just add to the roll instead of starting a new pile, right?  And no sorting!

The stacks of squares are almost as tall as the box, and I cut a lot of those as well.  I had my iPod (until it ran out of juice) and then Pandora rocking the whole time, so it was pleasant.  And the back and forth between iron, cutting table and sewing machine kept me from getting bored or sore from doing the same task.  Moving cats off my sewing chair every time I went back to the machine did slow me down a bit, though...

Some of those squares will end up in this project: 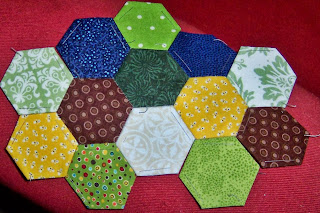 Now before you all go shouting from the rooftops that Katie, too, has Hexie Fever, let me show you the reason for these...

I have naughty kitties.  One who is no longer with us started this destruction and it's just continued.  It's gotten so bad, I don't think repair is possible without looking hideous.  So I've seen some really cute hexie patches on couches in places just like this thanks to naughty kitties, so I figured why not?!  The hubby has no idea what's going to happen, so we'll see what his reaction is, but the $3.50 bag of 100 1" hexie cardboards is far cheaper than a whole new couch!  And if you don't know a quilter lives here when you walk in, well, you must not be paying any attention.

But I am not a hexie convert.  I've done them once before and was not impressed.  While it was nice to have something to keep my hands busy last night while watching a movie, they are not my favorite hand-piecing technique.

And one last photo, because I didn't share it after the canning madness two weeks ago: 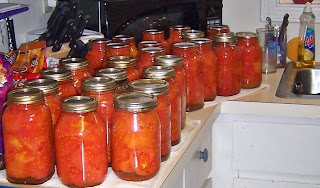 I believe the final count was 39 quarts.  We had quite a few green tomatoes that we left on the counter to ripen.  Unfortunately, many of them spoiled before ripening, so the last few quarts (I'd guess 6 or so) didn't get canned.  Some are in the fridge for eating, so all was not lost, and it is nice to have fresh, vine(ish)-ripened tomatoes on salads and sandwiches.  These will taste so good this winter when I'm making soups and such and we know next year to get the tomatoes a few weeks sooner so as to get better tomatoes overall.

This week I hope to get the blocks put together for my Mandarin Express quilt (and take photos...duh...I had the camera up there, just inches from the parts today...), mostly so I can show them at my quilt guild meeting this week.  Other members are showing off things they worked on at retreat and have since finished, so I'd better get crackin'!

Good for you! I need to do the same thing! You'll have another pretty quilt in no time! Wish I had a jar or two of those tomatoes! They look yummy!---"Love"

I love those string blocks! The pinks and greens are so yummy. I know you will make something amazing with them.
I like howyou wrapped the strips you still have. Istarted doing that and then started just tossing so now they are a mess. Maybe I can sort it all out one winter day.
That's my story.... ;)
All those tomatoes look so good. Wish I knew how to can.

You have certainly been busy. That is a great way to organize your scrappy strips and the blocks are so pretty. I still love the green with little flowers on it. I am anxious to see the hexie patch, I think that is going to look so cute and unique. Those tomatoes look so good. Nothing beats nice ripe tomatoes, fresh or canned.

You won't get any arguments from me when you start using up scraps - especially if you go and make something as delightful as this! Those tomatoes look fabulous!

Good strategy for scrap management. My challenge is to use up the scraps I have nicely managed, but you have a good start already in those string blocks. I'm sure those will turn into a great quilt. The patchwork patch on the couch will be a fun touch, and definitely less detrimental to the budget than new furniture - especially since I don't think you'd dispose of the kitties along with the old furniture!

Love your gorgeous string blocks! Nice idea, too, with the rolls to add onto as you go. Hey - have you ever seen those claw covers for cats? It makes it so they can't scratch your furniture up. Maybe that would work for you guys?