Though I didn't really do much until this weekend, I have quite a few quilty things to show today!

First, I finished sewing the hexies together, using the actual couch as a "design wall" to figure out what I wanted where: 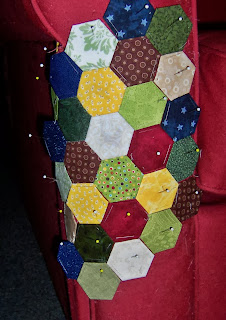 With this photo on my phone, I sat on the couch and sewed everything where it should be and have this to show for it: 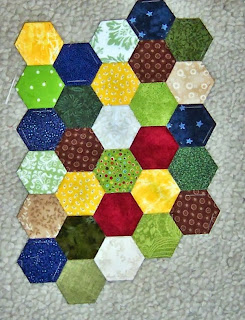 The hubby will be out of town this coming week, so I plan to get it sewn to the couch while he's absent.  Maybe he won't notice?  Or if it's already sewn down, he won't complain as loud?  (But really, can it be any worse than what's there currently?)

I still have to figure out exactly how I'm going to get those basted edges to stay put without the papers inside...I think a good pressing should do the trick...

Two weeks ago, I was talked into quilting another charity quilt.  I had said I was done with them after having so many problems with those brought to me already (backs too small, quilts not even close to square, etc.) but the gal who asked had previously brought me one that was okay, so I agreed.  I got it Thursday. 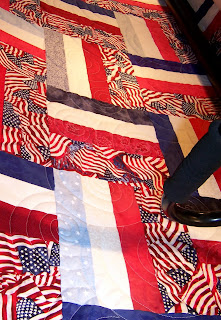 ...it's done (though the reds look a little orange in this photo), but not without trouble.  Seems whoever cut a hunk of fabric from our bolt of backing for this quilt didn't measure quite right.  I added 15" to the end of the backing to make this large enough.  But not before getting to the end and realizing what was wrong, having to unload the whole thing, add the strip and re-load.  I know the gal who gave me the top would be horrified she'd done that to me, so I'm not going to say anything to her, but I am CONFIDENT I will no longer be quilting for FREE for others at this point.  (And probably not for pay either...I just don't have enough hours in my day, what with working full time and all...)

This quilt will also be going to the local VA Hospital for Veteran's Day.

And then yesterday, my guild had our monthly Saturday sewing day and I got to go!  Though I wasn't terribly ambitious and was very easily distracted, I finally got the first blocks from Mandarin Express sewn together! 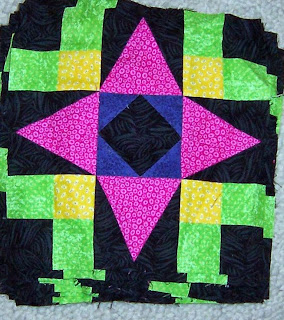 And got a good part of the second blocks finished as well! 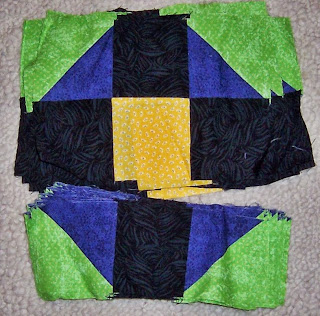 Now before you think I did all of this yesterday, I did not.  The first blocks simply needed the bottom third sewn to them and the second blocks needed a little more, but are a simpler design.  But with 32 of block 1 and 31 of block two and a lot of points to match, it took quite a bit of effort.  The points still aren't great, but I'm okay with it.  This will (eventually) live on my couch, so it doesn't need to be show-perfect.

This next week, I hope to get a lot of sewing done.  With no hubby home for dinner, I can cook simpler meals and not feel guilty spending time in my sewing room instead of with him.

But with that said, I need to attend to the meatloaf dinner I'm making and should probably go spend some time watching football with him (snore!)...

I love your idea for patching your couch. We used to have cats and I spent much time trying to patch our couch and chair. I ended up making a slipcover for the chair (after said animals bit the dust). Originally, though, I used the extra arm covers made of the same fabric to cover the ruined sections from the cats using it as a scratching post. When those 4 covers were used up, I put some clear plastic over some of the parts that were in the back. Yours is definitely a cuter cover!. Finally, the couch was beyond repair and we put it on our front porch with a sign by the street saying we had a FREE couch available. It didn't take long for a local yard worker to pick it up! We got a "new" couch at a thrift store. We had cats for years, but now with our kids grown up and us traveling, we are happy without them. Your couch is going to be quite bright when you get the new quilt done! Wow! The colors are great!

Looks like a great solution for a couch that has had too much kitty love. If you press the hexies really well before and after you remove the papers it will be easy to keep the edges turned under.
I like the blocks you have been working on. I bet you get that whole top done this week. And probably lots more. Have fun.

Those hexies are a great idea to fix your problem! Do you have a plan to stop the offender yet? I'd hate for the same thing to happen to all your hard work. Your blocks are looking great too. I agree totally with your decision on quilting by requestfor others (unless it's your idea for a gift, of course.) I hardly have time to do my own things, and I'm retired! Hope you get lots done this week! ---"Love"

I'm really looking forward to seeing your couch transformation. The VA quilt looks great but what a shame the backing wasn't the right size. I measure about a dozen times to be sure! Love your bright blocks and last time I checked quilt guild is meant to be enjoyable - not a sweat shop. Relax and enjoy the journey.

I think the hexies on the couch are going to look wonderful! You can always make a mirror image of this one and put it on the other end just to decorate it, too! Once it is in place, how much can hubby say, it will be better than the kitty fray. I can't wait to see more of Mandarin Express, those colors really pop. I've always shied away from sewing for others, it is difficult sometimes. Besides, you have so many wonderful projects of your own to do, have fun!

Your hexie couch is going to be fun - why would hubby object? :) I love your Mandarin Express blocks in those fabrics. Enjoy putting it all together. I can absolutely understand deciding to not quilt for others. It's a big job, especially when uneven tops or short backing make it more difficult. Good for you for trying, and good for you for avoiding the frustration in future. As Marsha said, you have plenty of wonderful projects of your own to keep you busy.