I promised to be a better blogger in August, but here it is, the month nearly half over and I've not posted anything...

My guild's retreat was amazing.  I laughed harder and more often than I can remember and I got some sewing done, too.  The "Quilt Fairy" visited and brought me a bunch of goodies (members attending made little goodies and distributed them to sewing stations when we were sleeping or eating or otherwise all out).  I got a mug rug, a nice pair of scissors, a little pouch filled with chocolate and many other wonderful things.  The amount of goodies prompted someone to say that the "Quilt Fairy" should bring a bag to carry it all home...hmm...  I can't wait for next year!  (My name is already on the list.)

I worked on the Mandarin Express quilt at the retreat, but didn't get much done.  There are two blocks making up the quilt and each at its most basic is a 9-patch.  I worked on sewing units that will be squares of the 9-patch, but never got any of them sewn to each other.  I promise photos as soon as I get back to working on it.

When I got home, the house was far cleaner than after my last absence and the kitties weren't in hiding.  But there was a lot to catch up on, having lost a weekend, so I didn't get to sewing done until this weekend...

This project was half-sewn blocks residing on my sewing table, so I decided, considering the disaster I turned my sewing room into while unpacking my projects, I'd start there and sew my way to a clean room!

I sewed and sewed and finally had a top together! 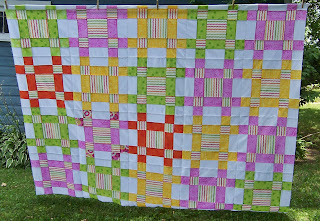 This is supposed to be a twin, but seems rather wide...hmmm...  It will be donated for charity, so hopefully someone will find a use for it.

I also agreed a few months back to quilt two tops for a friend.  Her mom had made quilts for her grandson (friend's little boy) but decided he's too hard on things for them to hold up well being tied only.  She contacted me (the friend) asking about cost and I offered to just quilt them myself.  (Stuck my foot in my mouth...as usual...)  So we finally found time to get together Saturday and I got the tops, back and batting. 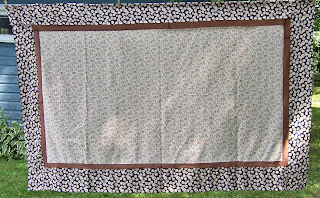 Nothing fancy, but probably a good choice if they're going to be beat up. 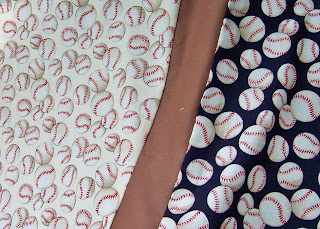 Here you can see the fabric up close - you kinda lose the baseballs in the distance, but it's really cute fabric.  I just quilted an overall meander, figuring something that held the layers together would be more important than anything fancy.  But I'm not going to show you the photo of the first one quilted because, well, it wasn't square and I fought with it to get it to look halfway decent and am still not happy.  Had I realized it was so bad before I started, I might have made an effort to fix it, but I'm fairly sure the gal who made these is not much of a quilter.  Her heart is in the right place, sewing for her grandson, so I'm not going to judge.

Tomorrow my brother and his wife are setting up a booth at the AQS show in Grand Rapids.  Though I'm not sure when ribbons will be placed, the show opens Wednesday and I'm hoping maybe they can sneak a peak and see if our guild challenge quilts got one.  I'll be sure to get photos of all 8 of our quilts hanging when I visit on Saturday, but won't be home to post them until Sunday, as I'm tear-down crew after the show ends Saturday and am staying over Saturday night to take my 3 nieces (from my side of the family) back-to-school shopping for late birthday presents.  We've done this ever year since the one who just turned 15 started 1st grade, so I can't stop now!  (And it's a lot more fun now that they can do a lot of the trying on without my help...of course, they also know how to bargain better too...)

Next up in the line to sew are piecing two backs for quilts.  This weekend I purchased a moveable clothing hanging thing and some hangars and hung up the quilts that are in line to be quilted.  There were 14.  Now there's 13, but holy cow!  I didn't realize there were so many, but I don't think any are larger than a twin, so it could be worse, right?  So in the process of organizing all that, I realized two quilts have backs, but they're not pieced, so they got pushed ahead in the lineup of sewing.  Once they're done, it's back to Mandarin Express...unless I get started making bags...

I promise more photos next time.  I need to remember to take them...I've gotten lazy...

Your new quilt top is so cheerful and colorful; someone will love it for sure! Do you think I should give you a lesson in saying NO? I'm pretty good at it! *wink* You were really nice to quilt for you friend. Sounds like you have a pretty busy schedule ahead; good luck with it. Looking forward to pictures! ---"Love"

It sounds like your quilting retreat was wonderful. Colour me just a wee bit envious :) Nice quilt top, very cheerful. I'm sure someone will love putting it to good use. Enjoy your time at the AQS show!

I like your "sew my way to a clean room". The only way I could get a clean room was to move everything to the dining room table - ;))

The charity quilt is really cute!!! I love those stripes.
Sounds like the retreat was a lot of fun! I have never spent time with quilty friends that didn't have lots of laughter.
Look forward to seeing your othet projects as you get them finished.