On the drive home from Drummond Island yesterday, I fully expected today to be a lazy day, one where I would take a nap and ignore the blog...until I arrived home to find a filthy house, 4 inches of water standing in my bathtub (the only one we have) and ALL the bedding removed and no clue what might still be clean.  Never mind the cat that had been hiding since Monday that we tore the house apart looking for.  (She's fine.  I'd guess she snuck out when no one was home to eat.  Some days she does that for me.)

7 loads of laundry later.  2 trips for clog removal equipment and now awaiting the cousin/plumber.  Dishes, vacuuming, bed-making, and air conditioner reinstallment later, I'm a little wound up, so I thought I'd blog about my wonderful week away!

This is the third year the hubby and I have joined friends on Drummond Island and this was the best fishing year... 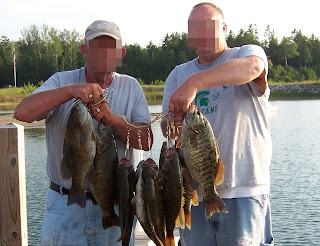 (yeah, faceless, but I don't have permission so this is safest - these were caught in about 3 hours - including the trip out and back! - all smallmouth bass)

Though last year I technically completed three tops, two were baby quilts and were cut out when I left.  This year I left with stacks of fabric and grand plans to work on four quilts. 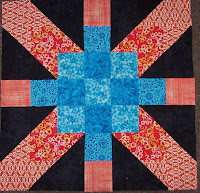 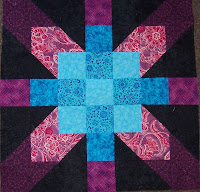 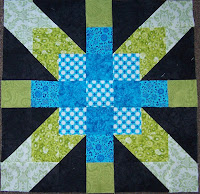 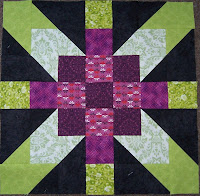 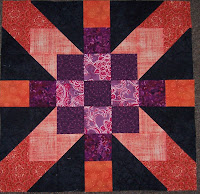 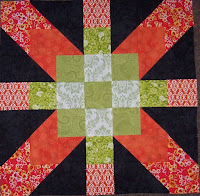 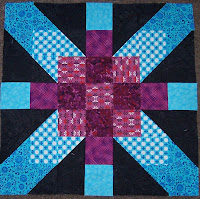 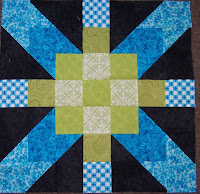 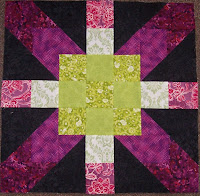 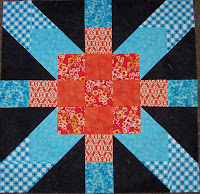 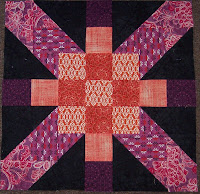 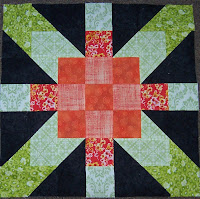 These took about 1.5 hours each.  And since each one is a little different, there's no mass production that can go on.  But every one was fun to see it come together. 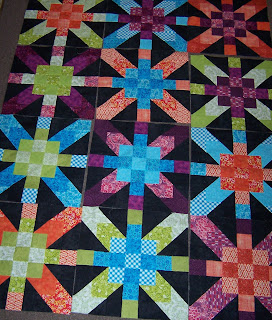 After a little layout fussing and tweaking, I finally decided there was no way I was going to get it "perfect" and it looked pretty good, so the dreaded long seams began.  They weren't as bad as I anticipated and the border was probably the easiest one I've ever put on.  Maybe all the anticipation of awfulness prepared me?  Regardless, here's the top! The hubby said he liked this one because he saw the black.  Then he saw some of the fabrics and declared it the ugliest thing he'd ever seen.  I was kinda surprised it took him that long!

This photo was taken Tuesday mid-morning.  The quilt was started Sunday evening (half-heartedly).  So about 2 days to complete.  It finished about 62x80.  I think.  Good sofa size, right?  (Too bad my sofa is RED!)

After a short break for lunch, I started on the next quilt. 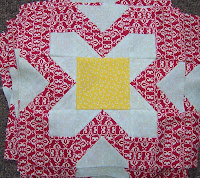 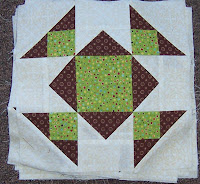 And while mass production was possible here, all those darn flying geese and their points and trimming and whatnot, these took a LOT longer than anticipated.

But bonus: no effort required to figure out which block will look best where!

I thought I'd have this done Thursday.  Maybe early Friday.  Friday about 8pm I finally got this shot...in the windy wind: 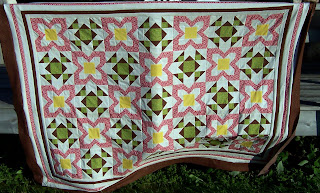 Friday we had crazy storms.  I felt like I was in a carwash for the sideways sheets of rain hitting the windows of our cabin and it was eerie watching the storms roll across the lake at us.  (But my car is significantly cleaner!)  The guys tried to fish a number of times, sometimes only getting as far as the dock (a few hundred yards from the cabin) and other times getting out to a favored spot before the rain drove them back in.  They did catch a few, but I think it took a few hours once they were in for the night to actually dry out!

So only two of the four quilts completed (to tops), but TWO in one week is pretty good.  I calculated the pieces (not including borders) in the second and it's over 1200.  I think the first is probably not far behind that.

This coming weekend is a quilt retreat!  Leaving Friday, returning Monday, and this time the hubby will be home to care for the cats and house.  And while he's not always as tidy as I am (and do not think I'm any sort of neat freak), I'm SURE the house will look much better this time.

The other trip this month was the first weekend of the month when my brother and I went to a family reunion in Iowa.  I think I went to 6 or 7 quilt shops with a varying combination of aunts.  I bought a few books (yay books!) and a kit to make a pincushion using "Iowa Shop Hop" fabric.  Yardage is no longer available (and the hop is long over), but I thought a little pincushion would be a nice souvenir.  I don't have photos of anything yet, but will try to get some to share.  The trip was a lot of fun and I got to hang out with cousins I only see at reunions (we're scattered across the country) and relax at a beautiful house on a beautiful lake in the middle of a cornfield in Iowa.  (If you build it they will come...no, wait...that was a baseball field...but the lake WAS made from a river that ran through a cornfield!)

And with that, I'm off to hang with the hubby.  He just spent a few hours mowing the lawn while I finished cleaning up the house, so I think we'll probably go find something to do to relax together...wonder what's playing at the local theater...?

I think the first quilt is great, and the next set of blocks will be too! What I don't understand is how you can get so much sewing done in such a short time, in addition to everything else you had to do during the same time frame! Sounded like a very busy but fun time! (My son would be jealous of the fish!) ---"Love"

Two complete quilt tops, from start to finish, in a week?!!! Really pretty ones too. And more quilting to come again at retreat? OK, now I'm feeling downright unproductive :) My hat's off to you! So sorry you had to come home to domestic mess though.

Your two quilt tops were not easy ones and I am impressed you got them done so fast. I really like that first one the blocks are so cool or maybe it is your fabric selection. In any case I like it a lot.

Both tops look wonderful! I love both of them and that is a good job getting 2 done i one week. Getting everything put away after a trip is something I am dreading right now. While I am anxious to get home, it will take me about a week to get everything from the camper transferred to the house and put away. Then there's the 2 months of mail to go through. I know I will have some quilting magazines to read - Yea!!

Both quilt tops have real razzle dazzle. Quite an accomplishment given you were on holidays! You can never pick the weather on holidays but the lads hooked a decent haul of fish.