I've been busy preparing "bacteria" for my challenge quilt...lots of gathering going on...

And finally I had enough to start pinning them down in preparation to sew!  (They're not pinned here, but in real life they are!) 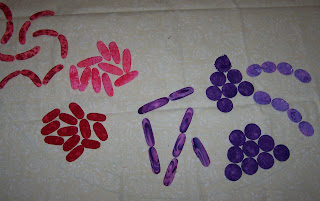 It doesn't look like much when I see it up close and in person, but the photograph gives me a different perspective and I like what I'm seeing.  All the darkest red rods (E. coli) have been sewn down as well as all the mottled purples (Bacillus) and I've started on the purple circles (Staph.).  They take a while, but it's all good.

To put them in perspective of size, I drew around the end of a thread spool for the purple circles.

There will also be some fungi (Pencillium, Aspergillus (bread mold) and a representative of the group that causes athlete's foot and ringworm) as well as some budding yeast and some viruses (HIV, Rhinovirus (common cold) and Influenza).

I hope I can get them all done in time!  The other organism groups will be represented using slightly different methods...some of them still solidifying in my head...

And I've decided to show my progress because, though I doubt any of my quilt group members has found my blog, I doubt even more that one of them is going to steal my idea exactly if they do find it.

In addition to these little guys, I made my two charity blocks this weekend. 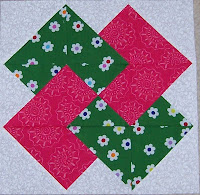 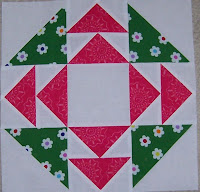 See the green?  That's from my more funky stash.  It was the back of a quilt I made a few years ago and I have a decent chunk of it left.  I decided it would be a good print to use and tie together other bright fabrics.  So far only the pink, but I'm only two blocks in...13 more to go!

I also cut some sashing and borders for the other 15 blocks, but haven't had a chance to sew them together yet.  Though things have slowed down at work, I still come home tired enough at night to just want to relax.  I suppose it being colder in my upstairs sewing room doesn't help...maybe when the weather gets a little warmer I'll have more motivation?

Your imagination and creativity amaze me! Like those blocks too! ---"Love"

I just love the bacteria quilt! It's too clever by half. The bright colours in your charity blocks look good too. The green is a terrific choice as it looks like the flower centres are diffiernt colours.

I think you idea for the challenge quilt is so perfect, and I am sure no one else could 'copy' you.
I do have to say that all those organisms together are kind of a scary microbe stew. Sure wouldn't want them all to visit me at once. ;) LOL
I love pink and green together. And you are on your way to another charity quilt.
Happy stitching.

Partial to the card trick 'cause I really like that block! Wondering how the bacteria are going to turn out. Looks interesting so far. The amount of time you spend sewing is not as important as that you do it. Every little bit gets you a little closer to finish! Keep it up girl!

Hey, love the pink and green together. And the bacteria project totally rocks!

I'm glad you've decided to share your progress on the challenge quilt. I'm intrigued about the final composition. I like the charityblocks, though I too wondered about Quilt-Pro's choice of name for "Capital T".. I just don't see it! Your funky fabric in every block should tie everything together nicely in a cheerful quilt.