charity blocks and a new project

Another week with little quilty news to share, but when I don't have a project I'm needing to work on, that's the way it seems to go.

Yesterday was my quilt group's Saturday sew day and I've remedied my problem of no current project with this: 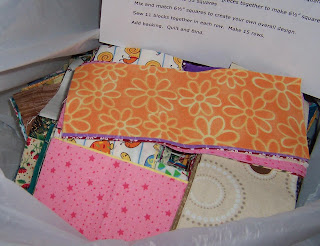 We have a big bin of donated scraps.  Some pieces are larger than others.  And we have a gal who likes to cut these pieces and mix and match and make kits.  Cutting was suspended over the holidays, but yesterday she was at it again.  I brought home this kit to work on.  The fabrics on top are a bit cuter than some that are below, but we work with what we get and they're scrappy, but they'll keep someone warm and that's the whole plan.

So...something to sew on a little every night.

Yesterday at our sewing day I worked on more arcs for my Christmas Pickle quilt.  8 more paper pieced portions of arcs done, so 8 more to go.  Then the scary template part, but I don't expect to be there any time soon!

And I also made two charity blocks this weekend. 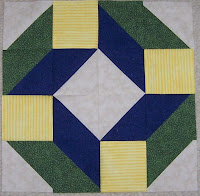 Bachelor's Puzzle
by Quilt-Pro Systems Block of the Day
12" 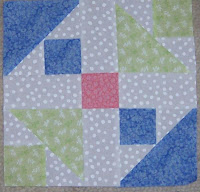 Back and Forth
by Quilt-Pro Systems Block of the Day
10"
(I know it looks like it's put together wrong, but it's not.  If it makes you feel any better, it's bugging me too.)

Someone mentioned in the comments that the Quilt-Pro Block of the Day is keeping me well supplied.  I'm being choosy, but you'd probably be surprised to know that these two were the only two blocks in the last week that I liked enough to make.  Same story for last week's blocks.  But I suppose that's good - otherwise I'd have an overwhelming stack of blocks by the end of just this month!

And just a few days ago A Left Handed Quilter mentioned her method of sewing blocks in sections, not rows.  She's mentioned this method before, but this time encouraged us to try it.  So I thought what the heck and did just that with my Bachelor's Puzzle block.  Though I'm not entirely sold on this method, an interesting thing did happen...

Those units are identical!  They all rotate and come out to be the block you see above.  I promise nothing was ripped or sewn differently after this photo.  So I suppose if I were to make a whole quilt with this block, I could have an easier go than the way I constructed the block today.

And that's all I have to share.  I think I'll go take a nap now.  It's really cold out (and supposed to get colder yet), so a snuggle under a quilt with the fur-babies sounds rather nice right now!

I know what you mean about not keeping every Quil-Pro block. They show up in my mailbox daily but I don't download anywhere near all of them. There are just enough that I like that I haven't unsubscribed from it. I like your colour selections for Bachelor's Puzzle, and I suspect Back and Forth would result in some nice secondary patterns if repeated in a quilt.

Both blocks are pretty, but the Back and Forth appeals to me more, maybe because of the color? That box of scraps looks like a real challenge! ---"Love"

I too have been doing the quilt pro block of the day. I only have up to January 6 done though.

Thanks for the shout-out Katie! And thanks for trying the "chunk" method! Most blocks do break down to identical units that are just rotated one way or the other - the more you look - the more you will see - ;))

What a fantastic lady to cut up all the scraps and make a kit! I guess you are more likely to take on the quilt when all of the cutting has been done. Clever! Interesting approach to your charity block. I'm all for anything that makes sewing easier. Snuggle up and stay warm.

What a fantastic lady to cut up all the scraps and make a kit! I guess you are more likely to take on the quilt when all of the cutting has been done. Clever! Interesting approach to your charity block. I'm all for anything that makes sewing easier. Snuggle up and stay warm.

Your charity blocks are looking good. The variety is great.
I am sure you will make that little bundle of scraps into a great little quilt.
I know that winter has been really mild so far, but darn it sure is cold now. Cuddling with fur babies sounds like a great plan.