a little more sewing this week

While it hasn't been the most productive week for me, I did find some time to sew this Saturday.  In addition to the charity block, of course.

I started working on the kit from my quilt group.  They've named it One, Two, Three Quilt because the blocks are either single pieces, two strips or three strips.  The twos had been sewn by another quilter, but the rest was up to me.

It doesn't look all that messy, but it got worse as the strips got longer!  11x15 blocks (6" finished each) is a lot of sewing...  I might be further along at this point, but I had to pick up and move downstairs, as the hubby was sleeping in the next room.  Usually he says it's okay because he has a fan to drown out the machine noise, but that died a few days ago and just try to find a fan in the middle of winter! 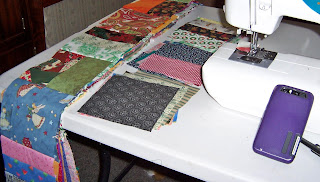 All tidied up, but not quite finished.  I think each row needs three more squares/blocks.  You can see it's pretty random - just whatever was in the donated box, and it's so against my matchy-matchy way of doing things, but I'm doing okay.  Just working hard at not worrying!

And then there's the single blocks to use up my stash. 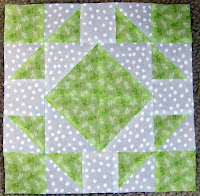 Basket Puzzle
from Quilt-Pro Systems Block of the Day 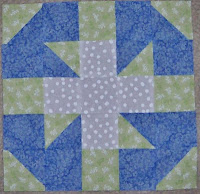 Baton Rouge Square
from Quilt-Pro Systems Block of the Day

That green is giving me fits to photograph...

Again this week, these two were the only blocks of all the daily blocks I liked, so still keeping pace!  Anyone besides me notice they're in alphabetical order?  While most of the time that might appeal to the organized side of me, somehow this time it's bugging me.  It's not random enough...go figure...

On a non-quilty note, my brother has a blog.  He builds model cars and he's really good at it.  But I had to laugh because his latest post he shows his "stash" of kits.  While he's not a quilter, I believe having 3 aunts, a sister, a mom and a wife who are may have influenced his choice of words.  And the number he has, well, it probably is well-described as a stash!

Time to go spend some quality time with the hubby.  We're having a snowstorm this evening and it's a good night to curl up under a quilt and take advantage of Netflix.

Yeah, I checked out your brothers blog. He definitely has a stash, LOL! Keep on sewing, girl. You're doing good!

Both the blocks are very pretty! I'm sure the other project will work out just fine, but you know it would be bothering me too. Just keep on keeping on! It will be okay when you get it together! ---"Love"

Like you, I find it a struggle to be random but stick at it. Cute little blocks for your charity quilt. Stay warm and snuggly.

Katie great blocks. I especially like the complex look of the first one.
Glad you are not getting too anxious over the random fabrics in the charity quilt. I tend toward the matchy matchy myself. ;)
Having an ice storm here too. Should have gotten bread and milk before it started.
Stay safe in the bad weather.

I had to check out your brother's stash of models...too funny!