Tuesday my mom had surgery on her hand.  Nothing major and she's doing well, but I invited her and my dad down today to get her out of the house.  We hit 5 thrift stores and Goodwill.  Who knew in a town this size there were so many places to bargain hunt?

(My dad and hubby went to a sports bar and ate wings and drank beer.  All the better for my mom and I!)

The first one I wasn't sure about.  It was FULL and messy, but then I found a treasure. 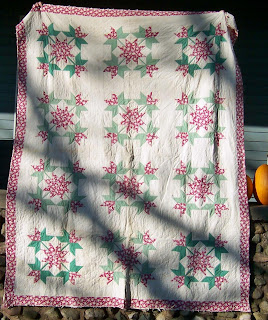 It's about 70x90 and in relatively good condition.
It has stains and was clearly used (one corner is pretty torn up and the binding is pretty much worn out), but not too bad.  It was priced at $25 to be a "cutter quilt" by a quilter I know.

I can't imagine cutting into this.

It's hand-quilted and that green looks a lot like the green that was popular in the 30's.
I believe the quilt itself is machine-pieced. 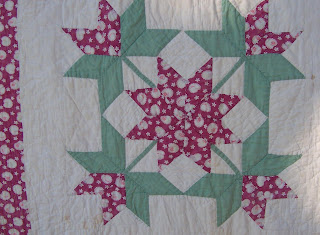 The piecing is very well done, though the hand-quilting isn't those teeny stitches we're all supposed to aspire to.  And the stems have machine-quilting just inside the green.

But it's purple and I love it.
I'm not sure what I'm going to do with it, but I think a label is definitely in order.  At least to say where it was bought, when and by whom.  So if it's found again, at least that much information will be available.

It's too bad that I don't know who made it or why.

My mom also found a bag of pieces cut to make flying geese that form a cross in the block.  No idea what exactly is in there or how well it's cut, but for $1, the worst that happens is that it gets recycled to become paper.

We also found a lot of other treasures from decorations for the next quilt retreat my mom will run to books and puzzles to keep her occupied while she can't sew.  My bargains were limited to a few college team shirts I plan to cut up to make t-shirt quilts for a charity auction.  (More on that as the plans for that solidify.)

But that's not all I've been doing.

Last Saturday was my quilt group's Saturday sew day and I made a few crayon rolls... 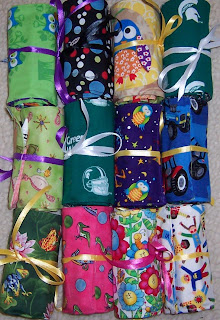 The church where our group meets lets us use the room we meet in free of charge, so when they put on an annual craft bazaar to raise $$ for the church, we all pitch in and donate items to sell.  I hope these will sell well.

I had fun using up my scraps and couldn't stop myself.  I think I could have made another dozen (I finished 7 Saturday and the other 5 Sunday) if I didn't worry I'd saturate the market!

And who would believe that a box of 16 crayons costs 10 cents more than a box of 24?  These take 16, so it was silly to buy the bigger boxes, but I stood there in the store wondering what they were thinking.

Also there's the quilt group Christmas party where we're doing a $10 gift exchange.  It needs to be handmade, but not necessarily handmade by us.  It can't be handmade by someone in China, but from a craft fair is okay.  My project is finished, but I haven't gotten a photo of it finished yet.... 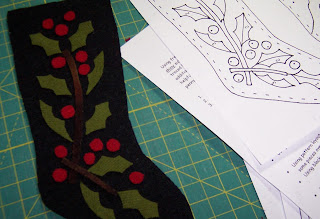 But I think you get the idea.

It's wool and I got all the bits from my mom's stash, so other than the pattern, it didn't actually cost me anything.  I sure hope whoever gets it thinks it's worth $10...

This was my first go at wool applique and I don't mind it, but that's one tiny stocking.  The pattern has a stocking that's probably 20" long, but I decided that was too big.  So there were placement diagrams (three different patterns) on a single sheet of 8x11 paper.  I decided to make it that size, so it's finished about 7" long.  Those little red dots are about as big around as a pencil eraser.  Maybe not the best choice for a first try...

The baby quilt I was going to make will no longer happen.  Sadly my friend lost the baby and I don't think it would help her to have a quilt to remind her what could have been.  Instead I've obviously poured some effort into other projects!

Next up...not sure.  I bought a kit for a Halloween wall-hanging, so maybe I'll work on that.  Since Halloween is all of 4 days away, seems about right!

Or maybe I'll take a nap.  I had fun today, but it was exhausting!

Sounds like you and your Mom had a great shopping day! Those are some great finds. The crayon rolls are so cute, hope the church makes lots of $$ in the sale. You have been busy and you have earned some rest. Enjoy!

Finding deal in thrift shops is so much fun! The quilt is really pretty. The Christmas stocking is cute. I have a bunch of wool waiting for making into projects, so I think I'll look for a Christmas ornament pattern. I need to make one for my guild's Christmas ornament exchange in December. I can handle wool appliqué a lot better than needle turn!

Fun shopping day! I like your crayon rolls. Those are fun, especially if you keep one for yourself and toss in a colouring book...I don't think anyone's ever too old to colour :) I don't think you have to worry about the "value" of your gift for quilt group. It's beautiful and I'm sure will be appreciated. Hope you had a nice nap :) (or maybe you can resist a nap better than me and started something new)

So now, not only do I need a nap (being exhausted from reading your post, LOL) but I've got the thrift store urge! Katie, you amaze me by how much you accomplish in such a short time. Hope your mom is feeling better each day!

What a beautiful quilt! Do you know the name of the pattern? The holly stocking is going to be lovely too! Who wouldn't love a crayon roll like those! You have really been busy! Glad you had a good day with your mom. ---"Love"

Great find at the resale shop. I couldn't cut it up either.
Sorry about your friend's loss.

Hope your Mom has a speedy recovery. Sounds like you two had fun at the resale shops.
Happy Stitching