Let's see if I can do this before the internet goes out again or the computer comes to a dead halt...at least I got the photos transferred...after 4 tries...

Today I gave away Hailey's quilt.  Finished with about an hour to spare...

It all started with a pattern called "Serendipity" in the August 2002 issue of American Patchwork and quilting.  Perfect size, pretty colors...

A trip for fabric and I was excited to start.

Of course there was some procrastinating and other-quilt-finishing first...

And then I started making blocks...with 49 pieces each.  What was I thinking?  Yeah, I should have counted first, but it was so PRETTY! 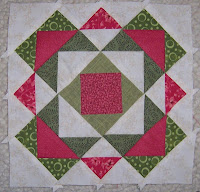 11 more blocks to go.
A couple of applique panels, too.

And then some measuring.

Refigure the sashing between blocks.  Okay, now they're about 3/4" finished.  Sew straight!

Now for the green borders.
Oh wait, the quilt is going to be too big with those borders.
I think.
Refigure.
Recut.
Sew, sew, sew.
(You know I dislike borders.)

If I hadn't cut down the stupid green borders, it would have fit.

And I have no more green so I can't make new ones.

Okay, calm down.
You've been quilting 16 or so years.
You can figure this out.

Do a second border in red.
But I don't want a second border, never mind what color.
But you don't have a choice.
Okay, okay, cut the darn border that will finish something like 1/2".
Sew slowly.
Because that skinny you have to be right.

Sew on the pieced border and sigh with relief.

Take it to show off at your quilt group on Thursday.

Friday evening, decide to take the night off from the quilt and finish it Saturday.
Get up Saturday and realize you still have to sew on two more flowers (they overlapped into the border that wasn't on earlier) and the back isn't washed.  Or pieced.

But you know how you're going to quilt it.
At least you have that.

And then the hubby says "Oh, hey, we're babysitting my brother's kids Saturday."
Yay.
An 8-year-old who thinks she has to be literally touching me every second she's here.
This should be fun.

But first I have to go to the store and buy food to cook to feed the kids.
Because they won't eat my leftover spicy sausage and rice casserole.
(Neither will the hubby, for that matter.)

But they don't want my lunch.
They want Chinese.
From a restaurant 30 minutes away.
And they won't bring me food.
I have to go along.

So I go.
And then we have to stop at the store to buy fake blood so my hubby and nephew can pretend that my niece has killed them.
And some diapers for the baby shower.
(That fake blood looks pretty real, though.)
(At least when it's all over my kitchen floor.)

Finally home and load the quilt.
Well, first mark the quilt.
With a soapstone marker because apparently no one sells chalk markers any more.
Then the stupid bobbin is giving me fits so my tension is AWFUL.
Fix, fix, fix.
Is it done yet?
No.

Sew, sew, sew.
Break for dinner.
(We ordered pizza instead of roasting chicken.  The kids were okay with that, thankfully.)
Sew, sew, sew.

Trim.
Binding is made.
I'm putting up my feet.
5 hours of longarming.
Yeah.

Get up this morning, sew on binding.
Fire up Netflix and hand-sew the other half of binding.
(After fixing the internet for about the 10th time.)
Sew down a label.
Shower.
Eat lunch.
Leave for shower.

Anyways, you've been patient with me, so here's the photos! 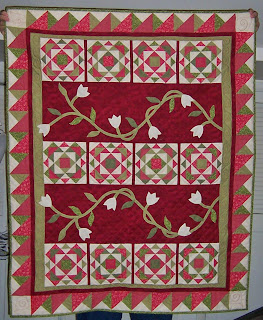 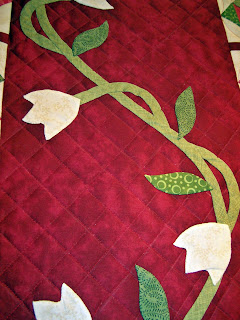 I should have taken more photos of the quilting, but if you click on the whole quilt, you can zoom in.  I think.

I didn't measure the final product, but the magazine says it should be 52 x42 and it's probably close.  Assuming they didn't mess that up, too.

So you can see why this took forever.
But it was so worth it.
I love how it came out.
(Except for that one line where I marked it 1.25" instead of 1"...but it was too late and you don't really see it now.)

The shower was nice.  She got lots of cute stuff.
Her mom is a quilter, but she got three hunks of uncut fabric for that quilt, so I guess I win.
Not that it was a competition.  :)

And now it's time to go baste my roasting chicken and start the mashed potatoes.
I think the hubby earned them, since he really did a good job with the kids yesterday.
He even made witch hat cookies with them.
Because I was STILL quilting.

Next up?
Another baby quilt.
Here's to hoping that one goes better.
But I do have a bit more confidence with my longarming skills, so there's a silver lining here!

Happy quilting
(and pardon the snark)
Katie
Posted by Katie at 7:00 PM

Oh dear! I think you should keep some chocolate on hand to help deal with these quilting challenges :) Maybe you should have counted the pieces first, but I'm glad you didn't because the quilt turned out so pretty! If you hadn't told us why there's a thin red border I wouldn't have guessed that was a last minute fix. The quilting I could see when I zoomed looked really good. Love the swirls! I hope the next baby quilt goes smoothly...

Yay for pizza! It really is a pretty quilt. She's lucky. :) And yep, I think you win!

I love your posts. You do such gorgeous work, but not without a bit of frustration. I only have 4 quilts completed so I'm still fairly new. It's nice to know that even the experienced quilters have moments of AHHHHHHHHHH!

Wow...what a finish. You get a gold star for your amazing perseverance on this one! The quilt came out beautiful. Those cookies look pretty good too.

The colors and fabrics, the piecing, the quilting, and the applique: ALL beautiful! What a treasure it will be! Sorry you had such a time with it. With that one out of the way now, next week will be better, right? ---"Love"

The quilt looks wonderful! It sure wasn't an easy one - each part looks hard - complicated blocks, applique (the A word), pieced border! I don't know if I have ever done a pieced border, but I'm thinking about it. I hate it when my blocks don't come out the right size - but mine are usually too small. I don't know which it worse. You can cut big ones down, but then the points might be covered by the seam. You make every post into an adventure - fun to read! I hope the next baby quilt isn't as complicated - for your sake!

At some point during that commentary, I'd have said "the hell with it for now" and gone out and bought something. It's amazing how good it looks 'cause I know I would have screwed it up royally if I had persisted, LOL! Well done, it's a beautiful quilt!

I hope she loved it because it is amazing. It does look like a difficult quilt to make. Love the combination of the pieced blocks and the applique. Great job!
I am sure the baby quilt will go quickly for you.
(almost forgot, the quilting looks professional...you really are good on the longarm)

a very nice made.. http://car-donation-california-vehicle.blogspot.com