..flying time...that makes it sound like I'm in control somehow...ha!

I come home most nights exhausted.  When we lost a coworker to be a stay-at-home mom, things were okay.  For about a week.  Then big boxes of samples started arriving and we started offering a cow pregnancy test using milk and a big research project came in a month early...yikes!  The days go by fast, but being exhausted every night doesn't make for good progress on anything fun...but I have been working on projects...slowly...

First there are a few charity quilts in the works.  The first was cut by a quilt group member, using donated fabrics, then sewn by another and finally longarmed by me.  There's a big tub and two gals are fantastic at matching things up and figuring out easy patterns.  I made the Motel 6 quilt from that bin of fabrics (the name stuck!), but this one is prettier. 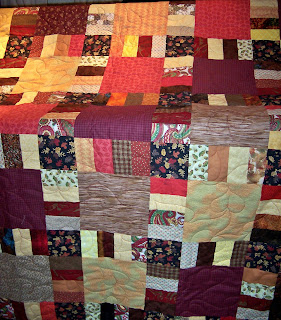 I can't get the whole thing in the photo tonight, but you get the idea.  It's about twin-sized and will be donated the the local domestic abuse shelter.

I think this photo shows the quilting a little better - all free-hand design, so some of those leaves are a little wonkier than others.  :) 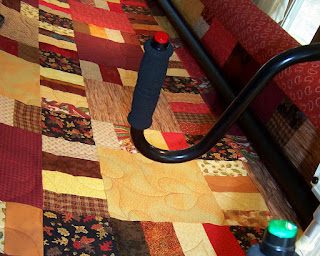 And that green button?  That's my "jet pack" as the nephew called it.  Apparently my longarm has some sort of superhero look to it...

The second is also this month's UFO.  I bought the kit a while back and never knew what to do with it, so I decided a baby quilt for the local shelter would be nice, as I hear they always have a need for this particular size. 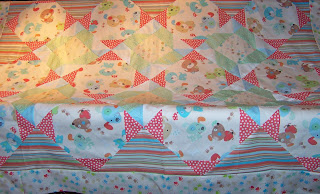 I wish I could say this is also quilted, but it's not.  I sewed the top last Saturday at my quilt groups Saturday sew day and put the borders on today, then realized the directions for a pieced back would not make a back big enough for my quilt.  For whatever reason, it's about 4" bigger than the pattern says it should be.  So I had to order a bit more fabric for the back - no complaints - I can procrastinate with the best of them - but the fabric is on the way thanks to my brother's eBay account.  (Not to worry - he'll get paid back!)

The pattern is called "Adorable Puppies" by Heather Broehm of Heather & Hollyhocks Quilting and MY quilt finished about 47x60.  I'll be sharing more when it's finished.

So in addition to marathon-Saturday-sewing, I've been baking... 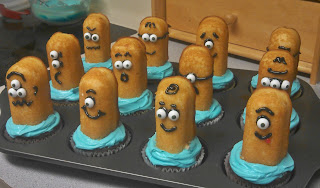 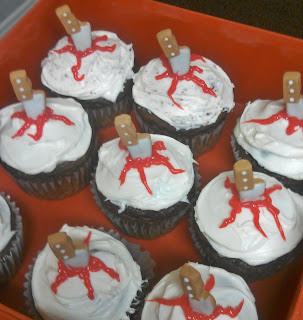 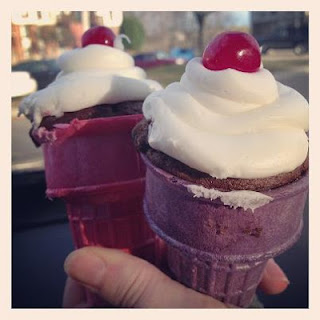 Minion cupcakes for a fund-raiser/compeition at the hubby's work.
(won, hands down)
Halloween cupcakes for fun at work.
(how do I REALLY feel about work?)
Ice cream cupcakes for coworkers birthdays
(photo lifted from one facebook...)

And these might be worth a few $$ considering recent news: 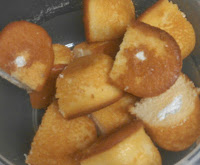 There's also been some bread-baking today: 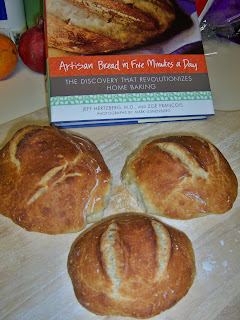 These will be bread bowls for the chili that's simmering as I type.  Yummy!

There was a fudge truffle cheesecake taken to my quilt group this past Thursday.  And a new recipe of lemon dill chicken (thanks Pinterest) earlier this week as well.  (There was also dinner at McDonalds far too often...)

And finally, a while ago I showed you these blocks: 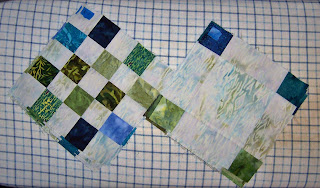 but I don't think I showed you the final quilt to prove that I didn't sew anything together wrong. 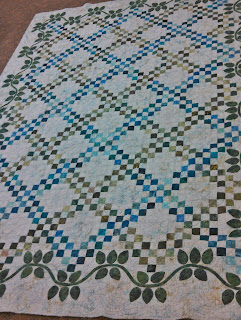 It's hanging in the local library and raffle tickets are being sold.  It will be raffled next October, so it's got a long ways to go hanging there, but we hope it will bring in a lot of $$ to help keep our library running.

In addition, my brother-in-law was involved in a terrible car accident two weeks ago and we spent a lot of time that weekend in the hospital with him and family.  He's home and doing well and we are all so thankful.  Though it took away a weekend, I'd be there again in a heartbeat.

And with that, I believe you've been updated well enough regarding the goings-on around here and I think my chili is properly simmered, so I'm going to go dig a well into those beautiful bread bowls, holler at the hubby that dinner is ready and dig in!

Those minion cupcakes are amazing! lol Love them. And the quilt is gorgeous. Love the quilting motifs in it.

So many fun things to see on your post today!

The donation quilt will be perfect and I love wonky leaves! You have been busy as usual. The raffle quilt is gorgeous and I love the background fabric. It should bring in lots of bucks. The chili in bread bowls sounds scrumptious!

Love those cupcake creations!! Awesome stuff;) And the green and blue quilt is really pretty;) I always enjoyed doing charity quilt work. Glad your brother in law is recovering...this time last year I almost lost my brother in a motorcycle accident.
Happy Quilting!!

You've shown some really creative things, both in quilts and goodies! You have been really busy lately, but looks like you're having fun, and making lots of people happy! ---"Love"

Sorry to hear about your brother-in -law's accident - I wish him a speedy recovery! LOVE your "minion butts" - too funny! - ;))

Love the quilts but my mouth is watering from the baking. Mmmm, I can smell the cupcakes from here. Very creative! Have you slept yet?

Your cupcakes look yummy, but I am a bread girl so that bread made me drool a bit.
The charity quilts are great. Love that baby quilt, the colors look so cute. But the raffle quilt is just amazing. The colors are beautiful and I love the applique on the borders.
Hope your chili was good.