Beware any projects that start this way.
Believe me, I've been there.
It's not always pretty.
Never tidy.

It all started innocently enough seeing this on Pinterest.
(Pinterest is a D-A-N-G-E-R-O-U-S place, never mind all the copyright garbage.)

Oh won't these be cute to make and stuff for the nieces and nephews for Easter?
I've made pinatas before, so this shouldn't be too hard, right?

Rule #1 - read the directions if someone provides a tutorial.
(read: if you use little bits of tissue paper it's harder and you'll end up gluing yourself to your project - the tutorial actually said something along those lines...)

(this is so my favorite photo) 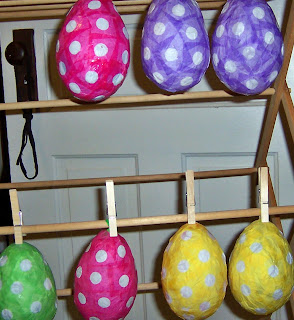 (best use of a clothes drying rack ever)

I only majorly stuck to the last couple.
By then, I think my hands were mostly mod-podge anyways.

Let them dry a few days.
Just to be sure they're really dry.

Then stuff!
This is the "fun" part. 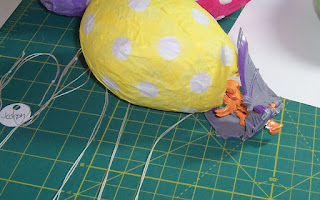 (anybody wondering if this transformer-guy made it?)

Rule #2 - read ALL the directions in the tutorial
Like where it says not to buy stuff that's bigger than so many inches.
I don't care how awesome something looks at the dollar store.  Once it's out of its package, it still has to go through that opening! 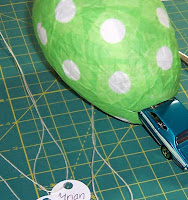 Add some candy.
The girls got girly stuff, just in case you were worrying.

Say a small prayer that they last until Easter.

Clean up.
Move on to the next project...

Oh, I nearly forgot...
Rule #3 - count your nieces and nephews carefully.  Make sure if your sister-in-law just had one, say, 5 months ago that you count him when making the eggs.  So that you don't have to give him a little gift bag instead.

But, referencing Rule #2, it didn't matter.  Other than the pacifiers, nothing would have fit.  So it's all good and he won't know the difference.

In all, a fun project, but please don't sign me up for these next Easter.
(Not to worry, I'll surely find something even more complicated by then.)
(And decide I must make them.)
(Probably with less time to spare.)

PS  Just in case you were worried I wasn't doing enough today, I'm making Spicy Honey-Roasted Chicken for dinner right now, too.  It's a new recipe, so I'll try to remember to tell you how it is.

PPS For those of you thinking I'm some sort of robot with no need for sleep: I slept 8 hours last night, after my marathon sewing day and posting near midnight about it.  What I haven't done today: watch television.  (I dare you to turn off your television for a week.  Get up off the couch when you'd normally be sitting there watching something and go sew.  Or bake.  Or glue yourself to balloons with tissue paper and homemade mod-podge.  Or read.  Turn up the radio and sing along if it's too quiet.  Just do it.  You've probably got a DVR, right?  So just record the stuff you really don't want to miss and see how it goes.  Funny thing for me about not watching much television: the shows I gave up, I don't miss.)
Posted by Katie at 4:55 PM

How fun...love those eggs and the kids get something other than candy.

That looks like a fun, although messy, project and the "eggs" turned out so cute! The kids will love them. To make it more fun, next time you could have all the kids help, can you imagine the results, lol! I like the fabrics you show, what are you going to make? I try not to watch too much TV, there are only a few evening shows I am interested in. I like to do hand stitching in front of the TV. I need to stop playing on the computer so much and sew more!

Adorable eggs. I have been finding lots of cool stuff on Pinterest too. In fact I was just showing my boards to my DD today and pointed out the home made Mod Podge. I mussed the eggs tho.... and I have no little ones close by to make them for.
I am however tempted to make some Peeps crafts. :)
I am going to turn the TV off. I bet I can get lots done.

Enjoyed your post and love the eggs....this is such a cute thing to do.

Those eggs look like a lot of (messy) fun. And the page you linked to linked to instructions for a rainbow cake just in time for kiddie birthdays soming up... I don't need pinterest, I just wait for you to post great links :) AS for the TV - it's not on much here, but I'm sure staying off the computer would free up a chunk of my time!

I'm sure I could qet more quilting done if I turned off the TV and the computer! May have to try that and just listen to the birds! I think I'll pass on those crafty things and also Pinterest. The one time I looked around there, I couldn't stop! I certainly don't have time for that, but there's lots of pretty stuff there! ---"Love"

Looks like fun! My kids and I made a pinata-once-LOL! I stay away from Pinterest, got enough ideas of my own without driving myself crazy with more! You got great results!

You're funny;) Glad you had fun with the egg thingy's...they are way too cute;)
We don't watch TV here at all. Maybe a movie once in a while on Netflix, but that's it. Now, we play video games from time to time when we get the urge.
Anyway, love all the creation going on;)
Happy Quilting!!

The paper eggs are wonderful!! A definite labor of love :o)
Have a great day.
Always, Queenie

Oh Katie! Visions of you and glue. Reminds me of a similar experience involving glitter - I'm still in therapy over that one. I'm too busy napping to watch telly. ann :-)