With just about an hour to spare, my UFO for March is completed.  Well, a top at least, and that's good enough for me.

I procrastinated quite well this month.  I started here: 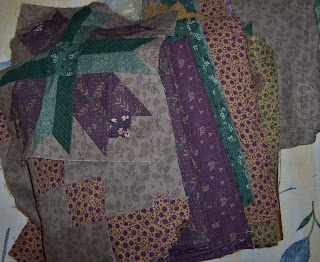 a rescued quilt "kit" with no pattern.

I had found the pattern shortly after purchasing the kit in "At Home with Thimbleberries" and it's called Lily Field.  That made things infintely easier than drafting from a block that was in with the fabrics.

Early this month I sorted through the fabrics in the pile and figured out where everything went.  I had quite a few extra pieces and one green was missing, but I figured out how to make it all work.  My blocks aren't quite the same, but since only one lily and a few alternate blocks were made, I wasn't too worried about the differences.

I plan to put the blocks the previous maker has done on the back. 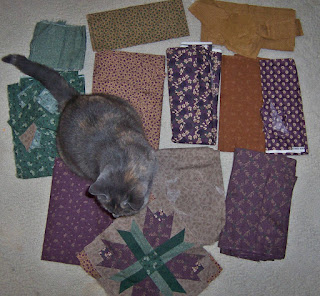 I think all those changes messed with my quilty mojo because I wasn't feeling this project this month.  But I pushed myself.  Not very hard...

Last week I was excited when block units started coming together:

But that was just this past week.  And I can't say the quilt was nearly done when I sat down to sew this morning.  This is where I was: 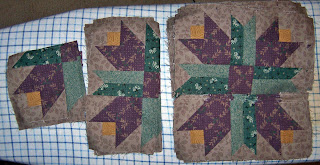 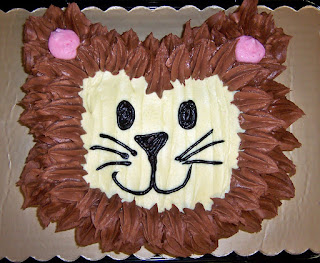 (no, I didn't make it - it's 12 cupcakes iced with about 15 pounds if icing)
because last weekend when we went out to dinner for the hubby's birthday, my 3-year-old nephew was so disappointed we didn't bring any cake for him, we had to remedy that.  And it's so cute I had to share.

And then I sewed and sewed and sewed.
And then dragged the hubby off the couch (he's reading "The Hunger Games" - he read 100 pages, then decided he had to see the movie, so went alone tonight (with my blessing) and now he's back to the book...) to hold up the quilt for me. 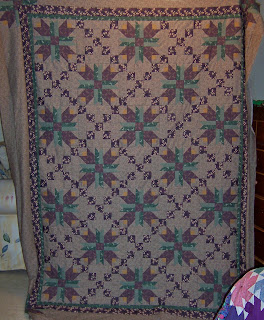 I plan to cut binding before I put everything away, but I think I'm going to get some much-deserved sleep!  And some kitty snuggle time.  All but Emma were very patient and Emma is easily distracted, so she's not too much trouble.  She likes to lick the kitty that comes to visit in the window at night...she can't figure out why that kitty is always there...I've tried to explain it's her reflection...now I just tell her to calm down, that kitty will go away in the morning.

I did do some other crafty stuff this week, but I'll save that for a post in a day or two.

Very impressed, Katie! The Thimbleberries colors are so soft and friendly looking and this is a definite charmer of a quilt top. Congratulations! Now go to bed :)

after your hard day of sewing...that turned out quite beautifully. great job

WOW, you are really a driven sewer when you put your mind to it!! I love your finished top. And that kitty cake is just adorable.

Looks awesome! Good for you!

Really nice Katie! I love the way that floral fabric "shimmers" in the alternate chain blocks!

Looks great! Sounds like you had a sewing marathon today, buit the results seem woryth it.

Very nice! It's going to be a beautiful quilt! That cake is so cute! You deserve a nice rest, so take advantage of it! ---"Love"

A wonderful quilt, I can't believe how much progress you made in a day. Hope you got a good nights sleep.

This is truly a treasure and thank you for sharing. Beautiful work. Judy C

Lucky fabric bits to be rescued by such a dedicated quilter. You did a great job putting this quilt together. You must have gotten up at O'Dark thirty to get all that done.
Love the cake. I bet the nephew loved it too.
Everyone is talking about the hunger games since the movie came out.

Well done, it turned out great! Love the chaining!

Nice finish;) That's funny about the visiting kitty;) They are a hoot;)
Happy Quilting!!