february UFO: quilt from another century

It seems wierd to think of 1999 as another century, but that's when this project was started. 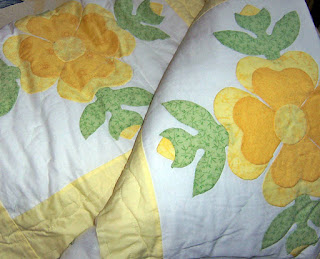 This is most definitely my oldest UFO!

This project started when I moved into an apartment all by myself a few years after college.  I bought some pretty yellow furniture (still have it, so I'll have to remember to get a photo of that too) and had an empty wall.  I thought I'd try my hand at hand applique and this project was born.

The applique is lumpy (I was using freezer paper - this was before I learned needle turn), but it's done.  Then I sandwiched and basted it and marked it for quilting.  And I quilted some of it and then got tired of it and set it aside.  Life happened (I got engaged, married, moved twice, etc, etc, etc) and it got more or less forgotten.

While all this was going on, the blue lines marked with water-erasable marker disappeared.  At one point I did try to resurrect this and re-draw the lines, but nothing was lining up with the template and I gave up pretty quickly.  Shoved it back in the bottom of a closet and forgot about it again.

And then I was digging around for UFOs for the 2012 challenge and found it again.  And groaned.  It needed to go on the list, but I can honestly say I tried REALLY hard to find something else unfinished to replace it with!

I hear a black light will re-illuminate the blue lines so they can be re-drawn and the hubby is able to borrow a portable light from work, so that's part of what I'll be doing this weekend.  Though I sighed pretty loud and hard when #1 was drawn, I am glad to be getting this one out of the way while the weather is colder because who wants to sit under a quilt when it's 90+ outside?

I've considered ripping out the hand-quilting and putting it on the longarm, but I think I'll see this through the way I originally intended.  I doubt I'll be a hand-quilting convert by the time this is done, but when I started this I never imagined I'd enjoy hand applique and those of you who have followed my blog for a while know I seem to take on one applique project after another without complaint.

In other quilty news, I've finally caught up on the Rolling Along quilt along.  The step for Saturday was a small one followed by two bigger ones on Monday and Wednesday, so it was a bit of a struggle, but I'm proud to show off my 18 blocks!  There will be 17 (I think) alternate blocks, but I have until Saturday to relax on this project. 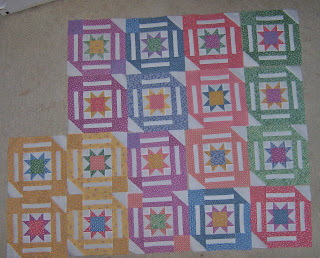 As you can see, as the blocks get bigger, they get scrappier.  I didn't have very large pieces of any fabric, so I'm making do.  I just hope I have enough to finish the alternate blocks, but if not, my mom still has quite a few fabrics in her stash but it will require a trip to pick them out.

I kinda wish I'd made the whole star one print becuase I feel like the borders are fighting with the star for focus, but it's too late now!

What will I work on until I get the black light and the next step for the quilt along? 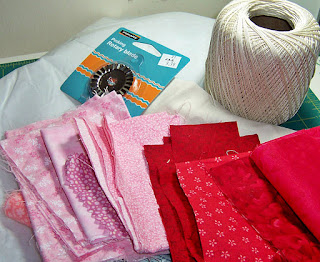 My niece and nephew are coming to spend Friday night with us again, so this is the start of a project for me and my niece.  Anyone want to guess what this will be?  I'll show photos when we're done, but until then this is all you get!

And I'll also be looking for my hand-quilting thread.  Where oh where did I put that?  (More likely someone furry stole it and batted it well under something else and I'll never find it...)

I like your Rolling Along quilt exactly the way it is. The stars aren't fighting with anything else at all.

Your quilt from last century will be beautiful when it is all done. I love the pretty colors. I also love all of the prints in the stars, I like the scrappiness of it and don't think they fight each other too much. It looks great to me! You have a fun project planned with your niece, it will be something for Valentines day I bet!

How fun that you identify it as from another century. I've got at least two UFO's that meet that criteria easily - I guess I'll be time traveling when their turns come up on the WIP attention list!!

1. Love the yellows in your quilt from the last century. (Then I have to add that - contrary to popular belief - the year 2000 also belongs to that century. ;))

I wouldn't rip out your hand quilting - I would just mark what I could and finish it on the longarm. There is no rule that you can't combine both hand quilting and machine quilting in the same quilt - or is there?? ;))

3. I'm guessing raw-edge applique hearts with pinked edges - for Valentines' Day - but I have no idea what the crochet thread is for. Hmmm - ??? Can't wait to see what you make. Bet it's cute!!

Yellow really is not usually one of my favorite colors, but your yellow quilt is quite lovely, and your applique is great! Get that one finished this go-around! Your Rolling Along quilt is going to be great too! Love the colors! Just accept it as though it is exactly as you planned it and tell everyone that; it looks like a good plan to me! ---"Love"

Rolling Along seems fine to me. I quite like the mixed up stars. Good on you for resurrecting such an old project. Perhaps finishing it will breath new life into it. Something Valentine-y? ann :-)

Love the applique quilt! No one is going to notice your little quirks either. All they will see is a pretty quilt. Your blocks are wonderful and I love the scrappy look. Once you get the alternates ready, that quilt will be a real treat!

I love the way the stars look. I think the two tones in the star is more eye catching than distracting, but I'm only seeing pictures. I think it's looking great!

I wasn't thrilled with #1 being the UFO picked this month either. Mine is also a hand applique project. Good luck redrawing the lines this weekend!

I found a UFO from 2001, so I am not far behind you on the "oldest" UFO thing;) Good luck on getting it done this time;)
Love the stars...and the "make do" thing would be appropriate for the 1930's fabrics you are using;)
The secret project? Valentine's related, possibly a banner like those triangle ones to hang across a window?
Have tons of fun;)
Happy Quilting!!

Your yellow applique is going to be beautiful. And done!!!
I love your scrappy stars and I think your colors are just right. Perfect for a scrappy quilt and perfect for trhe era those fabrics came from.
I do not know what you have in store for you and your niece.