I've been stitching along on Rolling Along this weekend.  Saturday's step was to make the 17 alternate blocks.  Judy said she was going to step up the pace from the focus blocks, and boy did she!

I cut and cut (lots of pieces since I can't strip piece!) and then ran out of fabric, so I made a trip to visit my mom and raid her stash a bit more.  Good thing I decided to go scrappy on this!  Wash, dry, press...continue cutting and finally sew!

Just a few minutes ago, I finished all 17! 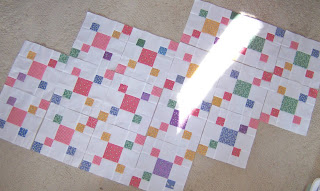 And look at that sun!  My sewing room faces south, so when it's sunny outside there's always sunny spots on the floor.  Sometimes it's blinding me at my sewing machine, sometimes it's making nice patterns on the floor...no complaints for sunshine in January here!

There's a lot of pink.  The fabrics from my first raid had bigger chunks of pink and therefore more pieces in these alternate blocks, but once they're dispersed into the quilt, I think it will be okay.

I look forward to putting these all together.  Tomorrow will be step 7 and I expect that's what we'll be doing.

All this WITH an overnight for a niece and nephew.  They went home quite early on Saturday, but that's when their parents arrived, so I'm not going to argue.

First, Adrian and I made Valentine's Party Mix.  This proved to be a good snack for movie time a few hours later. 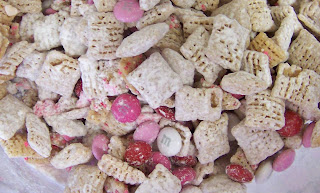 Though you can't see it, there are quite a few Valentine sprinkles in there.  She had a blast, once she finally realized I was serious, just dumping the WHOLE container of sprinkles in there.  (I had a few smaller containers that were half-used and figured why not!)  She also decorated the tub this was stored in using Valentine stickers - another project where I let her have all I had and she could use them all without getting in trouble.

And then on to the project I teased you with a photo of supplies.  It's not the best photo, but it came out bigger than I anticipated (me and math are not such good friends) and I had to take it outside because my house isn't big enough to string it all out AND get far enough away to get it all in the picture.  It's okay it's this big, just hard to photograph.

Kathleen guessed it (more or less) - triangular pennants with "be my valentine" spelled out, one letter to a triangle.  Two hearts on either end for fun.  I had a bit of trouble with the Wonder Under paper not wanting to let go, but we got it done.  She was very proud of it and so excited to give it to her mom.  Mom liked it, too.

Once this was done, she requested to make homemade Valentine cards, so I dug out construction paper, crayons, markers, a glue stick and some paper scissors and let her go.  She had a blast and wasn't even aware of how well supervised she was with those scissors!  The hubby got one of those cards, so it's on our fridge.

And the bag she packed containing a personal DVD player and movies, non-working laptop (?) and 3 Shel Silverstein books was left largely untouched.  (I wondered if she was preparing for Armageddon instead of an overnight at my house?!)

Now it's time for kitty snuggles and maybe a nap.  I'm not feeling well AGAIN - what is it with this winter?  I've been sick more than healthy which is really not normal for me.  But it sure does make me appreciate the times when I am healthy.

Reads lika a good time was had by all! Your blocks are so fresh and springy looking; going to make a very pretty quilt! (Remember: I love pink!) Hopy you get to feeling better within the hour! ---"Love"

Katie, the alternate blocks are so cute. More happy colors. That quilt is going to be so pretty.
Looks like you had a great time with your niece. The yummy Valentine snack mix. The cute pennants.
Sorry that you don't feel well. Rest and recover.

Craft time with your aunt - hard to beat. Sounds like the kids had a fun time. Those blocks are whizzing along. Hope you feel better soon. ann :-)

What a busy weekend! Your niece and nephew will remember these in years to come and how much fun they had! Love the new blocks, they could be a quilt all by themselves!