The days seem to be flying by.  I didn't even realize yesterday I should have shown you my book stack!  Not much progress, but I've been quilting, the book I'm reading is a difficult read and my hubby bought me a Stephen King book of short stories that are way more interesting.  But here it is anyways:

The blue sticky note still shows how tall it started.  But it's going to get worse...there's another book sale here in town this weekend...
On the quilty front, as I was sorting through my fabrics, looking to complete scrapbook pages with swatches, I realized I have A LOT more fabric than I realized.  I see it sitting there, I dig through it every so often, but until I REALLY dug through it, I don't think I realized how much it was.  And pieces that were focal prints or backs of quilts were stored separately from the plainer stuff that I usually dig through first when deciding on a new project which I didn't really consider that often.
Since my cash flow for new fabrics is limited and my time isn't, I decided to keep on digging and pair things up and see what I could come up with for more Quilts for Kids.  I found fabrics that coordinated well enough and I had enough for 4 more quilts!
I washed those that hadn't been, ironed and carefully refolded (I think the refolding is my absolutely least favorite part of quilting!) them all and then started cutting!  Whee with the rotary cutter...by the end I had to keep reminding myself (almost aloud) to keep my focus so I didn't lose a finger! 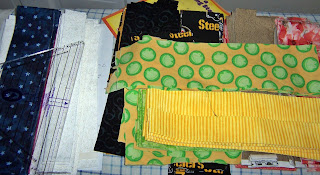 What a mess on my ironing board, but it's all ready to sew.  (And I still have all my fingers.)  The hubby usually works third shift, but on Monday nights he goes in later to stay later Tuesday morning for a meeting.  So Tuesday mornings are manic sewing mornings (I shower after he gets home even!)...
I thought I'd document my process...
After 1 hour:

Doesn't look like much yet, but I did stop to press the red/white/blue combo.  9 strips takes a bit of time.  :)
After about 1.5 hours: 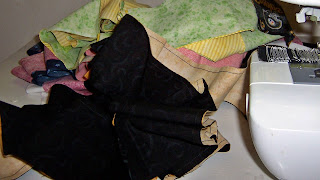 Oh, now it's starting to look like something MESSY!  All the strips are sewn together and ready to be pressed and cut.
After about 2 hours:

Slice, slice, slice with the rotary cutter!  And look, some sunbeams lighting up my ironing board!  This is about the point the hubby got home so I only had about 30 minutes left while he showered...
About 2.5 hours after starting, I stopped here:

The next steps for all involve more sewing, so I was forced to stop here, but how's that for just a few hours?  There's a lot to be said for planning ahead so when your sewing time comes around you can go-go-go!
I know some of you are going to accuse me of maniacal sewing speeds (which I do not do - see I STILL have all 10 fingers!) or not sleeping (which I do plenty of) or having some other super power to accomplish this much, but I'd be willing to bet most of you, given the level of preparation I had put in prior to sewing, would be able to accomplish just as much in that time.  I was just sewing straight lines!  The next steps will be more time-consuming, but I'm excited to start them!
The set on the far right (red/white/blue) is a pattern called Eli's Wheels and can be found at the Moda Bake Shop.  It caught my eye and I knew I had enough red, blue and green to make it and decided patriotic would be nice for a teen boy...or girl...or non-teen kid!
The other three are the basic Quilts for Kids pattern, which can be found on their website, called simply Four Patch.  It's the same pattern I used for the other three and goes together quick and easily.  The Steelers quilt will be one row longer - hoping for another teen boy quilt, though this one may have to make its way to Pennsylvania first!
And last but not least, I had another interview today!  A different company from the one two weeks ago, which is encouraging.  I like what I heard, saw and was told today, so that's got me excited - I hope to hear by the end of this week on both jobs!
I hope you all are having a great week.  It's been absolutely beautiful here.  Gorgeous fall weather - chilly nights, but low 70s during the days - windows open, sweatshirts off!  I'm enjoying it as much as I can because I know the snow is coming!  (I wonder if it's too windy to sew outside...?)
Happy quilting!
Katie
Posted by Katie at 3:29 PM

Being organized really pays off! I like all of your pieces.
Good look on the jobs...hope that you get one you really want.
Your book pile is getting smaller. Can't wait to see how much it grows when you go to the next book sale.
Happy Stitching.,

You are a piecing machine!!! And a walking library!!! And soon will be a great employee for someone! Sounds like maybe things are going your way now! ---"Love"

I am having fun watching all your progress;) And yes, preperation always makes sewing time much more productive;) Got my fingers crossed for your job prospects;)
Happy Quilting!!

Organization, only way to get things done! You go girl!

I am always impressed with how much you do, but not jelouse. I have the girls that take up a lot of my time (and living with my parents has cut down on my creative juices flow for the time being) but I know someday when they are older and I have space, time, and a bit more of a budget, I will be flowing like you. I just wish I could crash at your place and sew with you for a weekend =)