wedding quilt for ryan and jess

I've been teasing you with sneak peaks of this quilt for waaaaay too long now, but the wedding was yesterday and the quilt has been gifted, so I can finally show the finished product. 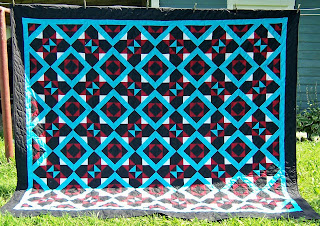 (Not the best photo, but I procrastinated so long, I didn't have a chance to do any better.)
You'll remember that I found the quilt here and had to wait for the magazine with the pattern to come out and made 3 trips to the store for fabric for the front (add a fourth for backing fabric) and moaned and groaned about matching all those points...

Can you believe that was all the way back in February?  I'm pretty darn good at that procrastinating considering I finished just this past Monday!
All that's done now.  And I like it, though not as much as I thought I would.
It's bluer than I anticipated, but the original had red borders and two blues, both a bit paler than the one I chose.
I left the quilt on the gift table last night, as the bride and groom were too busy dancing and having a wonderful time to open gifts.  (But that's the norm, right?)  I don't know if they had time to open them this morning already either because they headed out early for their honeymoon, but since my hubby works with the groom, I know I'll get some feedback when they return.
The wedding was nice.  A nice, simple ceremony, decent reception food and free beer.  I'm doing just fine this morning, but the hubby is another story...  I'm trying to be quiet, but considering a pots-and-pans band to pay him back for las night!  (He doesn't drink often, but when he does and it's free and his buddies are there...look out!  He had a great time, though!)
I also gifted the elephant baby quilt last night, but I'll save that photo and story for another post.
Today I hope to work on the pinwheels for the last of the baby quilts in this bunch, but if the hubby says that's too much noise, it's back to the Whig Rose.
Happy quilting,
Katie
Posted by Katie at 9:11 AM

Your quilt is just awesome!!!

All that moaning and groaning to match the points ws worth it! The wedding quilt looks stunning!

The quilt is very special, and I'm sure will be much loved by the bride and groom. ---"Love"

The quilt is just amazing! Love it!

Ah, so that's what it looks like! Lots of little pieces. I would have moaned and groaned too, LOL! It turned out beautifully!

It's a stunning quilt and I love the strength of that blue. Poor hubby! Ann :-)

I think that your colors are perfect. The quilt looks so different all done. I liked it before from the peeks, but it is just awesome. What a great job you did on all those points. They will love it.
Happy stitching.

Ryan and Jess are one lucky couple. The quilting is really lovely, and I love the colours. Poor hubby, indeed!

Terrific quilt. They are sure to love it.
I can't wait to see the baby quilts. Connie 204