After much procrastination, I finally decided it was time to sew the bindings down on the charity quilts I made in June.  It's about time, right?  They'll be sent to the Quilts for Kids charity soon!
Judy L has a great tutorial on sewing bindings down completely by machine.  It is requested that the whole quilt be machine sewn, as it gets a lot of washing at the hospital and this was good motivation to learn.  It went okay - I got better as I went along, but I still like the look of a hand-sewn binding better.

(Yay finished.  Boo mosquito bites while photographing.)
Right now they're in the washing machine getting a final defurring, also as requested by the charity (washing in general, not defurring specifically, but that's the issue around here).  No biggie - all the fabrics have been washed before I sewed them and with a stash of Color Catchers, I'm not worried!
I'm so glad to have these done.  Not bad for baby quilt leftovers, right?
The wedding is this weekend - so you'll be seeing the full debut of that finished quilt soon!
And the groom is the uncle of the new baby to be getting the elephant quilt (born Friday August 19th).  That may be given at the wedding, but if not, soon after - and then it will get its day on the blog too.
But you're probably wondering what I've been doing (other than sewing those zillion inches of queen-sized wedding quilt binding down), so here's a few more photos: 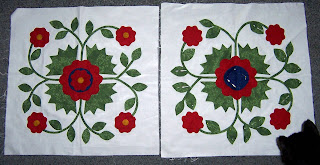 Whig rose blocks #3 and 4.  #3 is now complete and #4 is well on its way.  All of a sudden these are going fast, but when you're just looking for a job (rather than actually going to one), you might find yourself with a little extra time on your hands...  (Hi Tucker - yes, I think there's enough of your fur on that already!) 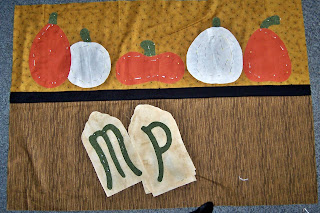 And a new fall project some of you might recognise...(and Tucker's ear again)  I'll share more when I'm further along.
As for the job search, nada.  Though I've visited my old workplace to see grad student presentations and had an opportunity to put a bug in the ear of former coworkers that I would like to come back, grand funding permitting.  I've also been filling out a mind numbing number of applications, most of which are going entirely ignored.  :(
Studying has picked up again.  I got approval this week from the certifying agency that I can take my exam, so that is scheduled for the September 6th (the soonest I could get) and I'm ready to get it over with.  Not so much ready with the studying part, so that's consuming much of my time, so I guess it's not all bad I don't have a job - I can properly prepare for the exam!
So there you have it - my exciting life.  I hope you're all getting lots of quilty stuff done!
Happy quilting,
Katie
Posted by Katie at 4:29 PM

Good luck on your exam....I love your applque and all of your quilts.

Such cute quilts, and for such a worthy cause! The punkin's are cute too, but those whig roses are gorgeous! At least it sounds like you are staying busy in these tough times. Today I've been working on borders for the Underground Railroad; I finally decided what to do, and I think it's going to work just fine. Hope to finish this week. ---"Love"

Love the quilts and you are doing a great job on the applique! I sympathize with your job search woes. I am in the same boat. Send out at least 2 to 3 applications a day and never even get so much as a "We got it!" Makes you wonder...

That is very good use for leftover fabrics and the little quilts are adorable. I'm sure they will be very appreciated and much used! The Whig Roses look fantastic. That will be a stunning quilt! The pumpkins I saw in the APQ magazine and thought about making them, too. I don't know if I will follow the instructions or use the patterns and put it together my own way. Keep those pictures coming. I don't envy anyone who is searching for a job right now. It has to be so frustrating. Hang in there, with your education and qualifications, the right job is out there just waiting for you to find it. Best of luck with your exam!

Thanks for the link to the great tutorial. I attach waistbands on skirts and pants that same way (just think of a waistband as a wide binding).
The charity quilts are all so cute, and I am looking forward to seeing the wedding and elephant quilts, too.
Continued good luck on the job search. I'm sure that your perfect job is out there, just waiting for you.

Your kid quilts are bright and cheerful, just what's needed. I'll have to check out that machine binding tutorial - it would make placemats so much faster to finish. Your applique looks good and is moving along at a good clip. I'm looking forward to seeing it together with the star center. Good luck with the job search.

Your quilts look amazing! I've tried machine binding with mixed results. Lovin' the Whig Rose blocks (but then I do have a soft spot for them). Keep trying with the job search - something good will come your way. Ann :-)

The kid quilts are so cute. Cheerful too. The Whig Rose blocks are just fantastic. That is going to be an amazing quilt.
Hang in there with the job search. A good one will head your way.
Dont forget to take some breaks from all that studying.