This giveaway has been closed and the winner announced here.

I'm not sure if my day is at an end yet or not, quilt-wise, but the hubby called about 15 minutes ago and he's due in about another 15.
So here's where I stand with the quilt units: 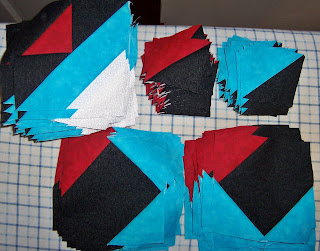 Those smaller half-square triangles get sewn together in 4s to make the remaining units.  I had hoped to get them together so I could show the block layout, but I suppose that will have to be another post at this time.
I'm getting pretty sick of this quilt about now, so it's a good time for a break.  :)
It seems there are quite a few giveaways out there in blogland today, but I had no idea when I came up with my plan last night to do one myself.
This pattern required lots of trimming of excess fabrics, so I thought I'd give the extras away.  I know I'll never use them! 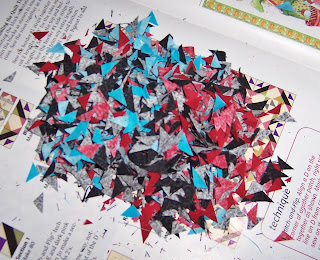 Ha ha ha ha!  Bet you thought I meant I was giving away those little dog ears!  Nope, those are safely stored in the trash already, but I thought it was a crazy amount, so I took a photo.
What I'm really giving away: 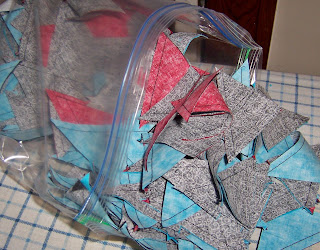 There were a lot of corners cut using what I've learned as the "lost corner" technique where you sew corner-to-corner (diagonally) and cut off the excess.  Lots of triangles.  I went ahead and sewed again through the piece that would be lost to create a TON of halfsquare triangles.  It would have been a lot of wasted fabric so I thought I'd give them away!
The specs:
120 blue and white
120 red and black
240 blue and black
About 2" square
(but you'll probably want to trim them up because I just eyeballed that seam)
All fabrics are from JoAnn's, recently purchased.
(in other words: you might be able to find more if you want it)
All fabrics have been prewashed.
How to win?
If you have an idea of how you WILL use these, let me know.  I'd like them to go somewhere they'll be used, not just languish in a stash pile like they would here.  So I'll give you a few days to let your creativity simmer before drawing a winner.
If there are more than one of you who would like them, I'll draw a random number.
(That means you don't have to outdo each other trying to win my praise...if you use them, I'm happy!)
The drawing/announcement:
Wednesday, March 16th, 2011
(That should give me enough time to get your address and get them stuffed into a flat-rate box (I hope they fit!) and take them to the post office on Saturday.)
Open to everyone - I'll ship internationally.
Happy quilting!
Katie

PS If you want to comment but not be entered, that's okay.  You'll only get a chance to win if you tell me what you'd use the little half square triangles for.
Posted by Katie at 4:45 PM

I am anxious to see the layout for this quilt. I like the colors so it will be fun to see how the pieces come together. The last thing I need is another project to work on, so good luck to whoever wins. I'll check back to see the ideas people submit to use the giveaway fabric.

I'm intrigued about how those crisp units will come together. Keep us posted. Giving away those bonus triangles is a great idea. I save them and then rarely use them. Hopefully someone will be inspired to use them up!

Me, me, me! I want them! Liri just bought a black fabric with colored numbers on it and those triangles would really work together in the I Spy quilt I want to make!
Flit, please, I have enough projects for now.
But you said I could play again! You liked Pinwheel Parade, didn't you?
Yes, but...
Katie, I WANT those for the border! Can I have them? PLEASSSSS?
Ah geez, Katie I am so sorry! Flit got loose again.

Katie can't wait to see the layout.
I hope Flit gets those little HST otherwise she is gonna drive Liri crazy.
( Kinda reminded me of you and the right brain-left brain conversation). LOL

I think your give-away idea is a great one, but I have bunches of the same sort of things! I agree; send them to Flit! I'm anxious to see your quilt blocks come together, but I can understand why you would need a break! ---"Love"