I haven't done much sewing all week.  I started with a scratchy sore throat Tuesday, which wasn't bad, but I expected it to turn into a full-blown cold.  It hasn't.  Still a little sore, still not myself.  And to make things worse, yesterday while snuggling my kitties on the couch I managed to hurt my lower back.  I have no idea how, but now I'm hobbling around like a very old woman, moaning every time I have to bend!
But after reading what Windsom Winds had to say about her experience with older quilters assuming younger quilters know nothing, I thought I'd tell one of my favorite stories of "revenge" on that type of quilter.
The first ever quilt retreat I attended, I was about 24 or 25.  Probably 1999 or 2000.  Before I was married, but I was living in the same town as my future hubby by then.  (So I was probably working on that yellow Rose of Sharon quilt you all saw a few posts back.)  My mom and I went together and roomed together, but there were two classes offered: a chenielle jacket or a mystery quilt.  Since I don't really care to wear my quilted creations (unless my back hurts and I'm snuggled up on the sofa), I opted for the mystery quilt.  My mom likes to wear her creations, so she made the jacket.
The registration confirmation contained directions for the mystery quilt fabric buying.  Something like light, dark and contrast.  I'd been helping my mom ("in training") for years before I actually got up the nerve to sit down at a machine and sew, so I knew what they meant.  I love purple and found some great stuff at JoAnn's.  I packed up my stuff, took an afternoon off work and headed out into a beautiful fall day.
In the mystery quilt sewing room, we shared tables.  I knew noone.  My mom knows everyone, so many people knew WHO I was, but I had no idea who they were.  Because I didn't have a friend in the room, I ended up at a table with an older quilter who was there alone, too.  As I looked around, I had to giggle a little because she was clearly the oldest quilter there and I was clearly the younest.  We shared a giggle over that, but got to work.
I think most of the remaining quilters looked at our table as "special" - assuming we were too young to know what we were doing and too old to be able to handle these new-fangled techniques (rotary cutting, chain piecing, etc.).  I just smiled to myself.  "We'll see," I thought.
We worked diligently, helping each other far less often than other table partners, and were usually the first two in line for the next "clue" to the mystery.  We ripped very little (though I'll admit we both did) and were significantly ahead of the pack by the end of the first day.
By the end of the retreat, I was able to "solve the mystery" with a completed top.  My table partner had hers almost finished - I think blocks into rows, just not together yet.
So here's the mystery solved: 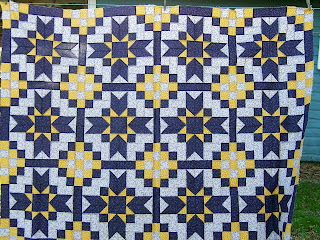 The block is called Blackford's Beauty and it is a little tricky.  Lots of pieces/cutting.  But I like what I ended up with.  I clearly did a good job of picking light, dark and contrast, don't you think?
One gal I remember ripping a LOT chose three shades of red florals.  Her goal was something like a watercolor quilt.  Others didn't do as well picking either light and dark or dark and contrasts and were ripping a lot, too.  I don't mean to judge.  I do my share of sewing things incorrectly and ripping, but it's a little diffifult to be 100% nice when the weekend started out with these ladies making unfair assumptions.
I think many of these ladies went home with a new appreciation of the abilities of quilters NOT based on age.
When I arrived home, tired and excited, I showed my hubby and he said "You should frame that."  This was before he'd invented the "Biddyhood" and fat halves (or so he thought).  His family is not a creative one (other than word-wise) and he had no idea what this was for.  Today I wish I'd taken him up on that - for no reason other than to torture him with his ignorance!
It's still just a top.  I didn't buy enough of the gold to do more because there was no more.  And it's purple - what do I do with that?  My couch is red!  And it's throw-sized.  So for now, it goes back in the box of tops and one day I'll figure out what to do with it.
I also had an interesting conversation with the hubby last night.  He has a fishing boat and wants a newer, nicer one.  There is nothing wrong with the one he has, it's just not as fancy as the one his buddy has...  We are about to pay off a decent-sized bill and years ago I'd ignorantly said when that one was paid off, he could use that "extra" money to get a new boat.  Well...
Last night, we discussed his having a boat, a nice, newer truck and a nice, newer car while I have a $169 sewing machine and 11 year old car (I love both, thank you), so maybe I should get the next toy.  I think he thought this was going nowhere and I had no toy in mind.  Now you quilters probably have this figured out, but guess what my toy is?  A long arm machine!!!  He said so long as I can get it for what he would have paid for his boat (my budget is $10,000, which I think MIGHT get him a boat that floats, but not all the bells and whistles he wants) I can get one first.  I have a LOT of researching to do, but I don't want anything terribly fancy.  Stitch regulator and large enough to do a king-size quilt is all I really need.  But maybe my research will turn up more...  Anyone have any suggestions?  I'm VERY open right now!
Happy quilting!
Katie
Posted by Katie at 9:10 AM

Your mystery quilt is beautiful. Eventhough it doesn't match your decor, go ahead and finish it. It can always be "tossed" on the arm of a chair or cuddled under while watching TV. You could use it as your picnic quilt. It is just too pretty not to finish!

Ohhhh, a long arm machine would be great. Just take your time, do lots of research and talk to other long arm quilters about their machines before you invest that much money. You want to make sure you get the machine that will work for your style of quilting. I'm jealous, that is a great opportunity for you!

Your quilt top is really, really pretty; please do quilt it!
I took one class in which I was probably the oldest, and certainly the least experienced quilter; I too was looked on as too old to learn anything. I admit I didn't learn much from that teacher, but I have learned how to dig out instruction on my own! It's amazing what can be accomplished by persistence and patience, both of which I have in abundance!
Good luck on your long arm pursuit! ---"Love"

Oh I squealing for you getting a long arm machine!!! That's so exciting! I know nothing about them, so I can't give advice, but I'm sure you'll find a great one. Loved the story about the mystery quilt. We young quilters know a thing or two ;) Your quilt came out great :) Christine

I am glad that you and your "partner" were able to show what happens when one assumes! Your quilt is just beautiful! You must finish it one day it is too good to hide away.
I am soooo excited for you. A long arm. There are just so many out there. What I have heard is that the gammil is great. I think they are top of the line price wise too. I would take a look at the Tin Lizzie, I have played on one at a show and it is reasonably priced and has lots of nice features. I have seen that they have a new model out fairly recently. Good luck!
Hope you feel better soon.

I just love your story! That revenge certainly is sweet and I love the quilt results. My sofa is red too, but I've decided I don't care about quilt colors matching the living room...if I finish off a quilt I display it even if it doesn't match.

I'm so jealous that you have a budget for a long arm! That is still many years off for me, so I hope you can enjoy it for all of us who are still dreaming of the day.

Katie, I loved your story. I didn't start quilting til I was old, still am and still want to learn. The quilt turned out great. I agree quilt it. I know nothing about long arms and don't have the room for one, but I know lots about boats. My DH has always had one, then a bigger one, then a bigger one, and now a little one again. Good luck in your search and and I'm sure you will love what every you get. Connie 204

You chose your fabrics well for the mystery quilt. It looks terrific. Glad you had the last laugh at retreat. Wow, a long arm quilter. That should be loads of fun! Cheers, Ann :-)