I'm still giggling...gotta get myself calmed down to write this...
Tonight the hubby and I went to my parents' for dinner.  We arrived first, then a few minutes later, my next younger brother, M, and his quilter-wife arrived.  Youngest brother, A, and his family were going to be much later so we planned to eat dinner without them.  (They were eating elsewhere.)
While waiting for my dad to return from something, we somehow got talking about the "sasquatch cam" (wildlife camera) brother A had put up in the woods.  My parents live on about 7 acres and most of it is wooded and a flood plain from a nearby river.  It gets pretty mucky towards the back of the property, but brother A hunts deer, and he and his buddy, D, built a "treehouse" (deer blind) in the fall and this spring put up a sasquatch cam.
We got to giggling about messing with the camera.  Thought maybe we'd trigger it...a few possibilities were tossed out, but then I remembered my mom saying she was cleaning stuff out in the basement (stuff that got packed away years ago, then moved to the new house without being unpacked!) and finding an ALF costume that had been brother A's in about 4th grade.  I was hoping she hadn't thrown it out yet, as she said it was in pretty bad shape.  When she found it, things got serious.
For those of you who don't know who ALF is, it was a television show that aired in the 80's.  It was about an Alien Life Form (hence ALF) that crash landed here on Earth and lived with a family.  He was a smart-aleck, cat-eating, party animal and it was a pretty good show (other than his trying to eat cats - which he was never successful with).  One year, brother A decided he wanted to be ALF for Halloween.  My mom is pretty darn good with sewing, but this is a furry animal we're talking about.  I think it's a contest whether the ALF costume or the bridesmaid dress I wore in a friend's wedding a few years later was the worst.  The head was made with doll-type soft sculpture techniques and my mom worked VERY hard.  A was thrilled and probably would have worn it for weeks.
Here's a link to a favorite ALF moment.  It won't let me embed it here.
So some of you probably have figured out where this is going...  First I put the head on...it fit.  Then they decided I should try the rest of the costume.  Now Halloween around here is pretty cold, so my mom made costumes roomy enough to fit a full snowsuit under them...  The arms were about 8 inches too short and the legs would properly qualify as capri-length and it was riding up a little, but we got it on and zipped.  Mom, brother M and I headed out to find the camera.
We found it quickly thanks to the orange tape wrapped around it... 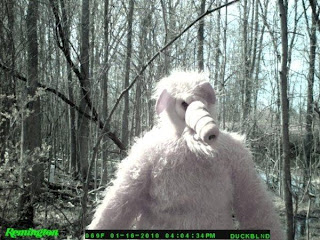 So an hour or so later, with the costume safely stashed away again, brother A and family arrived.  My dad was assigned to casually ask about the camera because we had discovered he'd already been asking about it a few days back.  Least obvious plant there.
Shortly thereafter, brother A and his youngest daughter headed out to check it.  8 pictures!
It has an SD card they pulled out so we could see the pictures at my parents'.  While brother and niece were out, we informed the remaining family members of what was going on.  Oldest daugher (my niece) was so excited she almost blew it, but since she's started to hunt with my brother, her enthusiasm had a good cover.
He's flipping through the pictures - oh that's friend D's ceiling, oh, that's us setting it up, nothing, nothing, nothing, nothing, silence...grin...we all start giggling and he's trying to play it cool, but realize we're crying we're laughing so hard and he starts giggling too.  He knew what it was.
So the plan is to give the SD card to friend D and say nothing.  Act like he hasn't seen the pictures yet.  I would LOVE to be there because D has no idea about the ALF costume.  He moved here years after that Halloween.  So he'll probably have NO idea what this is.
And I'm amazed that this is the ONLY picture of me it got.  But we realized it was set to take pictures at one minute intervals when my brother started looking at it.  So I suppose we did him a favor.  It also thinks today is March 14th.
And to make it even funnier, the family members that have married into the family were not giggling nearly as hard as those of us born into it.  Just thinking about it still makes me giggle and I think it probably will for a while.
We had plans to hang GI Joe helicopters and whatnot my mom found in another box from fishline and have a battle in front of the camera later, but A showed up too soon.
And just in case you thought this silliness was limited to my family... 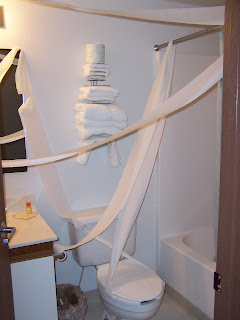 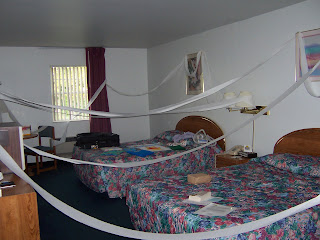 This is what happens when you attend a quilt retreat with my mom and I, admit you've never been toilet-papered and leave your key with us to give to your roommate who hasn't arrived yet while you go to dinner.
Once again, crying with giggles.  Still.  And this was downloaded to my computer in 2006, but I'll bet it was a few years earlier than that because we got a new computer then...
Don't worry, we raided the men's bathroom off the all-purpose room we were using at the hotel.  Noone went without toilet paper that night.  :)
Back to the quilting...
Katie
Posted by Katie at 9:06 PM

Ohhhhhh! I love your ALF trick, that had me giggling and I called my husband in to check out the picture. He is a hunter, too, and some of his friends have cameras. What fun that would be! My husband said it is now time for you to give the fake lottery tickets out as a holiday gift! Your family sounds like so much fun! ! !

I love to hear/read fun family stories like that! It's great when families can laugh with and at each other. You are having fun now with past memories, but this one will keep you giggling until you go to your grave! Thanks for sharing! ---"Love"

LOL. I love the ALF costume and the whole prank just priceless. Wish I could have seen your brother's face when he saw the picture. This will be a family story that will always bring laughs. Thanks for sharing.

I love your new look :)
-Joanne

I love this sort of thing!!! Laughter makes the world a better place;) Looks like something I would pull;) Keep up the giggles;)
Happy Quilting!!