As you know, I keep forgetting about the photos of my most recently completed tops - and we've had some great days to get them - but this morning I hauled them out, into the dew-laden, baby mosquito-filled yard and got them hung on the clothesline.  I fought the sun, just peeking over the trees (that are only half-leafed right now) and the gentle breeze that is always stronger in the back yard, but I got the photos done.  (I've done worse!)
First up is Easy Addition: 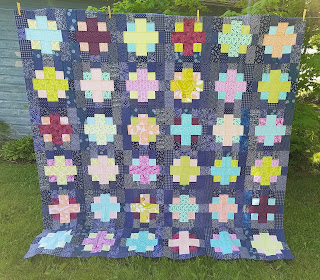 And second is Tumbleweeds: 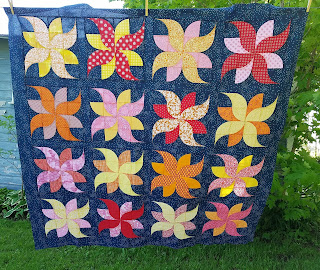 I have places to be shortly, and I don't remember the sizes.  Obviously, one is larger than the other, since one is dragging on the ground, but otherwise, who knows?!
I promise when they're finished I'll have sizes for you.
If that ever happens.
I seem to be quilting little lately, but a big stash of fabric for hammocks and a call for catnip toys has sidetracked me.  And I'm still okay with it.
Last time I posted (I forgot last week - oops!), I was in the process of getting labels made for cat toys.  That took a while, but I got them done. 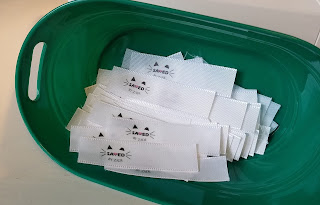 I counted what I had in the stack and found I had cut 93.  Holy cow!  I decided, since the labels were printed in columns of 20, I'd just make a few more and do five full columns (minus the one I used for the test). 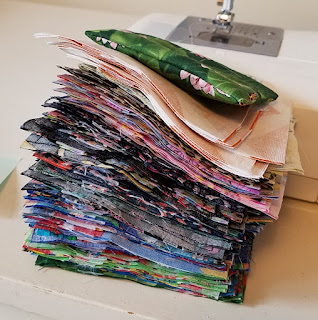 I sewed and turned just one to make sure I had the placement correct, since the labels are directional (not that it really matters, but it does to me), and then I took off sewing.
I trimmed the corners and set them aside.  Last Monday was the sewing day for my guild.  So I decided that would be a good place to use catnip.  You know, no helpers.
I got 60 done there before everyone was packing up to go home.  It seems I can complete about 10 in an hour.
A few more hours (and fights) later, at home, I had the whole pile finished.  It took more catnip than I had stashed, so I had to buy another container.  Oh well.  Anything for the kitties! 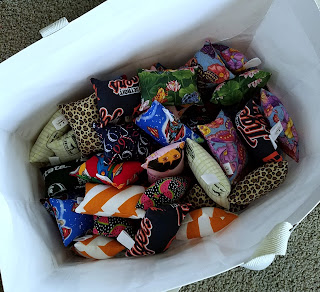 Here they all are, piled in the bag the most recent stash of fabric came to me in.  Not quite full, but definitely a lot.
Yesterday, a few volunteers were at a "swap meet" in a vacant lot just up the road from me, so my volunteer asked if I could drop them off, as well as any hammocks.  So I did!  The gal I gave them to sniffed them - apparently she hadn't been warned they were coming - and I laughed.  Each one got about a tablespoon of dried catnip (I was using an old half tablespoon measuring spoon to get the catnip inside...so stuffing, catnip, stuffing, catnip, stuffing and sew it up!), so she got a noseful!
I also got to see a couple of my hammocks in action, as they had a couple of kitties there.  In crates, shaded, with food and litter and all that.  I never thought to take a photo, but the kitties seemed pretty chill about the whole situation.
(They were at the swap meet more to get the word out about their organization than to adopt kitties.)
I still have more than half the fabric, but I'll keep sewing.
And Toby will keep snoozervising. 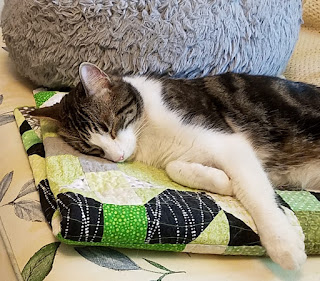 (They have been allowed out into their enclosure a lot lately, with the weather being nicer, and he was crashed out here for hours.  He didn't even move when I got up to take a photo.  Usually he moves into a less cute pose when he hears me.  It's like he knows...)
Happy quilting!
Katie
Posted by Katie at 11:12 AM

NICE tops!! The cat toys look terrific - that's quite a variety of fabrics! And I had to laugh at "snoozervising" - it's such an appropriate word - ;))

Both quilt tops are lovely! The Tumbleweeds is super pretty - looks like a lot of work though. I'm into easy right now. Great job for the kitties!!

Ohhh, I love Easy Addition. What a great quilt!
LOL. Good choice to take the catnip away from home to avoid "help." If you'd had help I know you wouldn't have finished 10/hour.