a left-handed quilter made me do it

Before we get to what someone else made me do, let's have an update on the last project!
I last left you with a layout for Well Suited.  I picked it all up and procrastinated a bit.  I knew matching those points was going to be difficult, but eventually I talked myself into just doing it.
I decided I needed to re-press some of the seams so nesting would happen.  That was easier said than done, as it required me to press towards seams, not away from them, but I persevered.
It was slow going.  I wasn't in a big mood to sew, but with podcasts in my ears, I managed to find a flow and forget the eons it was taking to sew everything together.  As I finished a row, I placed it on the floor.
Gabby was very happy about this decision. 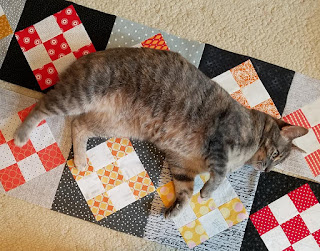 She rolled around and flopped back and forth and demanded pets and all sorts of cuteness.  Of course, I gave her all the pets!  How else am I going to effectively procrastinate and not feel badly about it?!
The first two days I dragged myself into the sewing room, I managed two rows each.  I sewed the rows to each other as they were completed, thereby stretching out the LOOONNNGGG seams and breaking them up.  The days were not consecutive, but finally I had half a top!

And although this looks like it should be inspiring, it wasn't.  The points were randomly matching well or poorly.  But by this time, I had made my peace with less than stellar points and kept sewing.
The third day, I dug in.  I could get the second half finished! 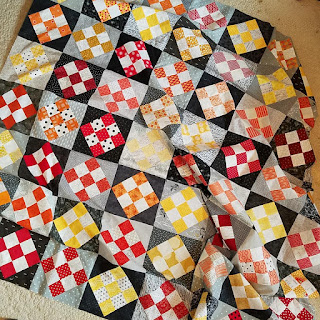 And I did!
I wanted to take it out for a photo, but it has been very windy here since the finish, so this crumpled shot on my sewing room floor will have to do.  It alternated between snowing (flurries without accumulation) and sunshine yesterday, and this shot happened in a sunny stretch.  It was a bit dismal and gloomy during the snows, but I know that is what is to come for a few months now...
This morning I woke up ready to quilt this, which is unusual.  So I decided I would head to my local quilt shop for a back.  I took a shower, put on pants and a bra and then went "WAIT!"  I have some sunflower fabric, purchased for the back of another quilt and then I changed my mind.  Would that work? 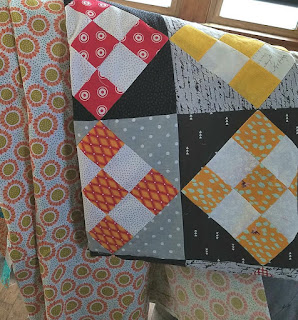 Why yes, I think that will do just fine.  I probably wouldn't have chosen it on this shopping trip, but I really am trying to use up some of my stash and this seems so appropriate, I can't easily justify not using it.
But now I'm wearing pants and a bra.  Yuck.
(wait..I should probably clarify...I DO wear pants, just not going-out-appropriate pants...like sweatpants or leggings...when I'm staying home)
Of course, it was about 15" too short, but I have a few larger chunks of orange, so I just added a chunk onto the end and made it big enough.  Win-win as far as stash reduction goes!
And now, what A Left-Handed Quilter made me do.
She has been making some very bright churn dash blocks from 2.5" strip sets over the past few weeks.  I also keep seeing churn dash quilts popping up in my Pinterest feed.  So it seemed kinda inevitable that a churn dash quilt was in my near future.  Of course, I had visions of bright colors, perhaps a little on the controlled side of scrappy, but then I remembered a "scrap" bundle purchased at the retreat in January... 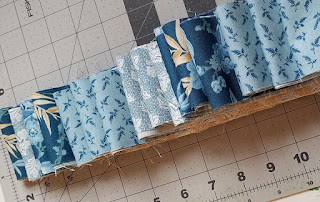 There are upwards of 30 width of fabric strips in here, though not a lot of variety.  I separated them into lights and darks (though some of the fabrics worked as both light or dark, depending on what they were paired with) and paired them up.  I think I counted 17 sets?
And then I cut pieces and started sewing.

I tried to get the directional fabrics to all go the same direction, but...well...oh well!
These go together fairly quickly and before I knew it, I had two! 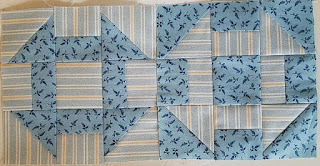 Definitely not my usual choice of colors, but these are pretty cute little blocks.  I cut another set of strips (there will be a fair amount of repetition here) and sewed another set! 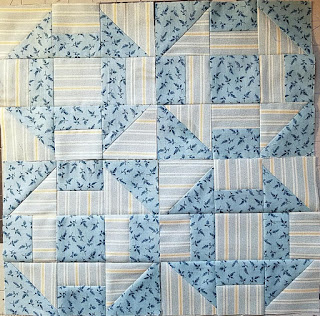 And from here, I had one more set of strips matching these and cut another two.  Then, using leftovers, cut another two sets.  But then my podcast ended, so there are pieces for four more blocks waiting for me to return to the sewing room.  Tomorrow?  Or perhaps the urge to longarm the 9-patch quilt will linger and that will be my project.  Either one will be a win!
Freddie and Finn are being fairly elusive lately.  They just sleep, often somewhere near me, but don't volunteer to snuggle (unless I'm sleeping) or do anything remarkably cute.  I think they are angry with the turn in weather that is keeping them inside - away from their beloved outdoor playland.  (We are predicted to have some 60-ish weather in the coming week, but I'll believe it when I see it - and THEN the kitties can have one last hurrah outside.)
Toby, on the other hand, took full advantage of a quilt-filled lap yesterday and gave me a good snuggle! 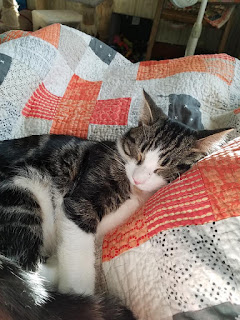 He is getting the hang of people snuggles with mom, but I think mostly he was exhausted from throwing himself at the big picture window all morning.  Those blowing leaves are an incessant nuisance that he cannot ignore.  I'll take snuggles for any reason at all.
Speaking of kitty snuggles...my sewing for the day is likely done, as the hubby will be up soon, so I think it is time to go start a new book and see if perhaps I can get a short stretch of kitty snuggles this late afternoon?
Happy quilting,
Katie
Posted by Katie at 4:19 PM

Haha - your title cracked me up! I thought - oh, crap - NOW what did I do?!?! I like your "Well Suited" blocks - but I like your "Churn Dash" blocks MUCH more. Mine are so cute and addictive - I'm looking forward to seeing yours come together - and to think - it's all MY fault - LOL - ;))

Your nine patches are looking good, I love all the color! But, those churn dash blocks are gorgeous! I love the blue ones so far, so pretty! ! !

I love those blue and white blocks! The sunflower backing will be perfect for the other blocks too! That will be a really pretty quilt. All I have to report is I washed 3 yards of fabric today; didn't iron it yet, and to be truthful, I don't know when I will. Just not up to much today. ---"Love"

Too funny Katie! As if you need to side pass the *blame* for another quilt. Your projects are looking good and even better when kitty-decorated. Snuggles and pets are good for your health.

Pants and a bra, yuck! My sentiments exactly!!! Thank you for the belly laughs and the fabulous quilt designs!

I love your quilt top and the churn dash blocks. Reversing the fabrics is a good idea! At first I thought you meant the pants were 15" to short and I had already pictured that in my mind before I read the rest of the sentence! Of course, I love the churn dash blocks! This week I went to get some backing at Joann's for a couple quilts, including my churn dash quilt. I saw some fabric that would make a good backing, but didn't want to buy it yet because I needed 5 yards and I had a 60% off coupon and hoped when I went back to use it the fabric would NOT be marked down. So when the coupon was active, I went back and the fabric I liked was all gone!! and I didn't like anything else for the churn dash, but I did like something else I saw. Unfortunately, the fabric was marked down again but instead of 25% off it was marked down to $6.99 from $8.99 which is almost 25% off. I bought the 3 yards I needed for the smaller project, but was still disgusted for the manipulation they impose. Maybe they are smarter than we are? Later I went to my LQS and paid $7.50 per yard for 5 yards from their basement sale section. At least I know the fabric there is great quality. Maybe you will hit 60 degrees today. Chicago area where my sister lives is supposed to go up to 75. Our high today will be 48 which is fine with me.

Oh! congrats on getting that quilt top finished! It's absolutely lovely. Man, I hear you on the pants and bra "yuck" - I think I've put a bra on a total of 15 times this year. . . lololol Gotta say it hasn't been a sacrifice!