Last week I shared my start of a new project.  And teased you with stories of more sewing, but no photos.
Well...I kept sewing and forgetting photos again this past week!
But today, before I started anything, I remembered to grab a photo of the blocks finished, but not quite finished... 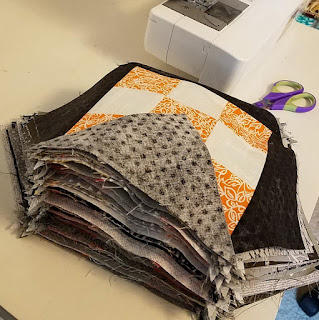 At this point, the blocks have been finished sewing-wise, but needed pressing and trimming.  I finished sewing these earlier this week, but time ran out, so pressing did not happen.  Then I worked about fourteen days in a row (or so it seems!) and just didn't have the energy after work.  (We've been busier again - we had a little lull of more normal pace, but we've really not dipped back down to what normal was last year or the year before and we seem to be on the uptick again.)
Today, finally, I had time and energy for pressing!  It doesn't take THAT long, but standing there for 63 blocks is enough to make tired Katie go read a book instead. 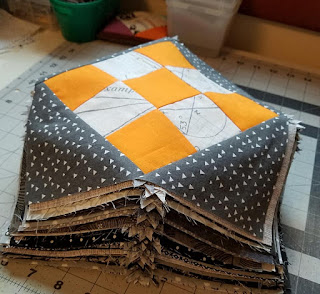 In no time, I had them pressed.  But they still needed to be trimmed/squared.  They're not THAT off, but a little time spent trimming rids me of the "dog ears" and helps the blocks go together a little easier.  Of course, all those pointy corners that need matching are scaring me, but I'll conquer them because I want this quilt!
So I trimmed them and about that time a friend called, in town doing a few errands, and told me to meet her at the local quilt shop.  Well, that doesn't take much arm-twisting!  I bought nothing, but did get to visit with her, so it was a good (if not short) trip out.  (Yep, I wore my mask.  The one with vampire teeth, of course!)
When I got back, I ran Big Purple, the vacuum.  Because my design floor is usually in use as a cat wrestling ring and was a little furry.  Also, it just needs to be done from time to time.  But mostly because I wanted to lay these blocks out and figure out how to sew them together. 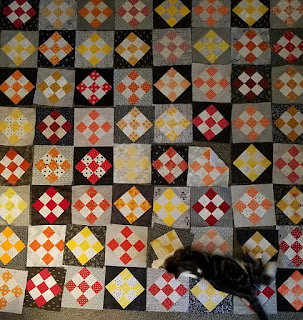 I mostly just set them down as they came off the stack, placing them by colors as appropriate, but didn't worry too much.  There is a lot of variety and I knew I could spend all day rearranging them, so when I had a fairly good distribution of backgrounds and such, I picked it back up.  (And the little time I did spend trying to move things around had me going batty.  If you move one, thirteen others are in the wrong spot and really?  It's not going to matter when it is done.)
Toby, aspiring quilter, took a run at helping me.  Kinda literally!  He wasn't as enthusiastic as some cats, but this was his first time on the design floor, so he may decide to hone those skills.  Or not.  Finn also helped, but he wandered off after he figured out that this quilt will match his furs too nicely and therefore he is not as much of an asset.  (Toby also matches some parts, but he is still learning the finer points of the role of Quilting Cat...and determining how he would like to interpret them.)
So this is where the quilt stands right now.  I'm staring the center/corner points in the face, dreading matching them (maybe I should have pressed them opposite directions?  maybe I can finger-press them as I go?), but I'm not in a rush, so it will be there for me when I'm ready for it.
Finn would like to remind you, again, that he is tirelessly helping the humans.  This past week, he took over Freddie's job of Grocery Inspector. 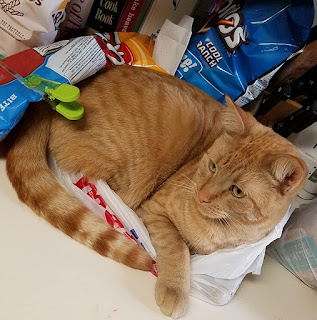 Since the pandemic has disallowed the resuable shopping bags, Freddie has declined helping.  Finn, however, loves plastic bags and jumped right up on the counter and burrowed into this one.  By the time I got to a camera, he had gotten his ear out of the handle, but he still looks pretty cute.  And to anyone who does not have cats - they get on the counter.  They ALL do this.  Some are sneakier than others.  I just assume they've been up there and clean it before cooking.  A little extra work, but, well, it's the price I pay for having fur-babies.  I wouldn't trade it for the world.
Gabby would also like you to know she is pulling her weight.  This past week she has caught not one, but TWO mice in the house.  Wednesday night she woke me up with the first and Saturday morning, she was playing with this one when I got up. 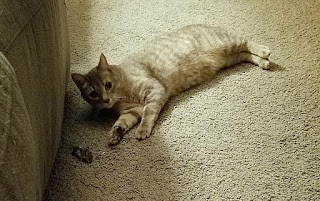 Again, some of you who don't have cats might think this is gross, but I find their droppings in my cupboards much worse.  Of course, we still have that from time to time, but this girl is fierce.  Formerly feral, she enjoys the perks of housecatting, but has retained that instinct to hunt and play with rodents to death.  She no longer eats them (I found Wednesday's catch in the bathroom sink on Thursday morning!), but she has a good time tossing and swatting them, even after they've expired.  She has taught Freddie and Finn to hunt as well, but is still busy snarling at new kid Toby, so we'll see if he gets to learn or not.
And Freddie would like you to know that all this vile behavior of the other cats liking humans is simply disgusting.  He is busy being a True Cat, disgusted by humans and aloof to their needs to pet or love him.  Unless he needs some pets.  Then it is okay.  And we must feed him.  He may not eat it, but he needs to have it put in front of him to sniff.  Wherever that is.  Never in the kitchen were food is served.  (Stubborn little brat!)
As I'm sure you have guessed by now, I don't have much quilty stuff to share.  So instead of risking too many cat stories, I will sign off here!
Happy quilting!
Katie
Posted by Katie at 4:42 PM

Love your blocks! - And you're right - you could spend a lot of time re-arranging them and it doesn't really matter when it's done. Love your fur babies, too - and never tire of their stories - keep 'em coming - ;))

Lots of little pieces in all those blocks! It will be a really nice quilt when finished. Glad you are enjoying your kitties; I just couldn't (nor would I want to)take care of the litter boxes! ---"Love"

Yes, cats do like to hunt! - most of them, anyway, if they have had the opportunity. A couple weeks ago I saw a mouse in our yard. He wasn't very lively and eventually made his way to the yard next door. I think he was sickly (might have been poisoned, or something). Maybe he lives in the wood pile that my neighbor has. That is the first time I have seen one here. BTW, your blocks look good! I'm going to post my churn dash blocks that I just sewed together!

Your on-point nine-patch blocks will make a stunning quilt! I love the yellow to red and grey to black color ranges.
I enjoyed reading the antics of your cats. I had several cats (in sequence, not at the same time) when I was a kid and into my young adult years. They did not get on counters. My mother would never, ever have permitted it. I don't know how we taught them to stay down. And the ones I most remember loved to be held and petted. My daughter currently has two cats she brings with her when she comes to visit. They are very unlike the cats I grew up with. Both are fairly aloof and demand fresh water and a full bowl of food always. The male is fearful of everything new, the female is ready to face things head on. We keep them out of the kitchen because the female likes to climb into the cupboards. It's a shame, too, because we just discovered that we probably have at least one mouse. Ugh.

Beautiful even if it is a work in progress. Actually I saw it in on IG and it looks fabulous. We lost our cat in August. So I will live vicariously through you for now :-) Take Care.