The weather turned nice and the leaves were pretty and the wind wasn't blowing too much one day last week, so four quilts went outside for a photo shoot.  I'll share them shortly, but this post is mostly about finishing up that Hunter's Star project!

I last left you with a pile of blocks, awaiting the design floor... 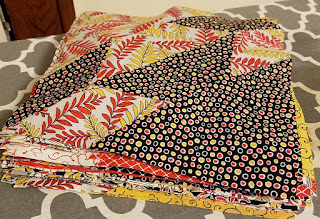 ...waiting because there were more pressing deadlines ahead.  Those project deadlines have been met, so it was time on Sunday afternoon to decide on a layout! 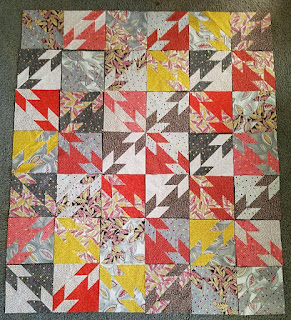 With five colors and five prints, this got a little sticky.  I had two extra blocks and consulted via photo texting with a friend, and finally we decided this layout was good enough... 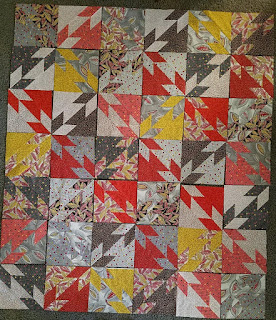 ...each block being relocated resulted in a cascade of movement.  Getting the yellows evenly distributed took some time, as well as getting everyone happy in general.  It could probably have gone on for three more days, but... 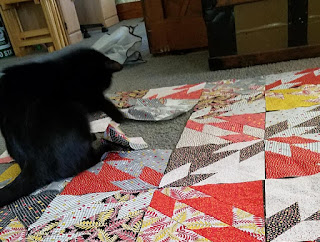 ...my help was less than helpful, so it needed to be moved along to the next stage.

I sewed and sewed.  Trying my best to match points and corners.  But let me tell you - this pattern, at least not the pattern I used and the method of construction, is not for the faint of heart.  There are a number of lost points, but some puckers to make up for them!  Since this will end up a charity quilt, not a showpiece, I'm okay with that and kept sewing.

I took no in-progress shots, I was so focused on sewing.  I wanted it together.  I wanted to get it done before I talked myself into being so frustrated I would stop.  And so I kept going and sewed on borders and all before I stopped.

The borders lie flat.  Thanks to some bias edges (a necessity for this pattern and my method of construction), and easing to make things fit, there are a few A cups in there.  But with some heavy-ish quilting, I'm sure it will be just fine.  The main effort was to get those borders to lie flat.  All the rest will work itself out.

Want to see it? 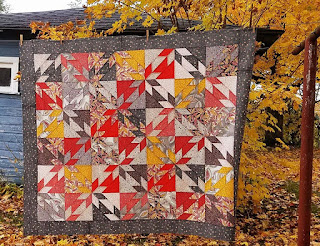 This was not among the four that went out for a photo shoot.  This one went out yesterday.  It started out as a beautiful, sunny day.  By late afternoon, when I was done fighting with this, it had turned grey and dreary.  I edited the photo as much as I could to try to capture the colors correctly, but I still feel it lacks something.  Hopefully I will have a better day to take the final - after quilting - photo later!

And while I was on a roll, why not piece the back?  I had a bit more than a yard of the border fabric left as well as another yard of fabric from the set and that was almost enough for the back.  I just needed one more chunk...to the stash! 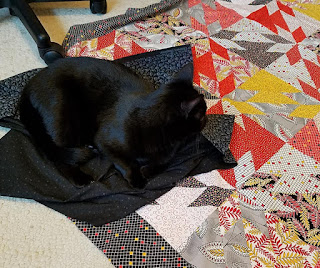 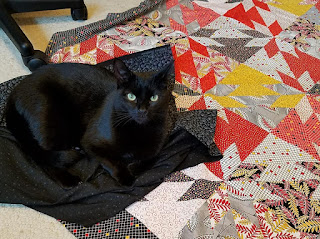 He was pretty grumpy soon after this photo because I made him move.  It's rather hard to sew fabrics together with a cat sitting on them.  Particularly when the fabric and cat are on the floor and the sewing machine is not.  I guess I could have moved the sewing machine...

So the back is sewn and ready to go, too.  And I used up almost all of the fabric my mom gave me.  There are a few small pieces left that can go into the stash and two leftover blocks, but I'm pretty pleased that the majority of this never made it past the shelf of projects!

And I promised to show you what I did to the Hunter's Star ruler... 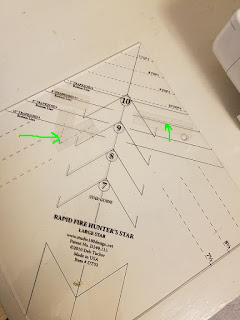 ...it looks blurry here, but only because the shadow of the lines on the front of the ruler are showing up on the table under the ruler.

Anyways, the book/pattern I used called for templates.  And the ruler had instructions that intimidated me.  So I chose to place clear tape on the ruler, carefully place the ruler over the templates in the book, and draw lines on my ruler telling me where to cut the pieces.  Since it was hard to see, I drew some shoddy green arrows pointing to the tape and places I marked.  It worked quite well and was much faster and probably more accurate than actual templates.  I just had to pay extra attention that I was cutting along the right markings.

Also, after the first round of marks nearly wore off, I redrew them and put a second piece of tape over the first and that not only preserved the marks, but seemed to darken them!  And when I'm done?  Peel that tape off and no one will be the wiser.

I already have a plan how to quilt this, but since there are a few others that have deadlines that are looming closer and closer (yikes!), it will have to wait again.

So what did the good-weather photo shoot capture? 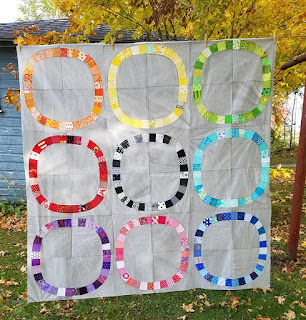 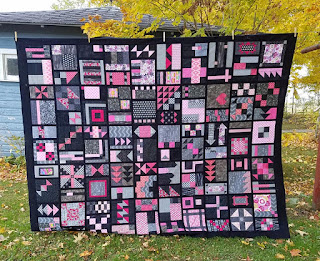 Yep.  All sewn together.  This was a major project for quite a few days and I had black lint on everything and black strings (that Kona ravels badly!) all over the floor.  I moved the sewing table and everything this afternoon to suck it all up because it was gross! 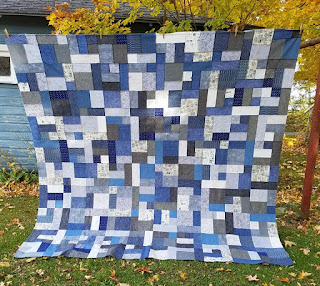 At 90x90, this is a big one and my clothesline is obviously not tall enough.  That's okay, though, because if it WAS tall enough, I wouldn't be! 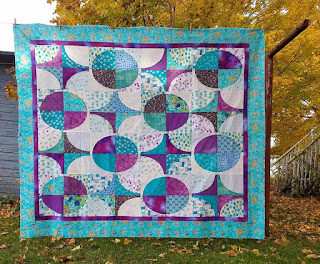 These last two need to be completed soon, but I don't have backs for them.  I was going to try to coordinate with folks to purchase them together, but my mom is coming tomorrow and if we end up in a quilt shop, it may happen without them.  I want to get these done soon because binding also takes time and I'm getting a little antsy!  (Also, how am I going to quilt Adrian's quilt?!)

So I am down to just one quilt-along right now.  Another starts the first of November, but I think I'm going to reel myself in for any future group projects of this type.  This was fun, but I think I got in a little over my head.  I kept up, but it was stressful some days.  I'm already contemplating some ideas for goals for 2020, but haven't solidified anything yet.  I have time.  And if I end up setting no quilty goals, that's okay too.  I have no doubt projects will find me.

And a sad note.  Skitter went back to the vet last week Thursday and was still doing poorly.  She had better days, but her color was still off and she was still eating very little.  She acted like she was in pain and was very weak.  It was time to say goodbye.  We had an extra week with her that I didn't expect when she went in the week before, which was nice, if not stressful.  She is in a better place, no longer in pain and I hope no longer so afraid of everything.  It took her so long to be comfortable here (and I'm still not sure she ever felt completely safe, despite all our efforts), I just hope whatever the afterlife is for her is stress-free.  The remaining two kitties, Freddie and Gabby, seem to have noticed her absence less, and are continuing slowly to bond.  Last night they woke me up in the middle of the night growling over a mouse.  Gabby had it, Freddie wanted it.  I'm not sure who caught and killed it, but thankfully by the time I intervened, it was dead, making the gross task of disposing of the carcass much easier!  I'm also thankful to have two good mousers!  (And chipmunkers and molers and fly-chasers!  Next time we have a bat in the house, that will get evaluated - the last time we had one, deaf Lexie helped me find it while Gabby watched us...)

Time to go finish tidying the house and set up an extra table for my mom to sew with me tomorrow!

Oh, Katie - I'm so sorry to hear about Skitter - it's so hard to lose a fur baby - I hope her afterlife is stress-free, too.

The other four turned out really well. I'm looking forward to seeing how you decide to quilt Adrian's quilt with all of those curved blocks.

LOVE Adrian's quilt and really like Jordan's... like the others, too, but these are my favorites for the day. :)
Have fun with you mom tomorrow.

Your Hunter's Star turned out really beautiful! I've always wanted to make one, but never have. I'm amazed at how all those 100 blocks went together! That's really pretty too. Adrian's quilt is a beauty too. She will love it! The other two are very nice too. You have really been busy! Sorry to hear the sad news about your kitty, but you made the right decision. It's no good to watch them suffer. Take a break a day or two, okay? ---"Love"

I love your Hunter's star! and the pink/black quilt is awesome!! Everything is amazing. So sorry to hear about Skitter, but she had a good life with you while it lasted and you were a good Mommy to her as you are to all your furry friends.

The design of the Hunter's star quilt is so interesting! I like how the block design goes together to make the stars. It looks great and makes a great fall quilt. I love the colors in Single Girl, a fun quilt! 100 blocks is done and it looks great, I like the pinks in with the black and gray. Jordan's quilt is huge and it looks good too! Adrian's quilt is really fun, love the colors. Lots of quilting is ahead!

I'm so sorry to hear Skitter passed. She had a good life with you. Hope Freddie and Gabby are adjusting and they will keep you entertained. Hope you have some more productive sewing time ahead!

Adrian's quilt is oh so handsome and the Single Girl is so attractive that I am sure she is beating off men with a stick :-p But the star of this post is the Hunter Star. PERFECT colors matching the gorgeous fall colors. One day when I grow up I will make a Hunter star Quilt.
I would also talk about Kinship but I need to examine every block closely and that is absolutely necessary because there are a 100 things to see, literally :-D
Enjoy the time with your mom. I just got back from seeing mine and I miss her already.