While I don't have photos of everything, and I have not been in my sewing room as much the past week as some others, progress has been made!

The Hunter's Star from my last post has been put on hold for a bit.

The 100 blocks have begun to get their sashing.  I filled my iron with water, telling myself I would sew until it ran out of steam - literally!  And I managed to get sashings between 6 rows of blocks.  That was further than I expected (and more than I honestly wanted to do), so I just have 4 more rows of short sashings and then the long seams begin.  No photos yet...sorry!

What I do have photos of are the next two blocks from the Little Miss Sawtooth quilt-along. 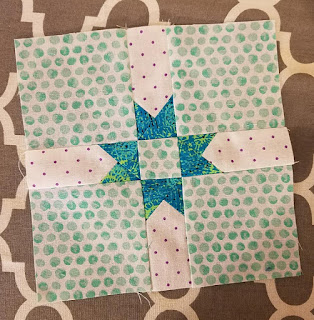 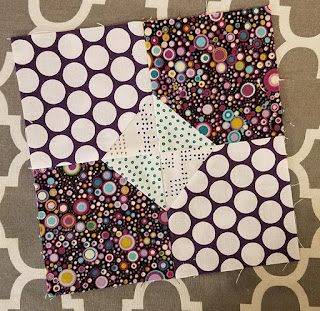 ...and then the whole blocks! 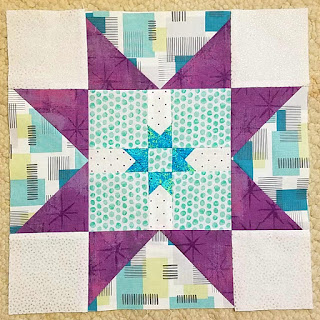 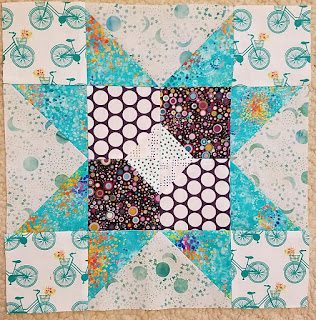 I love how they really come to life with the star points.  The Luciana block in particular seems a little dull until it gets the bright blue star points and some fun bicycles!

I've also been working hard on finishing up the Single Girl circles. 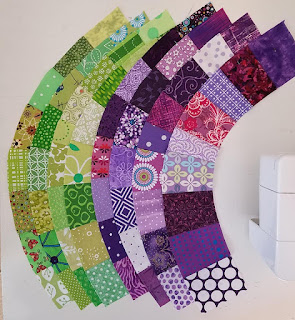 Purple is my favorite color, but I really had to struggle to get every piece in these arcs to be different!  It's just not a color I often choose when making quilts for others (where the stash mostly comes from), but perhaps I need to work to change that?!

I was not particularly motivated to work on these, but last Wednesday I was snuggling Skitter (the old kitty who rarely appears in photos because she is, well, skittish!) and realized her skin was yellow.  My vet could not get her in, but another in town could see her that afternoon, so I've been worried about her a lot.  She had not been eating well (or much at all) for a few days, but there are crunchies out all the time and often leftovers from meals on plates that get nibbled on throughout the day, so I wasn't too worried.  Bloodwork revealed her liver is in distress, so she has been put on meds for that and I was told to feed her anything she will eat, as the lack of food may be causing the trouble.  I have bought some of the packets that are "soup" and she seems to be somewhat interested in those, though any that have chunks, she will still just lick up the liquid and leave the tidbits for someone else.  (A treat the other cats willingly help themselves to if I'm not there to tell them she needs to finish her portion first!)  She is improving slowly, but at 16, I worry about her a lot.  We have lost 3 older cats in the last year and this may be a fourth in just a single calendar year.  So, since these were on deck the day I found her to be distinctly yellow, you can imagine why they were put off some.

But.  I know sitting, worrying about a cat that doesn't want to snuggle (she has come to me in the last few days, asking for snuggles, so I know that means things are improving) is not going to do anyone any good.  So I've dragged myself (oh, the horror!) into my sewing room and worked on turning the arcs into rings... 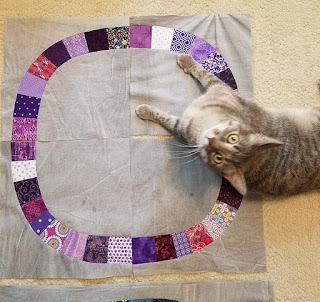 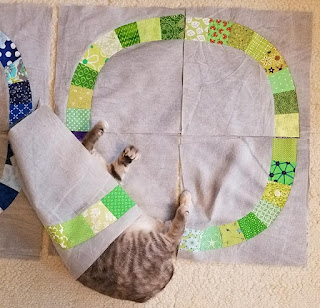 (It always seems this quarters-to-rings step takes the longest.  I couldn't figure out why and then looked at my photos...yeah...I think I've figured this out.  You can't let her do this and NOT stop to pet her a bunch, right?  Or rather, try to pet her and hope she doesn't snag you with her razor-sharp claws while she is playing with you and you end up with 14 bandaids on your hands!)

Once the rings were all sewn, it was time to head to the design floor... 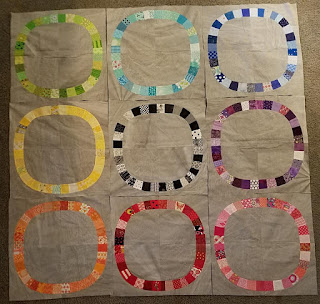 Yes, I think this rainbow-order layout will do just fine.  (Even if it was dark and dreary in the house when I took the photo...)  And do not be fooled - this layout happened with some cat assistance.  He was just too quick to get a good photo. 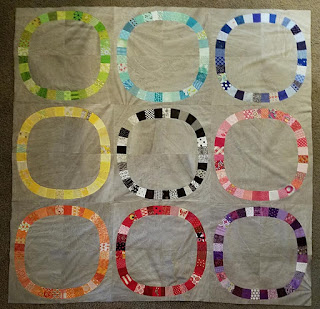 And somehow, in that single flight of stairs, manage to mess up the order of blocks.

But those are large blocks (23" I think) and I'm just not interested in ripping that out and resewing it.  So it will stay this way and I'm okay with it.

It's a top!  It will now wait on the Rack of Shame, as I have three other quilts that have deadlines coming soon.  Two need back fabrics purchased and I need to get my behind in gear about that because it involves shopping with others.

So that's it for my week.  I thought about sewing some tonight, but work today was quite an adventure.  Some new procedures have been put in place and we'll just say that the adjustment period is not going as smoothly as everyone would like.  Kinda what I expected, but kinda sucked the energy out of me, too.  But that's what Netflix is for, right?

Time to get going - eat some dinner and check on the sick kitty again (she goes back to the vet Thursday for a recheck) and decide for sure what the rest of my evening will hold.  It will probably include kitty snuggles, so things are looking up!

The fabrics in those first blocks are beautiful, and indeed the star points make them into spectacular blocks. The circles are pretty too. Hope your kitty gets better soon. ---"Love"

The blocks are very pretty and the circles are very colorful. Great fabrics in all of the projects! Hope Skitter is feeling better.

16 is a good age for a puddy-tat and she has had a great life in your care. Plenty of snuggles when she wants them. Your Sawtooth blocks are fantastic - how good is that aqua/turquoise colour! The Single Girl circles look terrific. Nice work all round. I'm off to start a scrap quilt.