With so many projects going on at once, forward progress is all I aim for each day.  (And generally, with quilting, how often does backwards progress happen?!)

In no particular order of projects, I'll start first with the finish of the 100 blocks!  I'm a few days ahead, but got to the point where it was easier to just keep sewing them and finish than to drag it out any more.  I'm over this project.  100 days is a long time.  And I get it.  That's part of the challenge, but I can tell you I will not easily fall into this trap again. 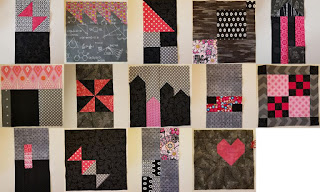 I plan to sash these with a narrow, solid black.  I believe there is a whole-quilt deadline, too, so I'll likely be working on a layout for these in the near future.  But I am very happy to have them all done.  I even cleaned up the project box all the fabrics were hanging out in and put them back in the closet!  (After I cut squares for the Single Girl quilt, of course!)

The Little Miss Sawtooth quilt-along is a little slower paced, with just a couple of blocks to make every two weeks.  Thank goodness!  Due by Thursday night are three blocks, one of which I opted to not make.  (I'll explain in a minute why.)

Remember a few weeks ago, I made a whole ton of flying geese for this project?  Well, they are star points.  I knew that (and probably told you that), but now the fun is making centers for those points! 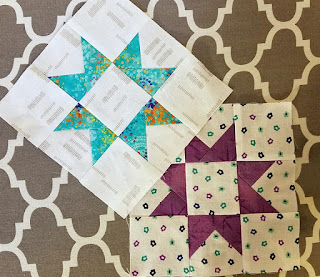 I chose two sets of outer points and then worked from there to choose fabrics for these blocks.  Two of the block "Josephine." 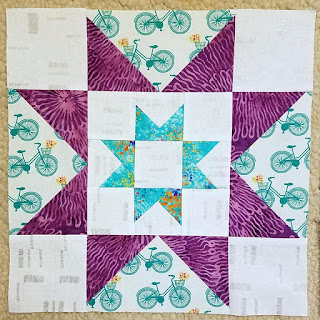 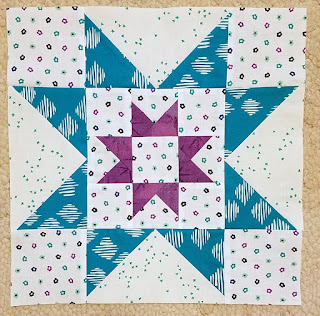 And just one of the block "Sadie". 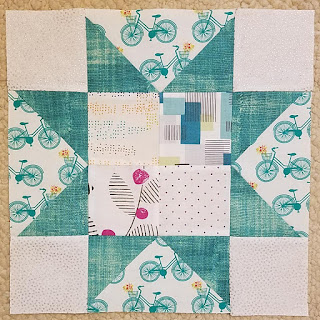 So, you see the blocks for the week are actually block centers.  And the third block (name I forgot), is just a solid square of a fabric.  I decided, using my colored chart, to skip that one and instead make an extra of the pieced blocks.  I have noted on my chart which will get two and which will get one, so I should be good when those blocks are assigned.

But I did work ahead on this project.  The alternate blocks are large 4-patches.  Made of 6" squares.  And with my dwindling stash of lights for this project (supplemented nicely with a recent shopping trip!), I decided that cutting the large pieces first would make a whole lot more sense than hoping to have enough at the end.

I matched them up in foursies and have started sewing some of them, leader-ender style, as I sew the blocks.  These are assigned for the last week of block-making, which will be nice when I get there and am ahead!

Next up, because it has a deadline that I really don't want to mess up, I worked on Jordan's quilt.  I have had all the blocks made for a little while, but needed to find time to lay them all out and get everybody in a happy place. 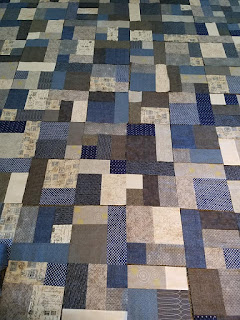 This is just a quick shot of the middle, taken after crawling around on the floor for a while, and sent to the cousin for a final check.  She loves it.  I think it looks kinda drab and masculine, but it's what she asked for and if she thinks it's right, it's right!

I picked it all up with labels and proceeded to sew like a madwoman, paying attention and being careful to make sure I selected the right block from the correct pile and keeping it orientated correctly and pressing in the direction that would make later construction go well.  Until the last two rows.  Apparently I got cocky and all of a sudden I had 2 blocks in one pile and 4 in the other.  A little unsewing happened and there are a few fabrics touching each other that weren't before, but it's nothing life-threatening, so I left it. 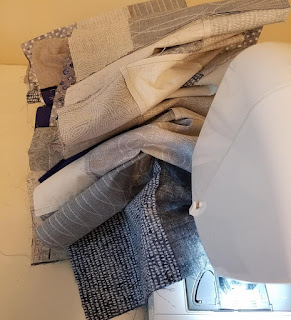 After I had rows assembled, I started sewing them to each other.  In case you want to see what 100 9" blocks looks like mashed behind a sewing machine - here you go.  It was getting sketchy at this point, but since the next step removed 40 of them, all was well.

And the kitties were really well-behaved.  Only a little design floor help and they ignored me through the construction entirely.

Until I was trying to pin 6 rows to 4 rows.  The dreaded last seam. 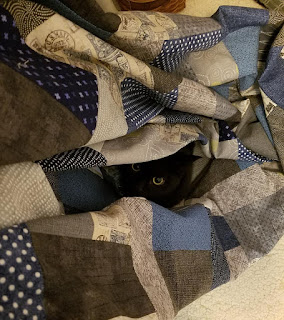 He burrowed right in and proceeded to try to take a nap.  He was not happy with me ousting him, but I was not going to stop there.  I was too close!  But I even kept going and cut, sewed and pressed binding!  Now I just want to go shopping with the cousin to select a fabric for the back.  She trusted me with the front (which I'm glad for - you all know how explaining scale and saturation and all that to a non-quilter goes!), but the back can be anything and I'd like her to have a hand in that choice.

It feels like there hasn't been as much sewing lately, despite all of these projects.  Or maybe just the top-finishing that has led to fewer boxes of projects hanging around makes it feel like less?

Nevertheless, I have kept busy.  I have been toying with rearranging the side of the room opposite the sewing table, but was struggling with how to do it and keep all I have.  I wanted it to be homier feeling, but finally relented with this: 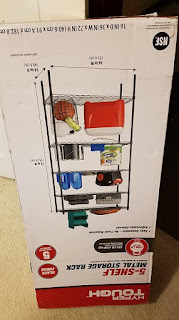 Yeah, it's upside down here, but it's just the box.  (I promise I put the shelving unit in right-side-up!)  I decided this would be a good option and I could keep the lowest shelf up higher to allow kitten clearance and the furnace register to do its thing, too. 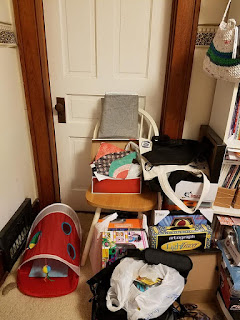 This is the area where it is supposed to go.  That door goes into another bedroom - a bedroom with another door about 3 feet away that opens into the hallway.  And on the other side of this door, there is a couch.  So it is not opening any time soon.  So a shelving unit there will not be a problem.

I wish I had widened the shot, but at the time, I had no idea what would come of this. 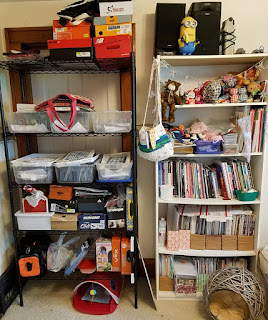 The lowest shelf is Christmas and birthday gifts.  They all end up stashed up here (easy to hide when the kids come over!) and in a big, messy pile that takes over most of my floor.  I'm hoping the shelf will help with some of that.  (I'm sure it will get worse before the holiday gets here!)  And the bookshelf next to it got some more attention, but that second shelf from the top...I dread sorting that mess out!  But it's a start.

And it snowballed from here.  You can kinda see the edge of the ottoman from a chair on the photo edge on the right, right?  Well, that was on an angle, but I decided to set it straight.  And then I decided the leopard print wallpaper border (visible most in the "before" photo of where the shelf goes) had to go.  At least in that corner.  And then I decided to hang some of my mini quilts in that corner.  Because, after living here like 17 years, perhaps it's time to CLAIM my sewing room?

But I got carried away really fast - first googling how to remove that wallpaper border, then googling how to temporarily hang those mini quilts without putting holes in the (impermeable-to-nails) actual plaster wall and then doing all the things.  Before I knew it, I was sweating and done and had taken zero photos. 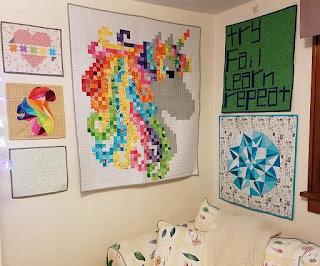 I think I vacuumed an entire cat worth of fur from that chair.  The cats love it and previously I had just put a blanket over it to contain some of it.  But with this new setup, I have decided the afghan my grandma crocheted needs to be out and I will do a better job of keeping the chair de-furred.  And perhaps in use.  (Because the before had project boxes all over the ottoman, so as to be unusable for anyone but the cats to have something to dump on the floor.  Those boxes are now on shelves.  And I promised myself they will return to shelves every night.)

Freddie and Gabby take turns with the new setup.  (The first day, Gabby would walk in, give me the side-eye and walk back out.  Now she likes it.) 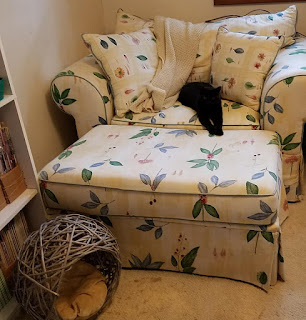 And Freddie loves the afghan.  He comes in, kneads it up some, and crashes while I sew.  Gabby is still a little irked that it is no longer on the diagonal, making a fun little hidey spot in the corner, but I also removed all the junk stored under the chair and ottoman, so she has a good, tidy hiding spot there instead.  (She may also be angry that I removed the mostly-shredded pad of newsprint that she enjoyed destroying while hiding under said ottoman...)

I have plans to do the other side of the room as well as the closets, but that is going to be a big project and probably a fabric-purging one too, so I'm putting that off until probably after the holidays.  Or at least until some of these quilt alongs and projects with actual deadlines are done.  Also, it's so tidy in there, I don't even want to sew and mess it up!  (Even if there still is ugly leopard-print wallpaper border over there!)

But I have been sewing.  Obviously.  I finished the 100 blocks and started on a few more arcs for the Single Girl quilt.  No photos of the arcs, but they're in the very early stages and waiting patiently for me to return from my list of non-sewing chores today.

Did I wear you out?  Remember I did this over the course of a week, so it's really not that bad.  I even took Saturday off!

Ok, now I know why you sent me the pic of the little quilts hanging on the wall. We were talking about something else and I didn't get around to asking. The room is looking great... and comfy. I haven't done anything since Sunday - I've been waiting to find out the RSC color for Oct... then, I'll have to figure out what I might need more of in order to make the quilt large enough.

You have been busy for sure! Cleaning and rearranging closets and shelves is a pain! If anyone knows that, it's me for sure after cleaning closets here at the first of 2019! Now I need to do it again, come 2020! But I probably won't! I've enjoyed seeing your progress on your projects, and look forward to some finishes on those. Don't work too hard! ---"Love"

It always feels good when one gets things organized. I haven't done that for quite a while and don't plan to do it anytime soon. The chair looks so cozy. I think if I sat in it to read I would fall asleep quite soon! Congrats on finishing the 100 blocks! Can't wait to see them put together.

Yeah! The 100 blocks are done and I look forward to seeing how they go together. All the projects are looking good. You have been busy and the organizing looks great, too. Have fun!

All I’ve achieved is folding a messy pile of fabric offcuts into some neat piles! the pink/blocks are looking good and the thin dashing will work well I think. That bicycle print is really cute and I like those blocks ( I’m a sucker for stars). That’s a terrific quilt and how good is it to tidy up a corner!

The star within a star blocks are beautiful!!! So backward progress usually involves a seam-ripper. Think folds in the backing that was not basted properly. Been there :-(
Jordan's quilt is very masculine - like Dwayne "The Rock" Johnson of quilts :-D