I should have more photos, but I don't.  But I'll share what I do have!

First up, we left early last Wednesday and headed north to Drummond Island.  Remember I didn't get to go earlier this year and, since the hubby has a new boat, he wanted to give that a trial run on a short trip.  Unfortunately, the boat was having work done, so we had to go without it.  But we have friends on the island, so the hubby fished on their boat for a few days.  I worked on the seeds (no photos), but didn't get as much done as I thought I might.  Oh well, the prep I did will last for another day.

We stopped on the way home to a scenic lookout with a LOT of steps.  Unfortunately, the colors are just barely starting to change, so the scenery wasn't as spectacular as it might have been, but I did take a few photos...from well back of the railings because I'm a chicken! 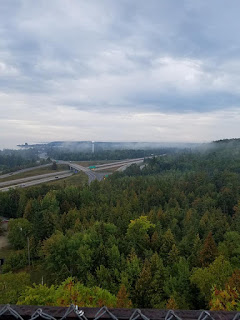 You can kinda see the Mackinac Bridge in this first one.  Tiny, but about dead center. 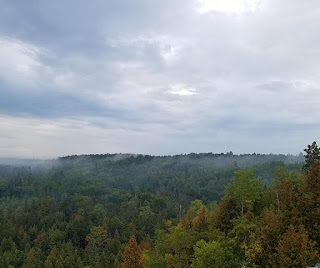 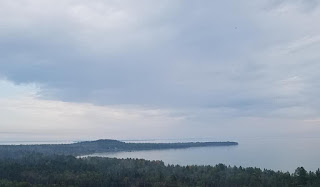 And this foggy parking lot about halfway between home and our destination was kinda fun... 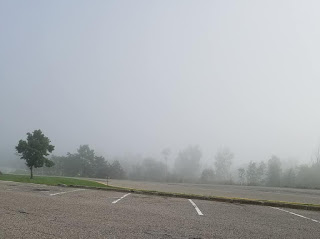 It was crazy high fog.  It wasn't slowing traffic down on the freeways or anything, but just kinda creepy that it was a few feet off the ground where it started.  It lasted probably 30 miles and then it was gone again.

I took no photos on the island (it wasn't great weather - okay for fishing, not great for photo taking).

When I got home, I had one extra block, but I needed to get a few more of the 100 blocks done.  I'm caught up through today and debated doing more when sewing Sunday, but other projects with deadlines were also looming, so here are just three more - 84-86.

Only 14 more to go.  Depending on how things go in the coming days, I might just power through them all.

Next up on the list was the Free-Wheeling Single Girl Quilt Along. My pattern arrived in time for the second step, which was actually starting to sew.  The first step was a fabric pull and I knew I could at least get a start on that without the pattern that was lost in the mail and being reset. 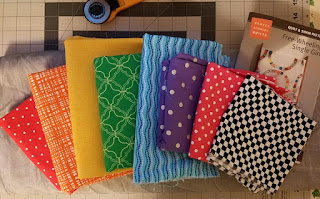 I decided to do nine circles, one in each color, though I'm debating about doing royal blue and turquoise because this only represents 8 circles.  And that doesn't make a very good 3x3 layout.  So I'm in limbo there for now and will have to pull my fabrics out and see what I can do.

In the meantime, despite the requirement for the week being make one set of arcs for one circle, I will be making a larger quilt than the four-ring quilt-along version, so I knew I needed to up my game.  This is a scary pattern for me, but I decided procrastinating wasn't going to do me any good, so I pulled out my oranges and started sorting, hoping I would have enough to not repeat the fabrics.  Well.  I have more orange than I thought... 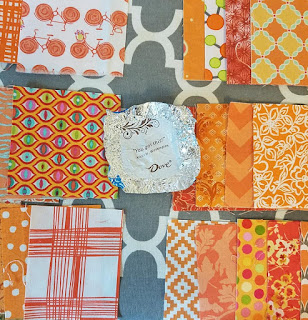 I separated them into piles so I would have a good distribution of color and opened a chocolate to fortify my courage.  Maybe you can't read it, but it said "You've got this" inside.  I think they knew!

It went very fast and I was happy with my results.  A little bit of a learning curve to figure out how to place each piece so it went the right direction of the arc, but I made it.  And got faster, too! 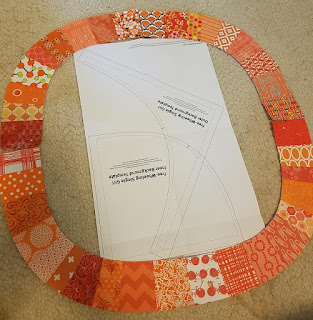 I'm very happy with this one!

And while I had the stuff out and my courage up and had the system working, I might as well do yellow, too, right? 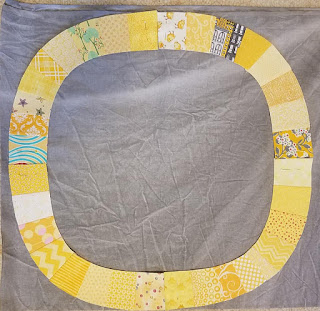 The grey will be the background.  I think.  It's the overdyed muslin again and I'm a little concerned it will look odd because the rings are actually pieced as quarters and then sewn together.  That may look odd.  I'll have to cut some pieces and lay it out and make a decision.  But next week, the requirement is to sew one set of arcs into the background and make a full circle.  And since there are tips and tricks given with each new step, I'm going to hold off for that.

But, while the creative juices are flowing, why not do red, too?

My reds are sadly lacking.  Due to my crazy hearts in stars quilt made for Project Quilting, my brighter reds were much depleted.  And it's not a favorite color, so it's not one I lean towards when making quilts or building my stash.  But I found enough and it's not as bright as it might be, but I think it will do just fine. 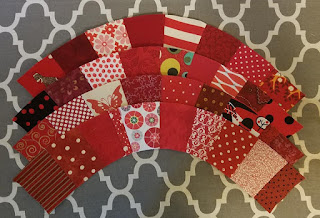 I got lazy and didn't lay them all out and take a photo that way, but you get the idea. 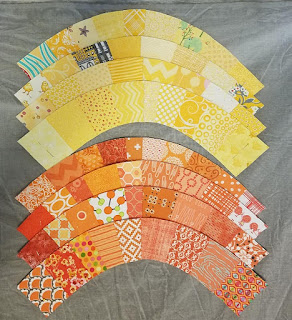 And there are the other parts.

At this point, I had about 30 minutes until I had to start dinner and decided to tidy up my mess and switch gears.  But this is plenty enough for this week and a little extra for next week (which will probably be a good thing since I have to sew them all into backgrounds AND would have had to make two sets of arcs).

Sunday I made a trip to pick up a few more lighter fabrics for background for the Little Miss Sawtooth quilt along.  I have no photos, but I realized that one is going to take a lot of lights and I wasn't sure I would make it.  And adding them later is harder than mixing them in from the start.  Or near the start.  This quilt along has two-week intervals, but the next step started Sunday.  So I'll be making at least 3 blocks for this step - probably more, because, as always, I'm making it bigger and need more blocks.  There are 15 blocks and I need 18 full blocks and 6 half-blocks.  I think as I go, I will choose the ones I like better to make extras.  And those that can be easily halved (some are 3-patch, some 4-patch...) will probably be done as I go, too.  There are also a lot of large 4-patch (2x2) blocks that are the alternate blocks, so I'm debating working on those as I go for an earlier finish.  (Maybe I could have it done by Christmas?!)  But no photos.  Again.

I DID take a photo of these... 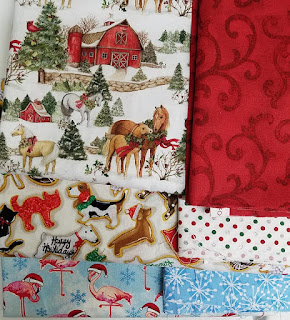 Every year for quite a few years now, I have made pillowcases for each of the three nieces on my side of the family.  Usually I don't think about getting the fabrics until the selection is picked over.  But the middle one with the animal cookies caught my eye and I decided to get them already.  And that flamingo print?  I absolutely love it. I debated buying a bigger chunk and using it for a quilt back at some point.  But I was already spending a lot on everything else (two rolls of batting also came home with me!), so I decided it was a bad choice for a "someday" project.

Jordan's quilt has seen progress.  Before we left for vacation, all the blocks (100!) were completed, but those have been tucked away for a bit, awaiting the projects with sooner deadlines to get their time.  I hope to have time later this week to lay them out and start sewing them together, though.  Then I'll try to schedule a time to go with the cousin to pick a back for the quilt.  I tend to go wilder, but I'm not sure what she will think is good for her daughter, so we'll see.

And tiny stars have been happening, too, as leader-ender sewing for the 100 blocks.  I'm not sure how those will progress once that project ends, but for now I'm making good progress!  But since it's a forever project, I'm not in a rush.  I mean, I'd like to get it done sooner than later, but there are so many other things going on right now, I need to pace myself.  And perhaps quit deciding to join quilt-alongs?  (Maybe that will be a resolution for next year?!)

That's all the projects for now.  I need to get better again at taking photos, but, well, I get all wrapped up in things and then it's over.

Time to go make myself some dinner and decide what else to do tonight...

I just don't understand how you do it! Every paragraph (after the beautiful pictures of your trip) talked about a different project! Here I've been working on the same monster now for nine months, and it's still not completely finished. I still have make the label and get the hanging sleeve on for the quilt show; hopefully I'll get it all done in time! You'll probably have all yours finished before mine it. ---"Love"

Oh Katie, I am so tempted to join in. I have been eyeing this pattern for a while. In fact, I tried to paper-piece a few arcs. And then other things happened. I don't wish to spend $45 on the acrylic templates.
Your beautiful curves (:-D) are really enticing :-) How many blocks will you make? Do you need more reds? I could send a few your way.

One thought for your 9th ring, what about mixing all the colors and putting it in the middle? As always thank you for sharing!

So much to catch up on. Your ring circles look great so far. So the grey fabric is pieced rather than the ring appliqued? The pillowcases are a terrific idea. Cute fabrics too.