I thought about squeezing in a 2018 recap post, but it never happened.  And now it's January.  Maybe another day...

So I guess I'll just share with you my retreat fun and how I've started off 2019!

I am very thankful I worked so hard earlier to prep for retreat.  Cutting "kits" for projects really made a difference when I had little time to pack.  But I managed to remember everything I needed!  I didn't need to borrow a single thing.  Then again, I mostly worked on one project... 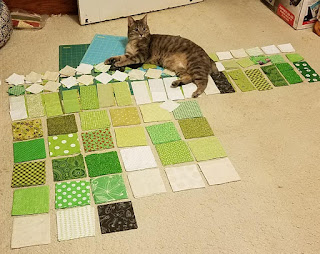 This was project number one at retreat.  I probably should have been working on the graduation quilt, but after seeing where we were sitting and the amount of (or lack of) floor space, I opted for something that did not require to be entirely layed out before I could sew.

So green X Plus blocks it is!  (Plus I was only mildly excited to start these...) 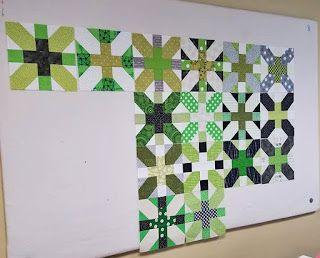 The blocks took longer than I anticipated.  Of course, there were a lot of long pauses in sewing for conversation...  I was sitting at a pod of 7 tables, so there were 6 other ladies there with me!

But by the end of day two (day one being arrival day and only about a half day once all was set up and moved in), I had the entire design wall you see above filled with blocks... 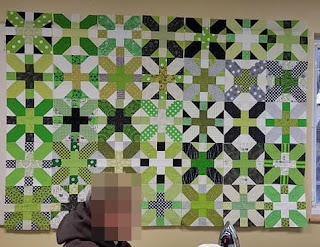 Sorry Colette for blurring you out, but you didn't tell me I could put your face here, so you're just a funky blob.  But you can see all 35 (well, most of them) here.  I need/cut 49, so I decided to just keep sewing.  I knew I could get all of them done before I had to leave.

It looked pretty green in person, but seeing it through the lens of a camera, it looks less green.  And with an additional bunch of blocks, I'm sure it will be just fine.  The layout is yet to be determined, so that will make some differences too.  (Right now there are a number that have the same fabrics next to each other - different parts of the block, but same fabric...and with about 38 different greens alone, that should not be happening!)

I did finish them all! 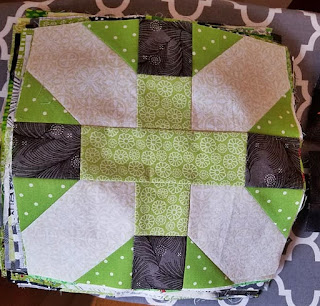 This is just the pile after returning home, but I finished!  Of course, I still have to figure out the layout and sew the dreaded long seams, but I'm pretty excited!

After this, I still had a few hours left before it was time to pack up.  Yep, just a few hours.

So I pulled out my bag of about 150 fabrics for tiny stars and dug into that project... 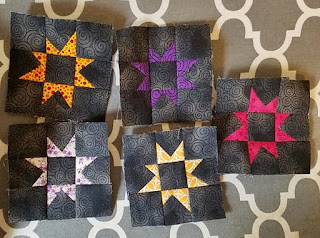 But that's okay.  This is five more that I don't have to make later.

I didn't take many photos of projects others were working on.  In part because I forgot.  But also because I didn't even know who was making what (design walls were everywhere!) and wasn't comfortable asking everyone if I could share their projects on my blog...

But I did take a few photos of what friends were working on...

Colette, of the blur above, finished this top for her second project: 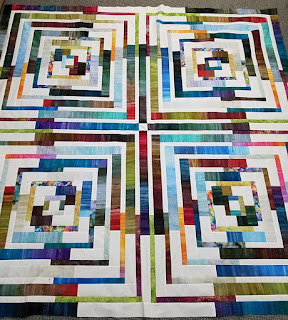 It's called Antelope Canyon and gave her a few fits.  She didn't have to rip out much (if anything?), but she had cut and labelled obsessively the weeks before camp and I heard her mumbling to herself a LOT during construction.  She also finished a bunch of blocks for another project, but because I was hogging the design wall, they didn't get displayed.  Oops!

And my sister-in-law was working on these guys:

Not the best photo, but last Christmas (2017), I gave her the Awesome Ocean quilt kit.  She's slowly plugging away at it, but any of you who have done patterns by this designer know they're very involved.  So she also sewed a bunch of other, simpler, projects during the weekend.  And some of them had a short display on the design wall, but I was too busy sewing, gabbing and eating to remember to snap any photos.

In addition to sewing, gabbing and eating, I made a trip to a nearby quilt shop.  And I was bad...

Remember how I said no more precuts without a purpose?  Well...I bought a bundle, but they were so doggone cute.  I'll figure something out.

The other fat quarters were free.  5 free fat quarters for the new year.  None of them are anything I'm super excited about, but they'll get used somewhere.

And the pattern was 15% off.  It's been on my Pinterest board for a while, but having the actual pattern will be better inspiration.

Have you noticed they're all sitting on a bolt of fabric?  No?  Well, they are.  At $7.50 a yard, plus 15% off, this overdyed muslin was a MUST.  And why not just get it all?  I have a desire to make a few scrappier quilts this year, but the background is always a bother.  I like to have my scrappy quilts a bit more unified than just light vs. dark, so this will be perfect.  And with 8 yards, it should last at least a couple of projects!  I still need to get it washed, as it's quite stiff, but that's a project for another day...I need to finish a few that I've already started for now.

Today I am not working (which surprised me, though I am not complaining), so I am doing laundry and need to run out for a few groceries.  After lunch...I'm not doing well in the getting things done department today.  But my bags are unpacked, my sewing room set back up (mostly) and the last load of laundry is in the washer, so I'm getting there.

I'm considering ideas right now for the Project Quilting challenge.  Have any of you heard of this?  It's pretty cool and inspired by Project Runway.  This year I am not participating in the UFO challenge (I really don't have that many, outside of tops needing quilting), nor am I doing the rainbow scrap challenge (I need a focused project for that and just didn't come up with one this year), so I thought a new challenge might be fun.  And something outside of my usual box feels right.

I am also working on the details (in my head, of course) of a monthly self-challenge.  One of the blogs I enjoy (but can't remember which...), the author had a box with projects written on scraps of paper and drew one each month.  I liked the idea of the UFO challenge, as it guided my squirrels each month.  If I don't have a guide, I will probably have a good year NEXT year for the UFO challenge...  So if I have a jar...  The hold up is what to put in there.  I am thinking ideas like "start a new project from scraps from a Pinterest inspiration" or "longarm something" or even "hang the wall-hanging guild challenge quilts"...and if I finish one challenge, I can just draw another.  I don't necessarily have to do them only monthly.  Once a project is finished, I can move on.  But I have to be careful to not just stall out when I hit a paper I don't much like!  So now that I am home from retreat, work shifts have decreased and it's cold out, I will be working on that jar.  (If you have any suggestions, I welcome them because they can't ALL (or mostly) be "start a new project"!  Well, they could, but that will probably be ugly!)

Time to go feed Emma (she has placed herself between my face and the computer screen, so this post is getting increasingly hard to type) and myself as well.  Because going to the grocery store hungry will break my pocketbook!

over dyed muslin? that sounds interesting - I don't think I've heard of it before at least not commercially. I still say that's a lot of green, but I know you like green ( so do I in smaller amounts lol)... it looks great, though. Can't wait to see it completed. I saw your new pattern and got to wondering what happened to the one that you bought last summer while on retreat ( I think) and when you got home, you saw that I had done the same quilt that weekend. My top is one of those in the pile waiting for backing and batting. I even have a sketch pinned to the top showing how I want to quilt the blocks when I can get to it.
I'm glad you had a good time - and today off to 'recuperate'.

Your green (and grey?) crosses look fabulous and you've achieved so much on retreat. Antelope Canyon is a fine looking quilt almost an art work and your SIL's blocks are pretty cute. I like that pattern and your muslin buy was a bargain. That projects in a jar should suit you very well and you seem to already have a sense of what needs to go on the papers. Why not start with these and as you go along add others that come to mind?

Glad you had fun at the retreat. Just think; you accomplished a lot really! All those green blocks turned out really pretty. You mentioned sewing the long seams. Rather than sewing long seams, why not sew them in four o more sections both ways? That's easier for me than long seams. Just a thought! Sounds you are getting your plan together for 2019; I really haven't. I'm still just muddling around! That's got to change! ---"Love"

You got a lot done at the retreat! That's a lot of blocks and they look great! Colette's project is gorgeous and I can imagine why she was mumbling to herself. I love it! I don't think I'm going to join any challenges, but will go along with Lori's string along 2019 because I have tons of them and want to use them up if possible. I also plan to finish some quilts that I have started. I have 3 quilts ready (or almost ready) for quilting and want to do those soon. Good luck with whatever you decide to do this year.

You accomplished a lot at retreat, even if it was just the one project. It was a huge big chunk of one project! I was not excited by one block, but put them all together and it's a really fun quilt. Did you manage to fill your challenge jar?