It's been a crazy week.  I did make 15 tiny stars last Thursday.  I took no photos...oops!  But I was kinda rushing because I knew Friday I was going to my mom's to raid her stash.  I've pretty much exhausted mine for tiny stars and what's left is pretty much a pain to deal with.  But my mom...oh Lord does she have a stash!  I should have taken a photo of that, too, but she'd probably be embarrassed!  (It's tidy, but a lot!  But she's sewing through it...ha ha ha...we all know how that goes!)

Turns out she is also making tiny stars.  Hers are a little less wonky, but the type that the points aren't close enough to the edge so you don't have to worry about losing them.  And hers are all colors.  Off-white backgrounds from scraps, but for every other part, every color goes.

I cut.  And cut.  And cut.  And cut.  And cut.  We broke for lunch with my dad (trip to Taco Bell!!!), but I was focused.  My book showed a lack of yellow, orange, purple and red.  In about that order.  Purple is hard because many of the darker purples fade into the background.  But I went through one of her boxes (the "sweater" size of the Rubbermaid tubs) each of all four colors. I ran out of tiny baggies, but she had more!  So I cut probably 150 sets of squares.  And a few for her project when I had a tiny piece that was the right size for her. 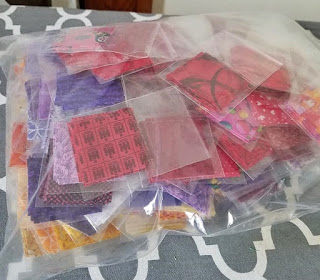 That's not quite a gallon size ziplog bag they're all hanging out in, but holy cow!  (And I giggled as I was cutting the International Harvester fabric...she didn't even know that's what it was...some Iowa girl she is!!!)

I had help, much in the same form as at home, just from my baby sister, not my children... 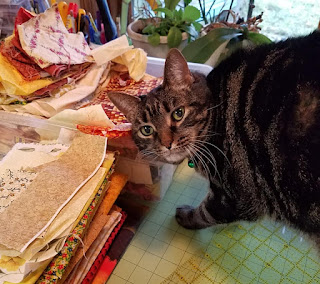 That's Shandy.  I helped rescue her and get her to my mom and dad years ago.  She's a great cat, but hates being kissed on the head.  So guess what I do?  (Well, this time maybe she deserved it because she tracked dirt in from outside all over the cutting mat!)  (And her head is kinda tiny.  Not as bad as this photo makes it look, but she does have a little head.)

It was a super fun day, though my feet were hollering the next day!  My mom does have a squishy mat in front of her cutting table and I am used to standing for hours at my job, but not in just one place!  (Even as a cashier, I do get to run around some helping customers and stuff.)  But that was the last day in a stretch I had off...I worked the next four days in a row.  Some scheduled, some I opened my big mouth and offered to help.  But the more I do that, the harder it is for anyone else to deny me time off or swapping shifts when I need it, right?!

Saturday I worked 10am-6pm.  Though I don't have to get up early, I don't much like this shift.  But it is what it is and I don't get that shift often.

And they did need me.  We had pet photos with Santa (when you work at a store that sells tractor parts and horse feed...you also sell pet food and dogs are welcome to the point where you have treats behind the counter for them!) and that meant a lot more foot (and paw) traffic.  Extra hands were good.

But the boss ALSO scheduled a rescue/foster group to bring in kitties for adoption.  I told her she cannot EVER schedule me to work those days again! 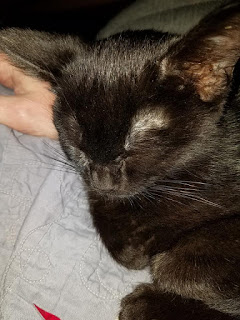 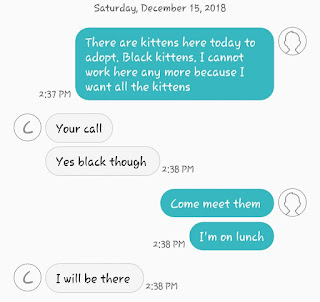 He brought the money, met the cat, filled out the paperwork, brought in the carrier (that he knew enough to at least put in the car) and took the little guy home while I (unwillingly) finished my shift.

I love ALL the cats.

So while we lost Luka about a month and a half ago (he was so sick, it was time...hard, but the right choice), we're quickly back up to 5 cats.

The others had varying reactions.  Skitter and Lexie were like "oh, this again".  Emma hissed defiantly, but pretty much let him be.  Gabby is very angry with me.  She was terrified of him.  But now, just a few days later (and finally a day off work for me), they are doing much better.  Emma still hisses a little, but she's a spoiled princess.  (That I adore.)  And this morning, I caught Gabby playing with him...running through the house.

He's a very people-oriented cat and not very hyper as kittens often are.  The foster human said he had been bottle fed and we met the terror of a 4-year-old he grew up with, so he's pretty chill.  His new sisters hiss and snarl at him and he's like "whatever, I'm playing with this toy right now"...  But we'll see how his personality changes with time.  I think he's about 10 weeks old right now and so tiny, but he's got huge ears and paws, so he's gonna be a big guy when he's done growing.

So between the snuggles and bonding (and efforts to make the other cats sure of their place in the household...not that we'd ever get rid of any, just the hierarchy they've developed), work and making fudge and peanut brittle and such for the hubby to give to his employees...no sewing.

I should be sewing today, but haven't made it there yet.

I should go do that now instead of sitting back down on the couch...cause one cat or another will find me in no time!

Okay, I talked myself into it.  Off to the sewing room...Christmas blocks!!!

PS My mom gave me this fabric.  She has no idea why she had it and says its ugly.  It looks very vintage, but the selvedge says Connecting Threads, so I know it's newer.  But I adore it! 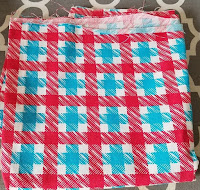 PPS I promise more Freddie photos (well, duh), but mostly he's just sleeping in my lap when I remember and those aren't very interesting...
Posted by Katie at 12:35 PM

Love black kitties too. I'm with you at five cats. Mr Tale passed away ten days before hubby passed. I know they are together in heaven. Hugs.

What a funny cat story! I have always liked black cats too. We used to have 2 cats, but as I said before, no more pets for us. What fun to get to raid your Mom's stash! I haven't been doing much sewing lately, but today I had to sit down and do some mindless stitching. All the baking and cleaning is getting to me. When I'm done I better take a picture of my sewing room because it won't stay clean very long. Our DS#3 is on his way from Kansas and is supposed to arrive with his family on Saturday. Today I made another batch of lefse - a Norwegian potato pancake that we roll up with butter and sugar - yummy!!

Between raiding your Mom's stash and getting a new kitten - you've had a fun week! Looking forward to more photos of your tiny stars and Freddie - ;))

I think Freddie was meant to come into your life. He’s certainly landed on his feet and now has a loving home. I had to chuckle at the text msg exchange. Merry Christmas KatieMay. Your blog posts and wonderful creations are such a treat - I enjoy them very much.

Freddie is so sweet, a new kitty is so much fun! Hope everyone adjusts well and it is a happy kitty family. Sounds like you had fun "shopping" in your Mom's stash. Your tiny stars are all so cute, can't wait to see your new ones. I am trying to make some cookies today, peanut butter with kisses on top. Have a very Merry Christmas and a Happy Healthy New Year!