Back in May, a squirrel visited me.  It's not the only squirrel that's been to my house lately, but it's the one I finished (the top) a few days ago.  Just in time for the DrEAMi! link-up.  How fortunate!

It all started out because my "assignments" for the few challenges I'm participating in were complete.  Way early.  And I woke up one morning and knew what I was going to work on the rest of the month.  (We're not going to talk about the opportunity to work ahead, okay?)

After a quick trip to get background fabric and a deep breath to untie the beautiful bundle of fat quarters, I was ready to start cutting! 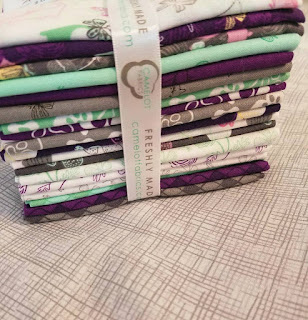 Another deep breath and start cutting.  With this pattern, there is no room for error and I had just enough fabric! 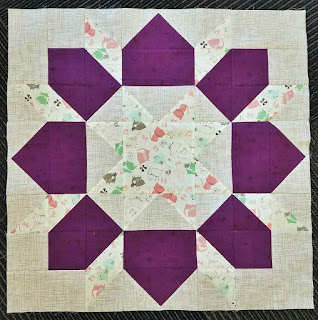 With the first block done, I was ready to start cutting all the blocks and making "kits" for the other fabric combinations.

I worked on it at my guild's monthly weekend sew-in and got a a few blocks done, but there was a lot of cutting - careful, mindful cutting - to be done, so that took a bit.  Plus chatting...and lunch...

Working slowly here and there, by early June I had all the blocks complete. 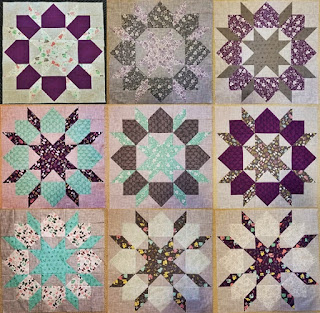 And this photo shows how the same camera in the same room (aside from the first one) can vary shades.  The grey is the same throughout!  But I promised a whole-top shot and you'll get that soon!

Next up were sashings and the dreaded long seams.  This quilt finishes at 84" square, so yikes!

But, since it spilled into June, I had my new monthly "assignments" to work on first.  I completed those just a few days ago and, despite the warmer weather, pushed myself to work on getting these together.  The house is cooler in the morning and if I turn the fan on behind me, blowing at me, it's tolerable.  (But I do try to minimize the time the iron is on!)

Today, I decided to try to get a photo... 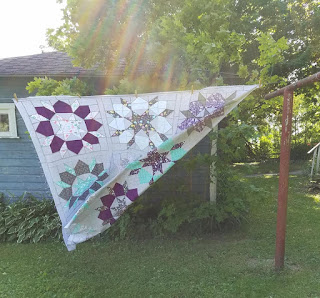 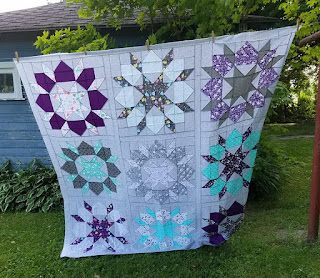 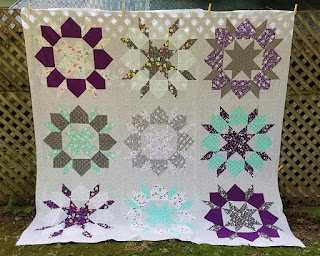 (note the clothespin on the right side towards the bottom? even on the fence, it was blowing pretty wildly!)

But there you have it.  Swoon squirrel is a top!

As I was folding it after the photo shoot, I noticed one of the borders had frayed more than 1/4" in at the corner.  I'll need to remove and replace that section before I quilt it, but it's only about 6 inches, so it shouldn't be too hard.  (Just frustrating, but I suppose I should have known better when it was blowing sideways!)

And then, as I was tidying up, I realized I had squirrel poop.  What is squirrel poop?  Well, it's normally what folks would call "lost corners" from flying geese construction.  But since this project was a squirrel and these bits are leftovers, they're squirrel poop. 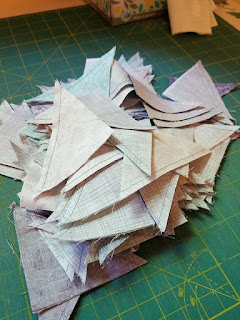 Yesterday I dragged my small ironing board and iron downstairs and set it up closer to the window air conditioning unit.  I started taming the poop. 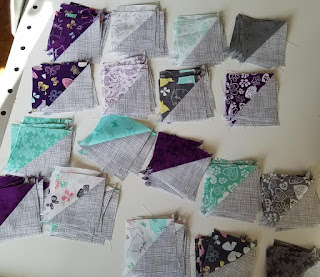 This is as far as I've gotten and today, instead of trimming them to a uniform size, I'm writing this post before I have to head into work.

Tomorrow it's supposed to be a bit cooler and I don't have to work.  It's very tempting to continue to work on these, but I do have my "assignments" for July and should probably focus on those first.  But I do have an idea how to use them, but have to assess what else I have left over for larger chunks.  I do have some, but am not sure how much.  Stay tuned for more updates on the squirrel poop quilt.

I don't have plans to quilt Swoon just yet.  I don't have a backing either.  But I will eventually get it done.  Those fabrics are just too darn cute to let sit around too long (and they already did that in the form of fat quarters for quite a while).  I keep telling myself when the weather cools down I'll quilt a few squirrels.  There are three that I can see from here already...maybe I shouldn't complain about the extra hours the boss is giving me and count that as funds for quilt squirrel backs?!

Happy quilting,
Katie
Posted by Katie at 11:15 AM

Katie, your posts are so much fun to read! The Swoon quilt top is beautiful, it will be fun to see how you quilt it. I love the squirrel poop! That will be a great name for the quilt they will show up in!

Your Swoon quilt is beautiful! Isn't it amazing how value and color placement can make the blocks look entirely different? I love it! You'll find a use for all that squirrel poop too I'm sure. ---"Love"

Hopefully today will be cooler for you... right now, it looks like we could get some more rain and it's already in the 70's :(. Still laughin' about you calling bonus half square triangles 'squirrel poop'. I found some fabric in my stash that I'm going to use some of for charity quilt backing and hopefully get at least a couple of tops sandwiched and quilted before the next guild meeting.

"Squirrel Poop" - LOVE IT!! I'm chasing that Swoon Squirrel right now - and it's all your fault- LOL! And I'm making mine differently so I don't have the same kind of "poop" - but I will definitely be saving it for a "Squirrel Poop" quilt - ;))

Your quilt top look lovely in those beautiful colours!

Those blocks must be way bigger than I thought they were! I LOVE it!!! Very lovely!

I love your squirrel. Those pops of purples are great. As for the squirrel poop - can't wait to see how you finish processing it :) I totally understand the inclination to wait for cooler weather for quilting when you don't have A/C in the longarm room. I wouldn't be anywhere near my sewing machine if I didn't have cool air down there! That said, I suspect we'll see a lot of eye candy here when fall rolls around.

Squirrel poop!!! I love it and I believe you have coined a new term! I have some too from the secret squirrel I had in June. I'm not sure what I'll do, but a cushion cover is what I think I'll make (because I am in SUCH need of more of them...). will watch for what you make! Thanks for linking up your squirrel and its poop!

Wondered when the Swoon bug would bite. That's a gorgeous colour combination. Love the *squirrel poop* - chucjkle - and need to do something with mine.