The heat has finally broken.  It's 64 here this morning as I type.  I have many windows open and am enjoying the cool breezes blowing through my house.  Maybe it won't heat up so much I don't want to turn on the iron today?

Yesterday was enjoyable, also, but because my sister-in-law and her mom invited me to join them to quilt.  My sister-in-law has central air conditioning, so we were able to sew with irons on and still remain comfortable.  (In fact, her basement was so cool, that if I was just sitting around, I'd have been cold!)

What did I accomplish?

Well, instead of working on my monthly assignments (I did take one of them...), I worked on a squirrel and squirrel poop project.

First up on the blog (second up in project order yesterday), I finished the Summer Fun quilt top.  The last row was to be machine appliqued "Summer".  I decided that I would substitute blocks.  Not because I don't do machine applique (which I don't), but because I plan to donate this quilt and thought it would be smarter to choose something that would allow this bright quilt to be given and used any time of the year.

I debated between a row of hearts and a row of friendship stars.  I drew them out on some graph paper to make sure I had the dimensions right (and right in front of me!) and decided on the stars.  No photos of in-progress here, but here's the top! 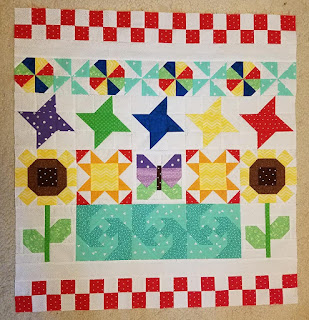 I am thinking of donating this one to Jack's Basket and they request the quilts to be 36" square.  This is a little shy of that, so I'm going to be thinking about how to add a little bit of borders to bring it up a little in size.  I don't think it will be too hard, I just have to decide what to do!

But this was a super fun pattern.  Julie, the woman behind the quilt along, did a wonderful job of writing very detailed instructions that even a beginner could have followed.  I've been doing this a long time, but some of her tips and tricks were helpful to me, too!  I hope she does more quilt alongs!

Oh yes, I also should mention that my sunflowers are not her pattern.  The three options she offered weren't do-able for me, considering my plan for this quilts' future.  So I chose to use the sunflower pattern from Lori Holt's Farm Girl Vintage book.  I think they fit in nicely!

Next up, but first on the list yesterday, is my squirrel poop quilt.  In my last post, I shared with you the completion of my Swoon quilt top - a squirrel project for sure.  But I had a fair amount of leftovers, including a lot of "lost corner" half square triangles.  I knew I needed to use them, but started giggling at myself when I realized they were "squirrel poop" - the leftovers from a squirrel!

I pressed, trimmed and tamed them and cut a few more pieces from the little remaining of the fat quarters I started with.  I modified the original pattern plan to accommodate the lack of enough larger pieces to make the blocks I wanted to make and all was well... 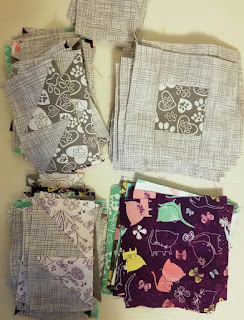 I sewed diligently in my hot sewing room on  Tuesday and Wednesday (between shifts at work), but couldn't bring myself to turn the iron on.  So I showed up at my sister-in-law's house (also house of my brother) with stuff to be ironed and dug in.

Soon I had the blocks together... 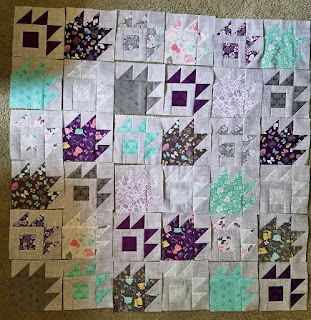 I used their design floor, which does not include help from a cat like mine (they have a cat, but she's still getting used to them, so strangers are an even bigger reason to hide!), so the layout went a little faster and photo ops were much more pleasant...

And then I sewed stuff together! 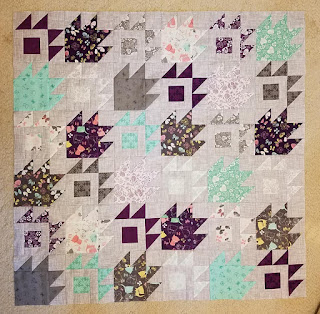 This measures 36" without borders, so it's going to stand as-is and also go to Jack's Basket.

I still have a little bit of fabric left over... 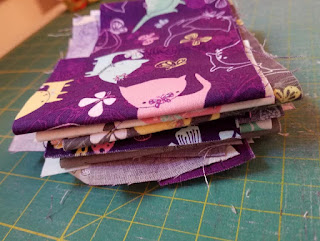 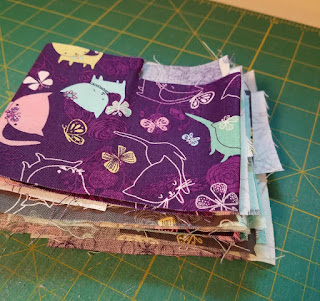 ...but I am going to give it to one lucky blog reader!  I'm done messing with this, but can't bear to throw such cuteness out.  So if anyone out there reading would enjoy working with these scraps, leave a comment telling me so and I'll choose a winner at random on my next day off - Monday.  No other hoops to jump through.  Well, I'll have to have a way to contact you, so make sure if you're a no-reply commenter to leave your email address in the comment...

And with that, I'm off to try to get some sewing done before it gets too hot and before the hubby decides we need to go see the Ant Man movie...I guess at least the theater is air conditioned?

Happy quilting!
Katie
Posted by Katie at 9:18 AM

YES! I would enjoy working/playing with your scraps - I have some "crumb" blocks that could use some cuteness - ;))

I can provide a loving environment for your scraps. I guarantee that they will be happy here. frog2quilt@gmail.com

umm, no thanks on the scraps; I have enough 'squirrel poop' already. LOL

I love your little quilt, so bright and cheerful. Some little on will enjoy it! What a pretty quilt made with scraps, it will be loved by someone, too. Both are great! I will pass on the scraps, I have a ton of my own to use up! Keep cool and have fun!

Both of those projects are really cute! Thanks but no thanks! I have more than enough of my own scraps! I'd rather watch to see what someone else does with them. ---"Love"