Did you all know the new Moda Blockheads series started this week?  Boy did I ALMOST start that.  But decided against it.  Since I'm not sure what the final layout will be, that makes it hard for me to decide on color options - for instance, if I change the background colors, or the placement within blocks, am I going to have bats again?  I mean, I had a quilt with bats on it once because of poor fabric color choices...

Also, I don't need another project.

So I resisted a new squirrel.  It wasn't easy.  I don't think resisting tempation is early in the 12 steps, so maybe I'm doing them out of order, but I probably do have a squirrel problem...  Probably.

Instead, I worked on the stuff I'm supposed to work on!

There was a little internal debate on whether to start the UFO for the month (#6 - also known as the house blocks) or the rainbow scrap challenge blocks (turquoise/aqua/teal).

I decided that, since I had today (Friday) off work, I would attend my guild's sew-in (scheduled a week earlier than originally planned due to a conflict with the multi-purpose room at the library where we sew), and that would be a great place to lay out the house blocks.  Also, the quilt shops are just a few blocks away, facilitating the acquisition of sashing/border material.

So dig out the not-blue, not-green fabrics and make a mess on my cutting table.  Prepare for another round of dreaded Patchwork City blocks.  (I'm on the down slope of making these, so it IS getting a little easier to talk myself into making them.) 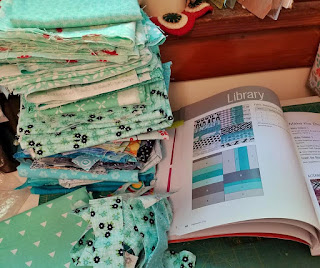 Start sewing.  I had Monday, Wednesday and Friday off this week.  These blocks take about an hour each, so once chores were done, I had a few hours to work before the hubby arrived home from work and I felt I should spend time with him. 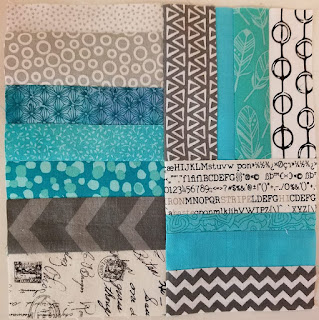 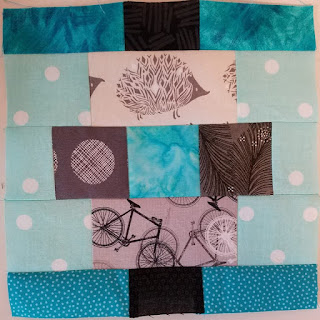 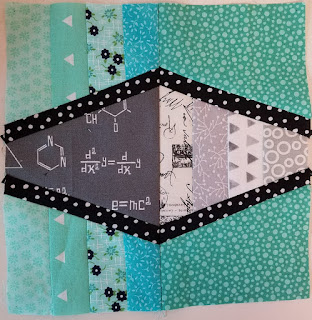 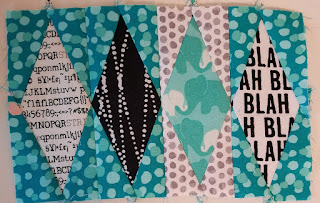 #52
supermarket
(please don't mind the template fail - unlike the others that are just photographer fails, this one is not quite rectangular as it should be)

So four down, five to go.  Not bad.  I work the rest of the weekend, so we'll see where I get.  But I do have a few days off again next week during the week, so other than a little tidying in the areas that I heavily weeded earlier this spring, I should have a fair amount of sewing time.  (Unless I decide to chase another cleaning squirrel...)

Today, at my guild's sew-in, there were few of us there.  One other member actually brought projects and worked on stuff.  My sister-in-law, who is not an actual member, but always welcome, drove down to sew and eat with us.  (That was super awesome!)  A few other members dropped by for one reason or another, but none staying too long.  Except Carol, who didn't bring anything because she "couldn't find her project."  She stayed and chatted for quite a while, which was nice.  (In all honesty, some of us don't get as much done as we would if we stayed home because we spend too much time chatting.  But that's okay.  This is a social thing, too!)

I took my house blocks.  In February of last year, I showed the start of things.  My guild was doing a block exchange.  For each of us participating, we made one in the style we wanted and passed a box.  Each member made a block based on our request.  I requested a house.  Any style, any size, any color.  Anything goes.  Make it your own.  And boy did they.

One member made an outhouse.  He's a little nutty and his wife was embarassed, but it's Bill.  Another member, truly a free spirit, made a free-pieced house.  And yet another, the owner of our local Dairy Queen, made a copy of the new DQ that, at the time, was just in the planning stages, to be opened many months later - her home away from home.

Today seemed like a grand opportunity to lay out the blocks, figure out how to place them (they're all slightly different sizes), and get them sewn together to complete my UFO for the month.  I knew it would be hard without help from the fur-babies, but I did manage. 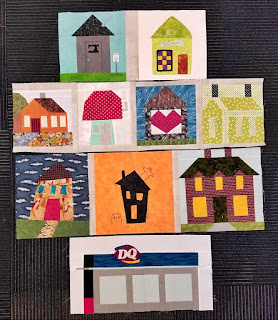 This is what I decided I liked.  And headed to the local quilt shop to get some sashing fabric.  (Okay, okay, maybe some of you caught me.  I forgot to take a truly before photo and a few of these are already sashed...just pretend they aren't, okay?)

While at the quilt shop, making sure I didn't find anything better for the unification of houses, I came across fabric that is perfect for the back, so that jumped into my arms... 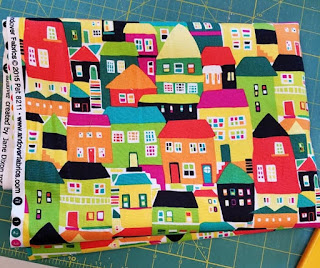 A little busy, but super fun and perfect for me!

I sewed a while longer on the top and finished it up today!!! 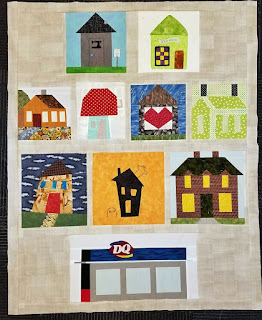 I'll probably bind it in something dark to give it a final "border," but I like it.  It's, um...36-ish inches wide and 50-ish inches tall.  I bought two yards of the backing, so that should be enough, right?

With this done and packed up, I might as well get project #2 out...the swoons!  These blocks finish 24", so again it was a good option to work on a layout without cat helpers.  I'm sure they would have made things better, but you gotta do what you gotta do. 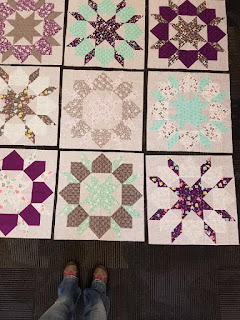 (Also, you can see I'm not good at using my phone to take photographs when my arms are extended as far above my head as I can reach.  But you get the idea.)

I do have the rows sewn together, with sashing.  Also, the sashing between rows is cut to length, but at this point, the one quilter friend left, had tidied up all of her things, so it was time to go.  Her hubby was probably starting to get hungry (so was mine, to be honest) and it was a good stopping point.  But I failed to take a photo of the final stopping point, so you'll just have to imagine more of the grey background fabric between the blocks, okay?

It's been a great day of quilting.  We had a good lunch at the local deli, who serve sandwiches almost as big as your head.  I also caught up on some of the latest member news, as I've missed the last two meetings due to work.  (That's all part of the deal, though, so no pouting.)

The next set of instructions for the squirrel I started earlier this week (the checkerboard strips and "waves" with an undertow current) came out today, but I'll get to those soon enough.  First I want to finish the rainbow blocks and tidy up my cutting area.  All in due time.  I have more days off now than I did before and my commute is 3 minutes instead of 30, so I'm winning.  And earning.  (Got my first paycheck today - nice!)

Time to go finish up some laundry and then head to bed.  I open the store in the morning, so gotta be bright eyed and bushy tailed nice and early!

It was all social for me today. It really was nice to get out of the house and just sit & chat with friends. Hubby was napping in his recliner when I got home, so I don't think he missed me all that much.

You are one busy gal, but you always seem to get all the bases covered! Your houses are very cute, and it sounds like you had a great time quilting with your gang. Just reading about it seemed a though it could have been written about the group I used to quilt with after our guild disbanded. I miss being with the group, but just can't load and unload my machine and drag it up the hill from the parking lot to the building anymore. Hope you get to work on time in the morning! ---"Love"

You have delightful fabrics in the teal family pieces. Words, symbols, drawings!

You have so many fun projects going! I love the Houses quilt!!!

Congrats on the new job with the sweet commute and that awesome backing find for the house quilt!!!

As you I am resisting so very hard, but saving all the pdf instructions, maybe one day...let's see.
Your aqua blocks are terrific.
And you found a perfect houses fabric, it is beautiful.
Happy Scrap Saturday!

I want to live in that neighborhood! And I like the eclectic collection of Patchwork City blocks.

I haven't finished the first set of Moda Block Heads yet so I'm not doing another set. Good for you to almost finish the house quilt and to make the not blue/not green blocks. It will be interesting to see that one put together. I decided to spend some time on a UFO this week. I have had the 156 blocks finished for quite a while and now they are almost all put together for the top. I will need to decide whether or not to put a border around it - it's supposed to be queen size. It's "American Crossroads" from Quilt Sampler, fall/winter 2005. It didn't start it that long ago though it was a few years. I'll post a picture of it soon.

So much quilty goodness at your house! I printed out the instructions and the pattern for Block Heads 2, part 1. I had such fun with BH last year, but I remind myself that I saved the patterns and made them in batches rather than one each week.

Haha - I remember the "bat" quilt! Love your backing for your "house" quilt - and your feet ARE funny - but they give a great perspective on how big those "Swoon" blocks actually are - ;))