Last week I teased you with some fabric purchases for my guild's block exchange.  At that point, I still wasn't sure if I'd get it done in time to participate, but I did.  Even with taking Monday off work for being actually too sick to function - that sinus cold...yikes!

Tuesday, I was feeling a lot better, if not entirely back to myself, so I started sewing.  While half out of it Sunday and Monday, I had some great ideas.  One of them was the details of this house.  Some of the details didn't go as well as I'd hoped, but for the most part, it's here...

We were supposed to choose a quilt we'd like made, provide the pattern and key fabrics and specific instructions.  Well, I sorta bent the rules because I don't want to provide a pattern.  I want the participants to make a house block (any house - you'll see!) that suits them.  In colors that suit them.  In a size that suits them.  So those were my rules.

My first bubble-headed brilliant idea was that this would be a sorority house.  Not just any, but the Sisterhood of Quilters sorority.  Sigma Koppa.  (yes, I made it up)  It, unlike the Greek houses on college campuses does not have many requirement and rules to become a member - just a love of quilting.  But like the campus houses, we make friends that last a lifetime.

So this house had to be made of bricks, right?  Like the old sorority (and fraternity) houses on old college campuses, right?  So I had to buy brick fabric, of course... 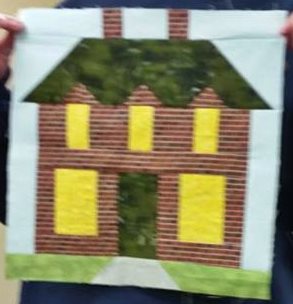 It's a little blurry because, in my excitement to take these Thursday, I forgot to take photos.  As I was sharing my box and story behind the block, one guild member had her 5-year-old grandson there.  He had her phone and was taking photos of everything - this one was one of the worst, but he's 5.  (Cute as a button, though.  And I was amused at how we all stopped and posed for him and didn't hold our quilts over our faces like we do when our peers pull out their cameras!)  You get the idea.

It's from the Vintage Farm Girl book/quilt.  And unlike when I made the whole quilt at 6", this block will finish 12".

But because I want ALL kinds of houses, I wanted to make a second.  Another of my bubble-head ideas - I should make a mushroom house.  And looking at stuff on Pinterest is fairly easy to do, even when you're useless because of a cold! 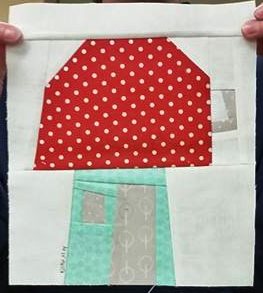 This is a free pattern I found here.  And it's not all that hard, though I've gotten a lot better at paper piecing in the last few years because I keep picking patterns that use it.  (What IS my problem?)

This one is about 8.5" across and, well, maybe 10" tall.  I can trim that top a little to make it whatever size, but I said I wanted whatever size and this illustrates my point that rectangular is good, too.

I made this one on Wednesday and love it so much I didn't want to go to bed or go to work on Thursday so I could stay up and stay home and make a whole quilt of these little houses.  In all sorts of colors.  But I went to bed.  And I went to work.

On Thursday, I tried to use Wonder Under to adhere some Greek letters (a sigma and a koppa, of course) to the sorority house.  Fail.  Maybe I'll get it done after the exchange, but for now it's out of my hands, so it's just as well I don't worry about it.

Instead I have this to worry about: 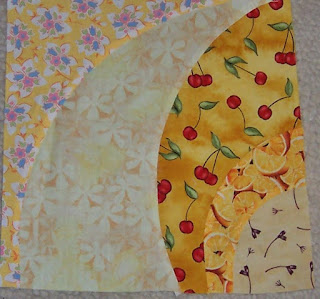 This is my friend Colette's block.

We included a notebook in our boxes.  I think hers might come back with four-letter words.  Not the nice ones.

What IS she thinking?

Actually, what she's thinking is that she wants another quilt like the one she already made, but in different colors.

This block is part of the quilt "Radiant Suns".  (If you scroll down in this link, you can see ones made by other members of my guild - Carol R (who is actually called Carolyn) and Wendy H (photos are next to each other on my screen) - and Colette also made one that is equally busy.)

She wants us to make one block in our favorite color.  Just one.  I suppose that request is an effort at self-preservation?  She might get a brick through her window if she asked for four each!

She included freezer paper templates.  Templates.  But again, their inclusion is probably an attempt at self-preservation.

She promises it isn't hard.

I don't believe her.

She claims she doesn't mind that most of us love purple and she's going to have a very purple quilt.

I haven't done any more with Colette's box than read through her instructions and requests.  I'll probably tackle this this weekend.  In purple, of course.  (If it goes as well as she promises, I might make a yellow and and orange one...and maybe an aqua one in honor of the scrap color of the month, but I'm not holding my breath!)

The up side?  This is probably THE hardest block anyone picked.  And I'll have it done first.  So there's that.

But my blocks were well-received.  A lot of folks went home with ideas churning - even those who aren't participating!  (Maybe I'll get bonus blocks?  The old woman who lived in a shoe was tossed out by a non-participant!)  One gal said she was already going to make her block that weekend, even though she won't get my box officially for months!

In other news, this past weekend was my guild's sewing Saturday and I took my pile of aqua scraps... 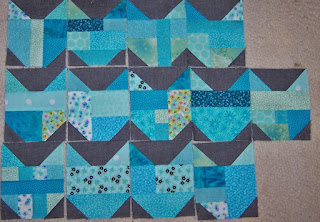 (this photo doesn't show the variety of color nearly as well as the pile of scraps photo...that's what I get for taking nighttime photos...)

I also worked a bit on the Candy Bracelets blocks, but it seems every time I get started on those, something comes up or time runs out...that's okay, though.  It can be a slow project.

Sunday was a bit of a bust for crafty stuff...or even being at home...but it was a gorgeous weekend, so it was better I spent a little of it away from the sewing machine.

So far this week, I've unpacked my sewing stuff further from Saturday's adventure, but that's it.  But it's only Tuesday and Tuesday is usually the busiest, latest, hardest day at work.  (Not always, but I can pretty much count on it being crazy!)  So it's usually downhill from there - maybe I'll come home with energy tomorrow night?

I don't think I'm supposed to share what I'm making for blocks, but I'll save up photos and hope to have a reveal sooner after the exchange is finished (I think there's about 8 of us) than I did with the last one!

Off to snuggle the Emma cat (she's pacing circles around/on my desk as I type) and get some sleep!

I really like the idea for your house quilt. The quilters' sorority house is very clever. I can imagine a cute log cabin in the woods or maybe a beach house or an igloo or ... I'm sure everyone will have fun with it. My recent second knee surgery means no sewing for the next while. Too bad!

Sinus colds aren't much fun so I hope you are feeling better soon. How cute are your house blocks? Had a feeling the brick fabric might be for something like that. You are going to end up with a fantastic quilt. Sheesh, that curved block looks challenging. Nice kitty kats and some great sewing.

Love your "houses" idea - can't wait to see the variety in the finished ones. And your cats are coming along nicely. I'm with you on that curved block - I would be really tempted to take a base block and applique the pieces on top of it - then cut away the base - but that's just me - ;))

I 'heard' my name,..... how did I get to be known as Carolyn? lol and I can't find the link :(.
I'm the one with the cold now :(.. am plotting to make a voodoo doll for whoever spread their nasty germs to me. I haven't had a cold in YEARS and this one has knocked me for a loop - all I want to do is sleep!
Those houses are going to be so much fun... I even have an idea myself & might do it even though I'm not in the exchange... once I get over this cold and feel like actually doing something.

We do get involved with obligations, don't we? I kind of like your guild's idea of having other people make blocks. My guild is doing round robins again this year and you reminded me that I need to get busy oh a RR border! How long does your exchange last? Does your guild meet throughout the summer? Here in Oregon, just about everything stops for the summer, so the RR will end in May, which is fine with me. I really don't want to do it again next year (I said that last year too), but maybe next year I will really mean it. The yellow curves block looks good! I think it will make a great quilt, but like you, I really don't do curves, but I have heard that it's really not that hard. I'm sure you will do great.