One week of "retirement" down...  I'm still not sold that's what this is, but for now...I guess it's the easiest thing to call what I'm doing...

I've been trying to do a little cleaning every day - stuff beyond the normal day-to-day stuff - stuff that you panic about when guests are coming over - stuff that's been neglected for far too long around here.  That's going well.  And doesn't seem so daunting when you do one task a day...

Once the chores are done, I get to sew!

I've been working on the rainbow scrap challenge (yellow) blocks.  I'm STILL not super into these, but if I do one a day - and do it first - I'm free to move on to whatever else I want for the remainder of the day! 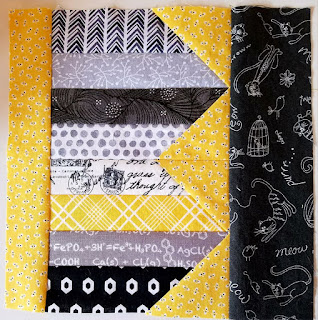 This one had corners lopped off and I made a little block with them, but am out of pin cushion filling, so it's just a block right now.  Sorry no photo. 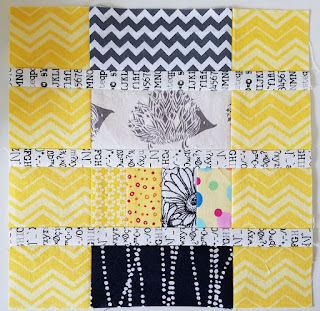 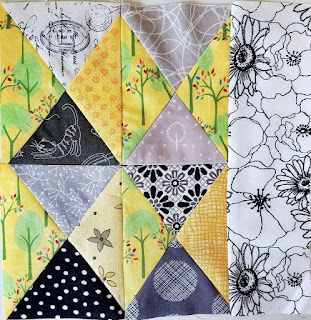 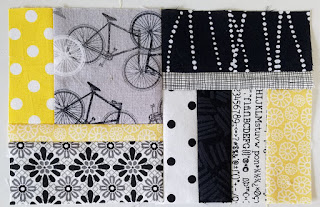 This one had an error in the pattern.  The black/white check needed to be cut skinnier than the instructions said.  I caught it before cutting, but I guess too big is better than too small if you've got to have an error!  (But I'm happy I didn't have to employ the seam ripper at all!)

Today, Friday, I did not make any blocks...  You see, earlier this week, I decided my UFO challenge needed to be my after-Patchwork City blocks reward.  I'm not sure it was exactly a reward...it was a UFO for a reason...

This month it was the Max and Whiskers quilt I did almost all of at a retreat about a year and a half ago.  Also known as the Kleenex box quilt.  (I did not name it that, but I can see it...)

This is where it was when it went into the box... 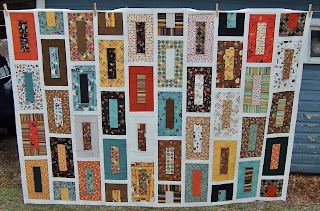 I considered leaving it here, but I had a lot of little bits of the fabrics left (it was a jelly roll) and wasn't sure what else to do with them, but follow the pattern, which had used the bits for borders.

So it needed another border and then the pieced border.

I bought the border fabric.

I pieced the pieced border.

And put it all in a box.

So it didn't take much.  Just sewing long seams, but not even that many.  And the pieced borders were only a touch longer than they should have been, so it wasn't even THAT bad.  Required almost no easing with the longarm even!

And the sun was shining when I finished it, if not frigid cold, so out I went to snap a photo! 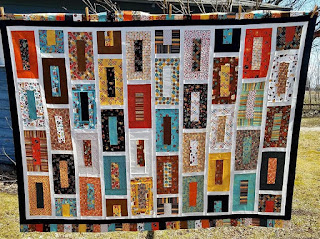 Not much different, but I do like the black around the outside.  It gives it a more finished feel.  And there were only enough bits left to do the borders on two sides, but that's how the pattern was written, so no surprises there.

And then JoAnn's had an AMAZING sale on calicos.  $3.99 per yard.  Though my budget is much tighter, I'd been given a prepaid Visa card as a going-away gift, so guess what I bought?  Backing!!! 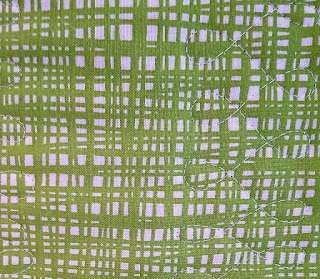 I absolutely LOVE this fabric.  It jumped in my arms and said "BUY ALL OF ME!!!!"  It doesn't exactly match the quilt (in fact, there's no green in the quilt at all), but it makes me think of green grass and the fabrics do have cats and dogs on there, so I think it's all good.  And it's my quilt, so I don't care what you all think anyways.  Unless it's good.  Then I'll care.

Today, I decided that, after chores, it would be a longarm day.  Maybe all Fridays will be longarm days.  (Until I run out of backs/batting...)  I also procrastinated a good bit (I even put the laundry away instead of leaving it sitting out for days!), but finally got down to it.

I don't have a finished photo.  It's a grey, cold, nasty day here (and they're predicting an ice storm tomorrow afternoon - hello SPRING????) and I've already been outside enough grilling dinner (the hubby's "allergies" turned into a cold...I knew yesterday, but he's stubborn), so maybe after the "winter storm" (winter storm?  what is this?  April Fool's MONTH?) this weekend, I'll get a good photo.  I still have to attach binding anyways, so maybe we'll just go for a full-on finished photo?  (Binding is made!!!)

What else have I been working on after the yellow blocks are done?

First up, I had seen this call for wonky log cabin blocks from Diary of a Quilter.  It's been a while since I've made any, but they're pretty fun.  And I do have a fair amount of skinny strips (strings) that are accumulating because I'm no fan of "string blocks."  Perfect alternate - and I LIKE these blocks.

So I made some with my yellow strips.  They were out and I had yellow thread in the machine.

The next day, I decided I'd catch up on the other colors from the rainbow scrap challenge.  So I made two blue ones (and still have a lot of strips left, but a LOT of a few fabrics and not much variety left, but progress!), three greens and a purple one, as my purple strips were most lacking.  I'm happy to report that all these colors of strings are much reduced.  But I'm not sure I'll make other colors, as the Patchwork City blocks actually take some fairly skinny pieces at times, so I'm gonna hoard those strips until I'm sure I don't want them!  (Sometimes that's all I have left of a fabric.)  And she wants them at the end of this month, so deadlines. 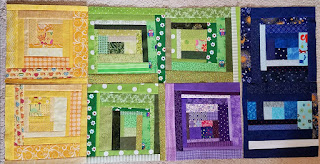 And then yesterday, I pulled out a bag of sorta-matching bits and rummaged through my stash and made a dolly quilt...top... 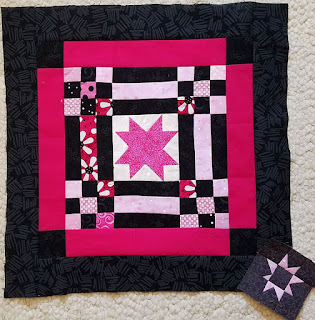 It measures about 16" finished.  I'll probably get it quilted soon, but the group my guild donates to don't need them until November, so no rush.  (And it's too small for A Doll Like Me.)

I also made a tiny star with scraps from this quilt as a leader-ender.  Not many tiny stars happening lately, but my cut squares have been depleted.

And you'd all be surprised to know I'm not sewing 14 hours a day.  Usually I do chores and shower and eat lunch and such until about 11am - getting up around 7am to the tune of Emma wailing at me.  Then I sew until about 2pm.  The hubby works until 2pm and has a 30 minute drive home, and though I know he's not expecting me to be sitting there waiting for him, I'm okay with having an end time.  I think it keeps me better on track!  We'll see how things shake out.  Week one is still a trial period!

Today I quilted for longer (about 4 hours on the longarm), but he was home, too.  (Day off to make up for working last weekend...sadly he's not feeling well...but I guess in the long run it worked out -  no germ-spreading except to me...ugh!)

So that's it for me.

I have no idea how weekends will go.  Usually the hubby leaves me to my sewing because he knows I need something positive after working all week, but that may change.  Of course, warmer weather is coming.  I think?  And that means he'll be out fishing a lot, so I'll probably have a fair amount of weekend time to myself.  That's okay by me!  There's lots of unfinished (and un-started) projects to work on - including thoroughly cleaning my house!  (I know cleaning doesn't sound like fun, but it felt infinitely good to move everything off the kitchen counters and scrub them down so well today...it's been far too long for that sort of thing...and you can't really tell a huge difference, but I know, so that's what matters!)

Off to figure out what to do on a Friday night...

Shhh on the winter storm - I WANT SPRING! REAL SPRING! I hope you know that if you ever run out of things/spaces to clean at your house - I'm only a mile down the road and you've seen that my house could use some deep cleaning. :) I can only do so much and would rather spend that little bit of energy on anything that doesn't involve the word housecleaning in it.

I didn't think you'd be at the meeting last night... I'll be there next week and the week after as far as I know.

Sounds like you are beginning to get in the groove. You'll get everything scheduled the way you want it soon. I still have a hard time making myself do what I need to when I need to do it! Today we hit almost 80 degrees, then a cold front this evening, with storms, rain and hail in some nearby areas, will have us in the low 40's tomorrow. I thought we were worrying about Global Warming, but it hasn't happened around here the past three week-ends! Your quilt blocks are cute. I've been sewing today too, and hope to tomorrow. Have fun! ---"Love"

Great blocks and pretty quilt.
Have a great weekend!

Great blocks, you have been busy!

I absolutely LOVE that green backing fabric! Great choice! Congrats on your retirement - I did it a while ago and hubby has been retired for one year (yesterday!) and it is an adjustment.
I'm really interested in watching your Patchwork City blocks. I have the book and want to work on it, but I must admit to being a bit indecisive about starting it. Have a great week!

Congrats! on a constructive first week of retirement. Thanks for the tip about what I have to do to get my house clean. I guess it will be clean in about 10 years or so... LOL!!

It seems like you are being very organized with your time. That's great! And good for you doing some of those annoying cleaning chores. It really does feel good "after" those jobs are finished. I do that every now and then when I get the urge. Unfortunately, I don't get the urge very often.

Love the border you put around the quilt. Beautiful! Way to go to get some sewing time in. Love that bike fabric scrap too. Good luck on the cleaning and organizing. Sounds like a great time to do it.

You have gotten so much done. It must feel good to keep crossing projects off the list. The log cabin blocks are lots of fun.

Great blocks, you have been busy!