blue squirrel, a new project and a new UFO

Since my last post...  I took two teenage girls shopping on Saturday.  That was fun, but exhausting.  (And thankfully, they weren't quite old enough to try to pick up the cute guy at the checkout at Best Buy, but boy did I hear about him on the way home...)

Sunday I focused.  I knew we had family coming for a late pay-per-view WWE match, so I had to take advantage of the newly vacuumed design floor before they showed up. 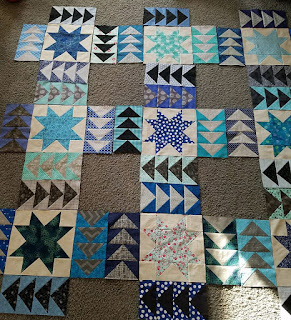 It was at this point I realized that I should have cut 6" squares, not 3".  Get the blues out AGAIN and cut some more squares.  (This project chewed through a lot of blue and now, bonus, I have a bunch of 3" blue squares...but don't worry, you still can't tell.)

While the show was on, I hid in my sewing room (I have no interest in silly boys pretending to fight with each other) and sewed and sewed and sewed.  I also ripped a few seams because you might note these geese are all flying in a certain direction around the blocks.  Despite my efforts, some of the geese tried to migrate counter-clockwise.  But by 9:30, I had a top!

Out into the unexpected "2 inches" of snow (more like 6 in some areas!) for a photo Monday after work. 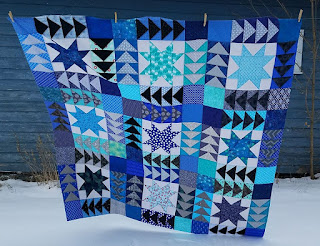 It was windy and crazy cold, so I hope you appreciate this nearly-flat version of the quilt.

I have purchased backing - a flannel that's printed to look a lot like a batik.  It's very unique and once I saw it, I knew that was "it".  Sadly, no photo and it's kinda dark for that sort of thing right now.  (How I crave summer and it's warmer temps and daylight past 5pm!)

Saturday, I arrived home from shopping to find happy mail...

I'd ordered fabric to make a quilt I first was on Pinterest, but it's a Missouri Star Quilt Company pattern. 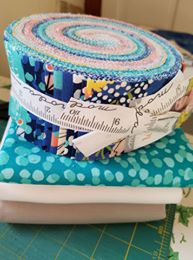 There's this guy at work.  His name is Philip.  He's a sweet guy.  Kind to everyone.  Puts up with the crazy of a lab full of women.  Crazy women.  He fixes stuff patently and methodically.  He's always in a good mood.  He got engaged a few months back.  We all knew he was going to ask before she did.  I debated with myself about whether they deserved a quilt for a wedding gift.  (I have no idea if I'll be invited and honestly hope I won't...sometimes that's just weird, that crossover between personal and work life.)  He loves orange.  When I saw this quilt, I knew.  It's not a lot of orange, but enough.  So I ordered the fabric.

This week at work was crazy, but I tried to carve out a little time at home each evening to get started on this project.  I knew there would be a new UFO challenge number called and a new Rainbow Scrap Challenge color named, but this would keep me busy in the few days until then.

One night, I cut parts until I thought my entire sewing room would explode with parts.  I don't have a photo of the mix-and-match that went on, but this quilt is rather scrappy, even though it's from a jelly roll.  What I do have is a photo of the parts pinned by block all tidy in a bin: 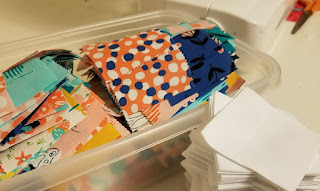 If we didn't have Spazarella the kitten, these might not need to be in a tub.  But we have Spazarella the kitten who likes to destroy everything.  She seeks out new things to destroy all the time.  She does not want to be tame.  Until she wants pets.  Then she will demand them of you and cute you nearly to death.  Until she's done.  Then she will attach herself to you with 20 claws and however many teeth a 6-month-old kitten has.  You will probably be bleeding after you extricate yourself from her grasp.

But I love her.

And she'll be a fine cat when she grows up a little.

But anyways, the parts are in a tub.  The white squares are not.  I've fished the white squares out of the trash that sits next to the sewing table twice already.  So you see, tubs are necessary, even if not entirely effective.  (So far, so good, but you all better knock on a lot of wood!)

So I started sewing up a few blocks from the paired sets you see here.  I have to make 56 and these aren't really easy to mass-produce, but the wedding isn't until June, so plenty of time, right?

(See my new ironing board cover there in the background?  Super awesome!)

So purple is the new color.  I don't have a lot of purple, but that's okay.  I have enough.  Hopefully no purple squirrels will visit this month.  But nobody hold your breath.

Last summer, I ordered a fat quarter bundle of Tabby Road by Tula Pink.  (Thought I had a photo, but guess not?  So you get a link instead.)  I couldn't help myself.  I had no idea what I was going to do with it, but knew I'd find something.  While at an AQS show a few months later, I came across a pattern that I knew would work perfectly, so I bought it.  And there it all sat.  Put that on the UFO list, right?

So I have a WHOLE quilt this month.  No wimpy block (never mind how many pieces that hexagon had) like last month.  An entire quilt.  But I'm excited to start this one.  And it's pretty simple, so I hope it goes fast!

And with that, I should go finish some Friday night chores (laundry, refilling the humidifier, etc.) so I can spend a good chunk of tomorrow sewing!  (I just hope this cold weather that's come back doesn't make my sewing room unbearable again...sooooooo ready for spring!)

Please ask Gabby don't eat the pins what she did with the link for the Tula Pink fat quarter bundle because I'm not seeing it and I don't think Emma No nor Luka did ( I'm missing one or two aren't I?.. seems there's always at least one who's name I've forgotten)
You missed my mini-trunk show last night :(. You weren't the only one though... only 14 of us came out for the meeting.

Spazarella the Kittten. Are you sure you aren’t one-fifth Australian? That is such an Aussie word to use. Squirrel. Love, love, love your flying geese and stars. Thank you for standing out in the cold and snow. Please to be sending whatever inclement conditions surplus to requirements to Ann, Sydney, Australia. Express Post. Squirrel. Love the fabrics and pattern of Phillip’s quilt. So you’ve got a whole quilt to make this month? You go Girl. Keep warm and snuggle kitties often.

Wow- your blue quilt! All those triangles and stars!
Love the orange/ blue plus blocks, too. That's gonna be pretty!

Love the FG quilt! I have always avoided making anything with tons of FGs, even though I love them, I don't love making them. I'm getting better about that though. The wedding quilt looks lovely. The kitty sounds like one my sister got several years ago. She has always had cats and this one (Button) was the worst one ever. She had to keep her locked in a room when she wasn't home or the whole house would be destroyed!! Now, however, Button is a very nice cat, so there is hope.

your quilts are fantastic! love them both equally... might just have to look up that pattern...

with a kitty like that, you just have to smile (while gritting your teeth and applying a bandaid) and keep on quilting. Your colleague's quilt is going to be so lovely.

Oh, I love that Sawtooth/Geese top in all those blues!

And I have that same ironing board cover but it's my very old one that needs to be replaced now.

Great geese! Congratulations on getting it finished. Such a great feeling!

Great looking projects! Love the blue sawtooth stars and geese. Good luck on making your goals for the month!

You really have a great way with using the whole spectrum dark to light, which makes the stars and Geese a winner. Nothing is mushed together. The orange with the blues is really nice for a young couple. Can't wait to see the Tula Pink project. The colors ans designs are exciting.

You go like the Energizer Bunny! The blue stars and geese quilt is so pretty, I knew it would be. That was a good squirrel! You co-worker is so lucky to be getting a quilt and it will be beautiful made with those fabrics. Happy quilting!

What a great blue top!

Love your blue Flying Geese and Stars quilt, very pretty. Sounds like you've got a lot going on this month. Good luck with all your projects and plans.

Your blue quilt is spectacular!

That blue squirrel is definitely worth chasing. Looks like you did a great job of capturing the essence of the Dreami!!! Love the Wild Nectar fabric. That is my Esmeralda fabric. Whatever you make, it will be gorgeous!!!

What Preeti said!! The quintessential DrEAMi! Oh I hear you on the kitten, and sometimes Bella, now at the ripe old age of almost 6 years old on April 12, is pretty nice, not sinking her claws into me quite as often, and being a lap or a stomach cat from about 4:30 - 6:30/7 am LOL. I just love the blues in this quilt, the patterns as well, and I am so WITH you on the fighting (literally as I have sewn with earbuds in to drown out the sound of UFC fights). Love the wedding quilt development too - man I've now seen more than a couple of squirrels vying for me to chase them... Thanks for linking up!