So where did I leave off?  I've been too busy sewing and such to blog, but I'm making time tonight.  The longer I go, the longer it takes, so it's time!

In my last post, I was making wonky stars, but knew I needed some sort of organization system.  To remember what fabrics I'd used.  Because eventually it's going to be tough to sort through stacks of hundreds of blocks.

I came up with this: 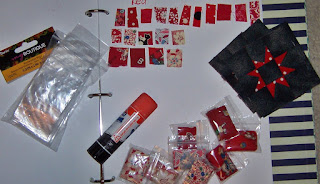 I bought a notebook and punched holes in cardstock pages, labelled pages with colors and am gluing bits of fabrics onto appropriate pages as the blocks are made.  I also purchased some tiny zipper bags to keep the 8 squares of each color together.  This way, I don't have to make all the reds at once (I realized that might be a bad idea if I change background colors and all the reds are the same...it might look odd...of course, it also might not be noticeable with all the other stuff going on!), but have a cheap, easy, reusable system for storing them.  That doesn't require my pins!

But here's a sampling of some of the more recent ones...ones that I remembered to photograph... 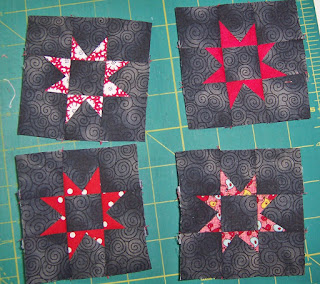 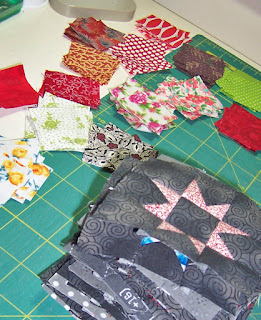 You can see my big stack in that last photo, as well as bits from the next project... 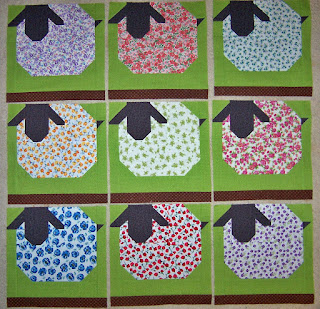 I still have to make the cornerstone blocks - that's up tonight - but I'm pretty sure I made the right choice with the florals.  Some of these I like a lot more than others, but I think as a whole, they're what I was looking for.

In the middle of all this, Mother's Day to be exact, my hubby's mom told us her niece (hubby's cousin) was turning 40 on the 20th of this month.  Cousin's hubby was throwing a surprise party Saturday and we were invited.  On the way home, a discussion of giving her a quilt happened.  I have the Closet of Shame, so I knew I at least had a top.  And I was willing to rise to the challenge.

A top was chosen Sunday.

Backing fabric was purchased and sewn together Monday.  Also Monday - I don't have any longarm thread that even comes close to looking good with this quilt.

Tuesday I raided the stash of a local longarmer and got some thread that was perfect.  A boring, drab color, and nothing I'd just buy, but one of those that goes with a lot of more traditional quilt colors.

Thursday guild meeting and squeeze in an hour of hand-binding.

Saturday, at guild sew-in, make and sew on label.  Saturday night, give gift.

I don't have much in the way of photos (Sunday I realized that despite my intentions of taking photos, I didn't!)...

So this is mostly it - starting on the longarm: 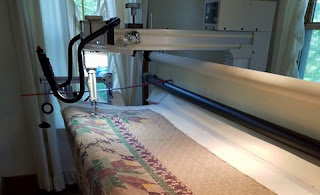 You may remember this quilt from the 2012 UFO challenge, where I blogged about it here.  It wasn't one that I ever saw myself using and the hubby thought it a good choice for her, so I was game.

And we were actually celebrating her 27th birthday.  (Perhaps for the 13th time, but that's okay.)

I promise a full story and photos eventually.  Her house is between here and the hubby's work, so he's promised to get photos for me, but he's got the week off work this week to go fishing, so it's gonna take a bit longer than I'd like.

So due to the 27th birthday quilt, I got behind on the mini wonky stars.  I'm only behind by 6, so I'm not worried.  They don't take that long and I've made quite a few as leader-enders with the sheep, so I'm doing okay.

But then there was the e-mail from a former coworker.  My e-mail program at work has his birthday saved in it, so it pops up every year.  I sent him a quick e-mail wishing him a happy birthday, figuring I wouldn't hear back.  He was a good guy, but I know how these things go.  He e-mailed back about a week later, not only thanking me and sounding happy to have heard from me, but sharing a photo of his new baby girl!

You may remember the hedgehog quilt?  I made that for his oldest, as a big sister quilt (and I never have posted about the baby quilt...) a few years back.  Well, turns out, he's got another little girl.  So what does a quilter do?  Well, decide to make another quilt of course.

I've decided on a quilt called Boomerang by Crazy Old Ladies.  I haven't decided on colors yet, but I think that will happen tonight, as I shop the stash for fabrics for my sheep cornerstones (those cornerstones are actually whole blocks!).  I did buy some white fabric this weekend, but plan to make the rest of the quilt from my stash.  I hope!

I hope to get this one finished sooner than later, and ordered/downloaded the pattern already, so it's just a matter of getting other things taken care of...like sheep!

And then there's the 5-year-old niece who got a big girl bed a few weeks ago.  (The hubby and I may have had something to do with that.)  And all she has is her baby quilt.  And a comforter her grandma bought her after she got the bed.  No offence to grandma, but a quilt is much better and her big sister has a quilt on her bed - in the room they share.

I'd chosen the pattern Twisted Blossom by Sew Kind of Wonderful a few weeks ago.  I have the quick curve ruler and love the pattern, so it's time I put that expensive purchase (those rulers - how can they be so expensive!) to use.

The pattern was free...with a catch.  You had to buy the Metro Twist pattern to get the instruction to make the curved pieces of the block.  So I did.  Again, a download, so I have it in my hands already.

This time, though, I wanted to buy the fabrics.  Mom had painted the girl's room hot pink and turquoise, so that seems like a good way to go.  I'm not sure of favorite colors, but I'm afraid to ask.  It's likely to be "Frozen" or "Wonder Woman"...which aren't really colors...

Anyways, I got some fabrics yesterday and they, along with the white (more white for this one - I might be making a mistake with that color choice...) - in a different load, of course - have been washed.  Awaiting pressing, but I'll get there. 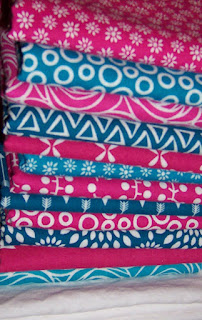 (boy, I went a while there without a photo!)

I'm not sure if I'll make the blocks scrappier, like the original pattern, or each block one print.  I suppose I'll have to make the same number of blocks parts either way, so I can try it both ways.  I'm aiming for Christmas for this one, so it will probably get procrastinated a while.

And then there's the projects that are nearly done.

Two of the projects I worked on back at the retreat in January at to the stage of tops and need borders.  So at my guild's Saturday sew-in (where it was just me and one other member!), I worked on that.

I didn't take photos, but I did make progress.  I also bought a little more fabric for one for a second, solid (well, grunge) border before a pieced one.  And for that quilt's binding.  I hope to have these tops done soon so I can get them out of the nearly-finished pile.

And then there's the Hunter's Star I'd like to make for my nephew, Hunter.  I bought the ruler for it, but that's as far as the idea has gotten. I've seen so many ways of placing colors, I think I'm just on overload with it.  Or maybe nothing has really spoken to me yet.  But that's slated for another Christmas gift (as my original plan of his late-March birthday failed miserably...), so another one to procrastinate.

Oh, wait, there's one more!  No photos again (I really need to get better about this!), but we traded our block boxes again Thursday night.  The one I have this month has some fairly complicated 6" blocks, but after my tiny 36-patches, my wonky stars and the 6" blocks for the Vintage Farm Girl quilt, I'm confident I can handle this.  I'll try to remember to take photos of what she's doing!

And how could I forget the UFO for the month.  I have the backing pieced.  I've got the longarm thread.  I even bought more batting (since I used my last big one on the birthday quilt), so no excuses.  Maybe this weekend?  It will be a 3-day weekend...

So I think that's it.

PS I'm hoping June doesn't get here too fast, since that will bring a whole new batch of projects with the UFO challenge and the Rainbow Scrap Challenge!
Posted by Katie at 6:42 PM

If that many projects were whirling around in my head, my family would have to have me committed! Of course, they may have to do than anyway, even though I can't seem to keep even one project whirling in my head right now. I really don't know how you do it all, but no doubt, you'll get it all done. I have a local friend that's going all the time, just like you. She makes me tired! ---"Love"

Some years ago, now, I referred to you as Super Girl or Super Woman or some such thing. I was worried that I had offended you, but really, Katie, how else do you explain all of this quilting activity? Of course, I love the stars and who doesn't love sheep. But, I am with "Love" in thinking that my family might consider having me committed, too. You don't need any cheerleaders but I can't help but say "Go Katie, Go!"

Crikey! If you could bottle that quilting mojo you'd make a small fortune (at least enough to support your quilting activities). That's a neat idea for keeping track of the cutie-pie wonky star blocks; I'm so pleased that you made the sheep in floral fabric - they look terrific. As for all you other projects - it's going to be a real treat to see them come to fruition.

I had to laugh when you said you were "afraid to ask" for favorite color. I have been wondering about giving my to GSs new quilts - so far they have only gotten baby quilts and they are now 6 and 9. I know some people have a "Policy" about giving quilts at certain ages, etc. So far, my only policy is high school graduation and marriage. Although, I did make quilts for my 2 oldest grandchildren at some time during childhood. I have one quilt for a GS ready - the Virginia Bound Bonnie Hunter pattern that I made at a Bonnie workshop. So, what I want to do is make another quilt out of men's shirts for the other GS. I'm afraid to ask also, because I DO NOT want to make a super hero quilt. It goes much better when a quilter "Likes" what they are making, don't you agree? Any input would be welcome. I look forward to seeing the Twisted Blossom quilt.

Wow, you have been busy and productive! The little wonky stars are all adorable, can't wait to see this quilt. I love the sheep! They are all so cute. What a great use of the pattern. I have a sheep quilt planned, but using a different sheep pattern. Now I may have to make two and use the FGV sheep pattern for the second one. Just what I need, more ideas!

You are prolific, and all your quilt look fabulous. I'm feeling a bit sluggish over here, but now that the high school graduation is over and the garden is pretty much rest for the season (except for weeding maintenance, of course), I have plans! Not as many as you, but some :)