In March of 2015 I took some jelly roll strips my sister-in-law had given me in a bag of scraps intended for charity quilts and sewed them into blocks.

It was a pattern I'd seen at a quilt show (a quilt that was hanging) and I remember thinking to myself "that would be a great pattern for a simple charity quilt" and I took a photo.

I winged it and took this photo of the layout (and probably shared it way back then...): 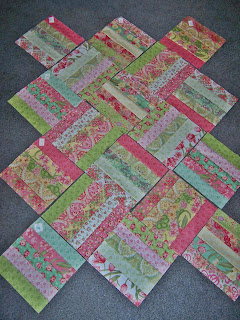 You can see I labelled the rows and everything.  (This photo would have been most helpful yesterday, but we'll get to that - I didn't go looking for it until about 2 minutes ago.)

I picked them up and set them in a box because I needed fabric for setting triangles.  I thought, at about 45x60, this would make a nice charity quilt.

That was over 2 years ago.

About three weeks ago, for whatever reason, this quilt popped back into my head.  (Maybe it was the moving the boxes...you know, the ones you saw sitting all over my sewing/cutting space in the previous post?)  And two weekends ago, I went to my local quilt shop and picked up 2 yards of a nice marbled pink.  On the bright side of these prints, but I had the fabrics with me, so I knew what I was getting into.

This Sunday dawned and I was ready for this!

Consult the internet for math to determine how large to cut squares to then cut diagonally (either once or twice, depending on my final plan for them) and then the actual math.  And then onward to find a website that told me what to cut without math.  Turns out, Sunday I could do math.  (Some days...well...)

Then let's lay out those blocks.  Hmmm...what is this number one?  And where does two go in relation to #2.  And which direction does this go.  Thankfully I still had the photo from the quilt show.  It never occurred to me (until I went to bed last night) to see if I'd taken a photo of MY blocks.

Seeing my photo above tells me I layed it out backwards, but it's all good.  I rotated a few blocks as needed to make sure there wasn't too much matchy-matchy stuff going on,  but with something this busy, I wasn't too worried. 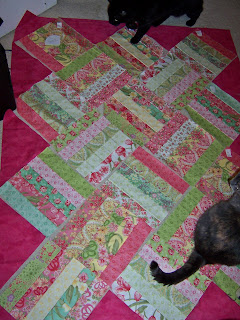 As you can see, I have much help.  Four seconds after I took this photo (and six others) and decided it was good enough because the cats wouldn't leave it alone, they all left.  Not just the quilt blocks laying on the floor, but the entire room.  Of course they did.

The blocks had become a little wrinkled while hanging out in their box, so I gave them each a nice press as I was making sure they were all going the correct direction.  This was made harder by the pauses to dance along with the Guardians of the Galaxy soundtrack station playing on Pandora...but it made the long seams seem much shorter...not the dance, just the good tunes.

By the time the hubby was finished with his nap (Pandora requires headphones, as the hubby thinks that anything that is not classic country or Led Zeppelin is the most horrible noise he's ever heard *eyeroll*), I had a top - complete with just a little border to stabilize any remaining fabric wishing to go wonky with bias edges (all the bias was sewn into the quilt by this time, thanks to careful cutting, but you know how these things go). 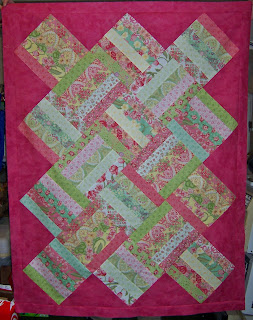 Due to windy, on-and-off thunderstorms, I made the hubby hold this up for me tonight.  He was fairly willing (I'm not sure what he wants, but I'm certain I'll find out soon...), so here you have it.  And extra UFO finish for April!

Though it's still just a top (measuring about 51x61), tonight I bought backing fabric.  Without any of the top fabric along. 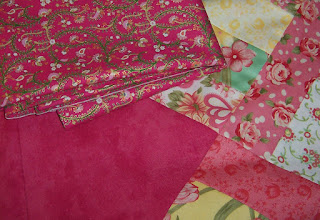 How's THAT for a match?  Though there's gold in that back fabric, I think the colors are perfect.  And I cut the binding from the setting triangle pink, so it's all gonna be great!  I'm still mulling over quilting motifs, but I'll get there.  I do want to get it done sooner rather than later.  There's a charity organization in my area that provides all sorts of items to foster care kids - it started out as a suitcase project so the kids don't travel from one home to another with their belongings in a trash bag and has grown to so much more.  One of the gals in my guild has become very active with this group and another foster care group and has donated something like 27 boy-themed quilts.  I thought one girly quilt could sneak in there if she's willing...and if she's not, the local domestic abuse and homeless shelter will surely take it.

As for the UFO for this month, I was kinda hoping for a different quilt to be chosen, as I've had a good idea how to quilt it (no reason I can't do it as an extra, but we'll stick with the program for now and see if I get that done...then I can work ahead, okay?), but #11 was chosen. 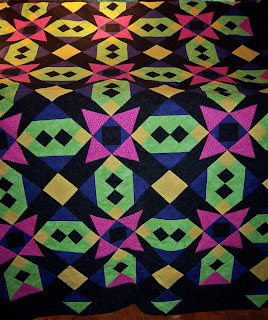 As I went looking for a photo, I realized this was the one I didn't have a photo of the top.  Well, it's out of the closet now, but I just draped it across the longarm so you get a better view than before. The colors towards the bottom are more true than those at the top with the lights shining on them.

I think it still needs borders.  I think I'd planned to do that blue/purple as the borders.  I know I've used some of it since, so I hope I still have enough.  Or maybe the black.  I know the black is still out there (I saw it tonight and should have gotten some for binding...oops!), but auditioning will begin soon.

My trip to the store tonight was intended for fabric to back this quilt.

I went in planning to buy a black or grey-with-black print. 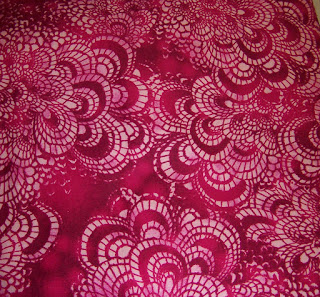 Apparently I have a pink problem tonight.

This is flannel and once I saw it, I couldn't talk myself out of it.  And thankfully, though I needed nearly 7 yards (this is a big quilt!), they had enough.  AND it was on sale!

It's in the dryer already!

As usual, I have no idea how I'm going to quilt this, but I'm off to a roaring start, right?  (We'll see how the rest of the month goes...)

With all this pink action, though, it looks as though I'm going to need more pink thread for the longarm.  Because there is no way the first quilt will be quilted with any other color and because I think any other color (say, black) would absolutely ruin the loveliness of the back for the second.  (And it's all about the back, right?)

I have an idea for my May dolly quilt.  I wanted to start it last night, after getting the bonus UFO top done, but convinced myself to sit down and sew the hand-sewn side of the bonus April dolly quilt instead.  (That's finished, too!)

And I'm waiting to hear on the color for the Rainbow Scrap Challenge.  I think she announces those on the first Saturday of the month, though I always go looking on the first DAY of the month and am disappointed.  Not by the gal running the challenge, just by my impatience.

You found some beautiful backings for your quilts; both will be perfect! Can't wait to see how you quilt them! ---"Love"

Oh Katie, I do so enjoy reading your posts and marvelling at the wonderful quilts you make. You take such a lot of care, no matter who the quilt is for. Great choices in backing fabric. I need to deputise you to choose my backings - I can trust you with my credit card? (chuckle). I too am champing at the bit to see what colour is announced for RSC May.