I know it's been a while.  A few of you have been asking where I am.  Life seems to enjoy throwing curveballs at me a lot lately.  It's taken a lot out of me to dodge them...and nurse the bruises where those I've missed have hit.  I'm trying to keep quilting, I am.  I'm trying to keep up with blog reading, I really am.  Some days it's easier than others.  But today I'm going to share with you what I've been working on for a while now.  To prove to you (and myself maybe a little) that I HAVE been quilting something.

About 5 months ago, I saw a super cute quilt on Pinterest.  Oh Pinterest...if only I could sew as fast as I can pin...  I followed the link and found there was a quilt-along for a new book to make this quilt online.  Starting about 2 weeks from my discovery.  I didn't jump in at first - I had to think a bit - but I decided to do it and ordered the book.  Then I had to wait the agonizing four days for it to arrive!  Once it was here, I dug through my stash, as this quilt is supposed to be a good stash-buster, and assembled a box of fabrics I thought played nicely together AND captured the look I was wanting.  (I should probably go take a photo of that box...)  I was ready to go when the quilt-along started!

Anyways, the deal with the quilt along is that you make two blocks from the book each week - on Farm Girl Fridays...well, except week one where you make just one.  I've sort-of been keeping up and am currently only about 5 blocks behind.  (I'd be making more right now, but one of the curveballs includes an electricity issue that doesn't allow us to run many things at a time in our house - the iron takes a LOT of juice, so I'm trying to let the hubby enjoy some air conditioning right now - we're working on it...slowly...)

So today I sewed block #32 (of 45) so I could have even sets of four to share in photos.  (Though Emma did offer to sit in for the last photo, she's not as easy to position as a piece of fabric...) 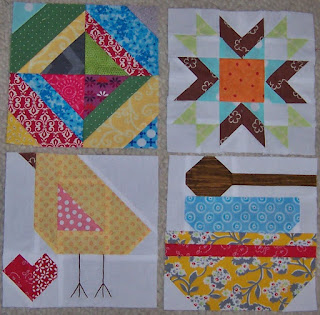 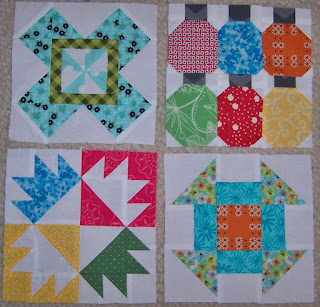 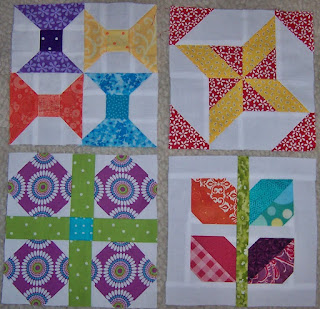 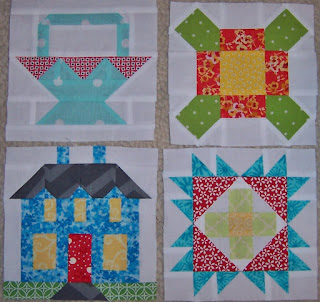 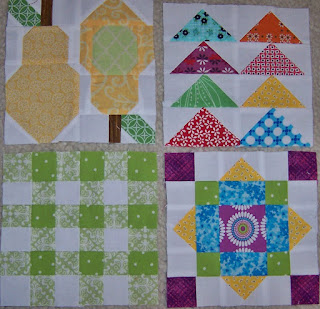 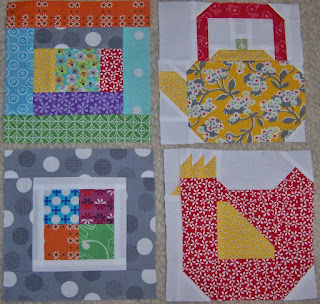 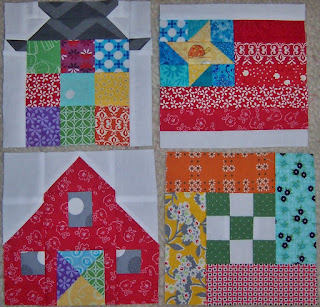 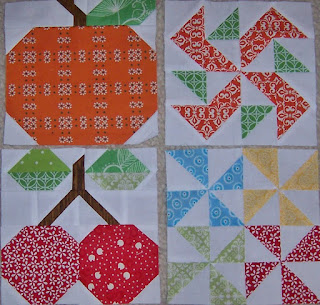 If you didn't click the link above to the blog where the quilt-along is happening, it's from Bee In My Bonnet with Lori Holt and the book is called Farm Girl Vintage.

Each block represents something farm-ish and the blocks are named accordingly.  A few are traditional blocks with farm names and a few are her own design.  The book is great because it has instructions for either 6" or 12" blocks and they're very detailed.  I decided to go with 6" blocks - what was I thinking?!

I guess this is a good stash-buster, but really the only fabric piece I've noticed a change in the size is the white I'm using for a background!  But I am having fun.  I've learned a few new ways how to make block parts, though I'm not sure some of her methods are the most frugal.  (But when the biggest piece I've cut so far is for the pumpkin (which was supposed to be 1" squares of different oranges - I don't have enough different oranges), I suppose I'm not wasting that much.)

This is also new to me to make a sampler quilt.  I usually stick with quilts that have one or two blocks making up the entire quilt and have never really been interested in making a sampler quilt.  They say tastes change, but maybe it was just that the right quilt had to come along?  (Because though I can still appreciate all the effort that goes into sampler quilts, I've yet to see another one that appeals to me as much as this one still does.)  Funny, though, that I've been quilting for 20+ years now and this is the first sampler quilt I've made!

There is an Instagram "group" (as much as you can have a group there, I guess) that are posting their blocks, too, so I've been sharing there as I get them done.  It's fun to see colors others choose and sometimes (like when I'm behind - like usual), I can get inspiration for a different color placement than the book has given.  Look for #farmgirlfridays over there if you want to see a good variety!

I'm enjoying the process, too.  Many of these fabrics are fat quarters I've hoarded for a while - being favorites I don't want to cut into.  Or that one fabric you rearranged a whole quilt plan around while standing in the middle of the store because you couldn't not have it in your quilt and so now that scrap is priceless!

This quilt is for me, so all those fabrics I've only wanted to pet until now are being used.  And I can keep it and pet the whole finished project one day.  Maybe soon?

In other quilty tidbits, my guild sent a box to Diana's Golden Needle - the Girl Scout Gold Award project project.  We had 251 blocks in our box.  I had counted and thought we had 247.  If I had known we were ONE block short of 6 entire quilts, I would have made one more that night before the box went out the following day.  And being the responsible adult I am, when filling out the FedEx shipping form, I included my phone number.  Little did I expect the phone to ring a few days later, but it was Diana's mom calling.  She was overwhelmed with what our box contained...not a surprise to me, but I'm fairly certain this will be the largest donation of blocks the project receives from one group!  I'm pretty proud of my guild and what we accomplished and I had fun making the blocks and seeing my stash reduced a little. 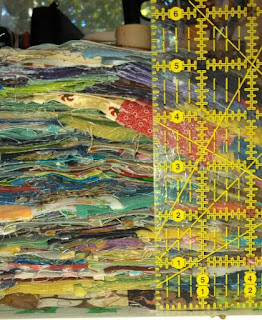 This photo was taken a week before the blocks were due.  It's not all of them, but you get the idea - it was a big box!

I haven't been working much on my Arcadia Avenue quilt.  I worked on a block at quilt retreat at the end of July and had some difficulty (due to a lack of thinking ahead on my own part) and it's been frustrating me ever since.  So time for a break on that.  It's not one to rush through anyways, what with it's 200+ pieces per block!

I also quilted a top that had been hanging around a bit to put on my bed at retreat, but I haven't gotten a photo of it yet.  I'll have to do that soon, but it was finished for retreat and looked great on my bed.  I hope to start a tradition for future retreats!

I've been doing leader-ender sewing with all sorts of stuff I found after a semi-cleaning of my sewing room.  The removal of fabrics for the Farm Girl quilt led me to a new method of storing my stash.  I think it will be more user-friendly next time I need to go looking for stuff.  Making little quilts for dolls out of what I've found feels good, even if it seems to take forever doing it leader-ender style!

And a coworker announced this week that she's having a boy in January, so you all know that means I'll be making a boy quilt here in the future!

So there you have it.  Alive and kicking, though not sewing as much as I have in the past.  I hope you're all having a good holiday weekend (for those of you who this weekend IS a holiday) and I'm going to try to be more regular about posting, but don't go holding your breath!

From someone who hasn't posted anything new since July, not to worry. Life gets busy!

I have looked at the Farm Girl blocks several times and never thought about joining in until I saw yours. I love the fabrics you are using, it will be a fantastic quilt and a great way to use all those fabrics too special to cut into. I have made a couple of sampler style quilts, but seem to choose other styles now. Right now I am still trying to get some quilts finished for my kids and new grandson due in November. Once I finish these last four quilts I think I can make some things for myself for a change. Of course, someone will decide to have another baby before I get to my own stuff!

Hope you get more sewing time soon, Have fun with it! ! !

I'm glad you're alive and kicking - and back to blogging! Love your color choices for the Farm Girl Quilt. Now I'm curious about your "new method of storing your stash" - tell me more - ;))

For starters, lest I forget, I too would like to see/hear more about your stash storage. I just went through that --- sort of.
Now back to your new blocks; they are all so cute, and I'm sure the finished quilt someday will be adorable! Reading about all the different blocks made me remember my different Civil War blocks that I worked on forever and still haven't gotten together. After making the Underground Railroad sampler and then all those blocks, I just lost interest in samplers. Some day I'll get the CW ones together. Sounds like your life as well as your quilting projects have all been complicated lately; just take it slow and easy for a while. Remember, this hobby is supposed to be FUN! Glad you're back to blog land! ---"Love"

Lori Holt's quilts are all adorable! I would love to make one, but have too many other quilts either in progress or on my list! Your blocks are so cute and I can see why you were saving the fabric. This is a great quilt to use some of your favorite fabrics on. Squeezing your quilting in between the electrical issues must be annoying, but at least you are able to get quite a bit of sewing done. Too bad you don't have a treadle sewing machine. Wouldn't that be fun?

It's really nice to hear from you Katie and see what you have been up to. This quilting gig isn't a job so there's no obligation to please or appease your fan base. Post when you want and when you can. Quilt, don't quilt. I haven't been sewing much lately but that's okay. This is meant to be a fun pastime not a punishment. I'm not a sampler quilt fan either but your FG blocks look terrific. What a fun, bright and cheery quilt this will be! Electricity issues are a pest. Our house needs some re-wiring (there is still paper covered wires in the front half) but funds are limited so it has to wait.

That is a lot of progress from someone who isn't sewing much. ;) Every time I see that sampler sew a long I am so tempted to jump in, I think it is really cute. So far I am holding strong. I just have so much going on that I know it will just end up as yet another UFO.
Sew on.
I hope your electrical issues get sorted out.

I'm sorry life has been throwing curve balls, and I hope you manage to duck more than not. Glad to see you here again, though as Ann said, this isn't a job or a punishment. Post when you feel like it and we'll see you when we see you! It seems like you're managing a fair bit of sewing therapy :) I like your sampler so far. Gotta love the fun bright colours! And yes, please do share more about your new scrap storage method. Mine are starting topile up again over here.