help! i think i'm turning into a scrap quilter!

After a fairly unproductive couple of days, quilt-wise, today I made time to sew!  There's been a fair amount of other stuff going on in this house and I just needed a good break - some "me time."

First, a quick update on Luka.  He went to the vet Monday evening and his heart murmur is a 1, maybe 2, at this point.  Whatever was going on seems to have resolved significantly, but the vet doesn't have much to offer by way of explanation.  I'm going to just take it as good news and relax.  He's still not acting like anything is wrong, but I'll take him back in about 3 months for another checkup, just to keep an eye on things.

I knew my first order of business today needed to be getting my block made for the block exchange.  If you remember, this block is the starter from the box owner... 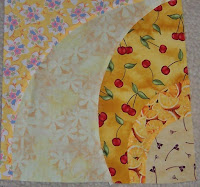 I googled the block and found a video where the designer, Cara Gulati, talked with Kaye Wood about making her quilt/block.  I watched the whole episode and felt a little more confident - both she and my friend said the blocks could be trimmed to square if things didn't go well.

I'm not going to show what I made, but I ended up making two blocks.  The second looks a little better than the first in some aspects, but I don't feel the construction went any easier.  My friend kept saying that these blocks are addictive.  I would like to assure you that they are NOT addictive.  At least not to me!

I made that second block, thinking maybe it would get easier and I'd make a few more after that - playing with fabrics is always fun and this is a very good excuse.  I also know the quilt is going to take more blocks than one per person participating, so having an extra or two would probably be nice.  But after #2 being just as difficult as #1, I decided it was time to move on to other things.

When digging through my stash for turquoise fabrics to make my cats, I found this pile of triangles...

...I remember what project they came from, but not why I have them.  (I don't have companion triangles like normal, so I'm not sure what happened!)  But they're such a beautiful color and I love the fabric and I decided I was going to try to make something from them if they didn't find good spots in my cats.

I decided these needed to be the goose part of flying geese...shop the stash... 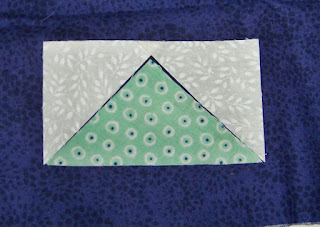 ...the same white I used in the purple bonus dolly quilts came to play here, too.  But I also pulled that blue (almost a purple!), auditioning it for where the white ended up.  I felt it was too dark there, but really liked how it made the tiny dots pop, so I kept it out while making up a pattern as I went.

After sewing the geese into three rows, they were pretty small (finishing at 1.25"x2.5"), and I had a strip of the green already cut, so that went between rows of geese.  Then a small-ish white border and then a final blue border. 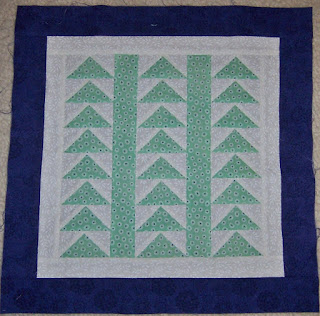 I think I like it, though I'm wondering if I should have put that blue in there as a skinny inner border instead?  Or perhaps another border of the green/turquoise?  The blue will also be the binding.

It's about 15x16", but I don't remember exactly what I cut for the borders right now.  It's a little larger than the orange froggy quilts I made earlier in the month.

None of the dolly quilts for this month, this one included, are quilted yet, but I'll get there.  I have another one-day quilt retreat coming mid-March and I quilted about 6 dolly quilts at the last one, so maybe that's what I'll do with these?  Save them up...

And I also worked on string blocks as leaders and enders.  I worked on the purple one last month and finished one turquoise one today, plus started a second! 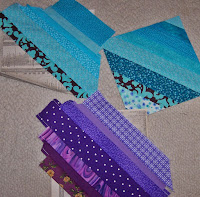 I'm making these on old phone book pages and trimming them down to 7.5" when I'm finished.  I've made a few in other colors, too, but these are really not my thing.  But I'm trying to not waste good scraps and these strips are hard to toss out.  (I cut 2.5" squares out of leftovers too small to go back into the stash and these are what's smaller than that, but too large to feel good about tossing out.)

I have no idea what I'll do with these, but I'll just keep making them for now, trying not to use the same fabric twice in a block.  That makes them take longer!

So, as you can see, I've made a lot out of scraps here...I never thought I'd be this happy working with scraps, but I am truly having fun.  I think part of my mental block to becoming a scrap quilter is how my mom scrap quilts.  To her, everything is either a light or a dark.  I can't do that.  I have to have more matchy-matchy than that, but there are a lot of bloggers and quilters out there sharing their work online and I'm beginning to see that scrappy quilts don't HAVE to be done the way my mom does them and seeing a lot of quilts I like that are controlled scrappy is motivating me to try scrap quilting.

But both last month and this, I've found a stash of one fabric in cut pieces that I've had fun designing a project around.  And now I'm kinda looking forward to next month, perhaps finding another bonus project in the pile!  I'm hoping all this stash useage doesn't cause mine to reproduce like I've heard it does, but I suppose that would be okay now that I'm embracing my stash.

And now I need to stop procrastinating and work on binding Retro.  It's the last thing on the list for February...I started it last night, but didn't get far before the hubby decided I needed to run to Taco Bell and pick up the dinner he said he didn't want an hour earlier.  (He's part of what's going on around here and needs my attention much more than usual.  It's nothing bad, just a simple procedure and a short-term reliance on me...but it does make me appreciate the freedom I usually have!)

Interesting post! I understand your need for matchy-matchy scraps quite well. I ran into that at retreat last fall when I started working on a Christmas string thing. I really need to come to terms with what I like. Actually, I just need to decide to start quilting again, and soon! I'm betting your strings will turn out great, whatever you do with them. ---"Love"

That's goo news about Luka and Best wishes for a speedy recovery for DH. I'm with you - controlled scrappy struggle to do random - so your string blocks are singing my song. Keep going, they'll *speak* to you at some point and reveal what they are meant for. Cute little flying geese quilt. Strangely, I rather like to strong blue against the mint turquoise and white.

cool geese from nothing! I like the idea of adding another border, wider maybe?, in the green. Pretty string blocks, too - I really need to organize my thin scraps to do this. Wasn't I just staring at the phone book feeling bad about wanting to throw it out. . . . ?

I am so anxious to see the blocks you made for your partner. That is an interesting block she gave you for ideas. I hope you get to post photos for all the quilts from your block exchange when it is finished. All of those little flying geese are adorable! They made a cute little doll quilt. Love the colors for the string blocks. The blues are beautiful and the purple is great! I love sewing with scraps but I need a little control over mine. Things just randomly sewn together don't do it for me, gotta have a little control there. Glad to hear Luka is doing well and hope hubby heals quickly!