I'm back and it's only been, like, two weeks! 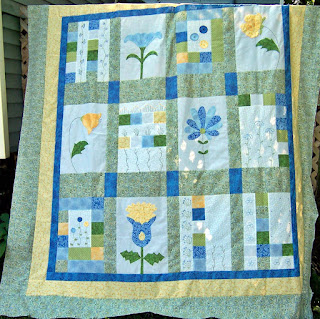 Okay, maybe not THAT long ago, but it's been a while.  I finished it up as part of the UFO Challenge over at Patchwork Times back in 2011.  (Back when she was quilting a LOT.)  You can see the posts about it here and here.

It hung in the closet all this time.  Waiting for it's purpose.

About a month ago at my quilt guild meeting, one of the gals talked about a tea the women's group in my city is hosting to raise money for their organization and is doing it along with the domestic abuse and homeless shelter.  You can "purchase" a table and decorate it and compete, as they are judged.  But there is also a silent auction and as soon as that last bit was out of her mouth, this quilt was in my head.  I knew where it was meant to go.

I went out and purchased fabric for the back that worked so perfectly, you'd have thought it was part of the original kit.  I got the batting out and let it relax and thought on how to quilt it for a week or so.  Many of the parts I knew, others I wasn't sure...all that applique...

But I knew the deadline was approaching and if this would be considered a big-ticket item that they'd like to use to advertise and draw in more folks, sooner was better.  So I ordered some thread and quilted it. 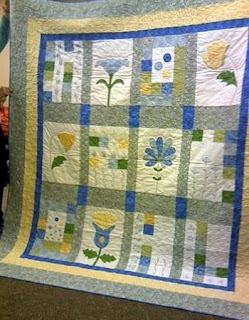 I neglected to take a photo, but there were so many people oohing and ahhing at this, I knew one of my friends had a photo, so she shared it with me so I could share with you.  You can't see the quilting a lot, but, well, okay.

I quilted the borders and sashing quite a bit, but not so much around the applique.  I kinda regret that, but I was really getting sick of this quilt and all the thread it was eating and I can't echo quilt as well as I'd like to and...excuses, excuses, excuses...I just didn't.

I gave it to one of the gals involved in the tea and she said it might not make it to the tea.  It just might end up on her bed.  I told her so long as she made a donation to the cause, that was okay with me!

I'm not exactly sure when the tea happens (they've told us the date half a dozen times, but it never sticks in my head), but I've asked the gals to let me know how it does.  If it does well, there might be future donations!

It's about a double-size and everyone was baffled why I didn't want it myself.  I don't like it.  I'm not sure if I ever did.  I got sucked in by the idea of the kit being all ready for me and liking the mix of piecing, applique and embroidery.  But the colors?  SO not me!  I just hope someone falls in love with it and it will bring a good donation for both groups.

Since this has been done for a few weeks, I've been working on other projects.  Trying to make myself have some quilty mojo.  It's been slow-going, but maybe getting there?

I shared this tease of dolly quilts from my bag of scraps... 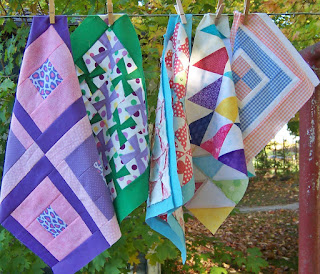 Spray basted and binding made.  Ready for a 1-day quilt retreat next Saturday!  The gal in charge of this project wants them by the end of the month and wants 40.  Currently she has about 20.  This should help!  (And nothing like a deadline to get me motivated...) 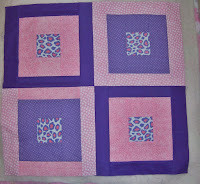 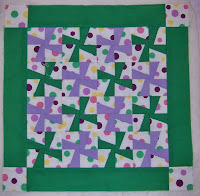 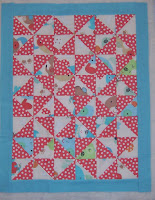 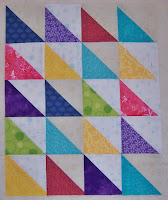 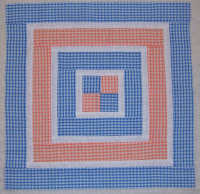 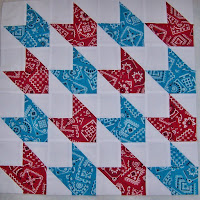 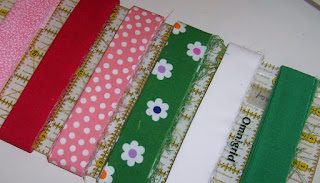 ...see I wasn't lying about the binding!

And then there's the latest charity project...while checking my instagram feed, I saw a post about making blue heart blocks that would become quilts that would be given to families of police officers killed in the line of duty.  I followed the link and ended up with the full story at Canoe Ridge Creations blog.  I shared the post with my guild and had a good amount of interest in just a few hours.  So I downloaded the pattern and dug into my royal blue stash (sadly lacking!) and eeked out this one block to use as a demo at the meeting that night. 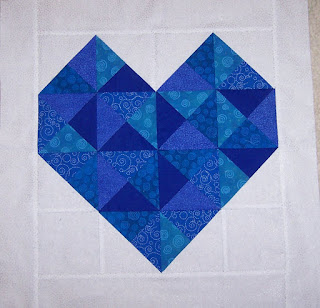 And when I got there?  One other gal (the one who also brings her camera AND takes photos...) had one made for me, too!  Super awesome!  I know there are others interested, so we'll see how this goes.  I e-mailed the gal putting this together, but haven't heard back yet.  I imagine she's in the "be careful what you ask for" stage of shock at responses.  Or my e-mail is in her junk file?  Either way, it's early yet (she posted on Wednesday and I sent the e-mail and presented it to my guild officially on Thursday!), so I'm not worried.

Time to go feed my beasties...and the hubby, too.  I think I may have promised him burritos in an effort to get to my sewing room faster this morning after running errands...

I think we all have quilts we've made that we ended up not liking but that other people do. I'm glad you found a good use for this one. I do think it's pretty, but I can see it isn't your usual!) The blues you managed to find worked really well in your heart block. I'm sure it and any others your guild donate will be much appreciated.

I fully understand not always liking a quilt one makes. It's good you were willing to donate it for what should turn out to be a good cause. As for your mojo, seems like to me you've been going full speed ahead! I need to take a lesson from you! ---"Love

Love your blue "heart" block and your donation quilt - but the "dolly quilts" are just too cute!! How big do you make them? - ;))

I really like the Floral Breeze quilt. It has a prettiness, without being too cutesy. The doll quilts are all very cute, and will surely make some little ones very happy. The blue heart block is lovely.

I often think that quilts, no matter how long they take to finish, end up where Destiny intended them to be. Such a lovely quilt and I'm sure it will be treasured by its new owner. Your dolly quilts are adorable! Quilts for the families who have lost a loved one - especially a police officer. They have such a difficult and mostly thankless job these days. Nice work KatieMay.

Your quilt is so pretty and I'm sure it will make someone very happy. You did such a nice job on it. All of the dolly quilts are so cute, too. You have been busy!