happy easter! (and a quilty update)

Where does all my time go?  (No, wait, I know...that stupid smart phone and it's addictive games...)

Last weekend, my quilt guild had a small show - Saturday and Sunday.  It's our weekend sewing "day" at the library, but because Saturday was National Quilting Day, we turn the March "day" into a free quilt show.  This year we had something like 60 quilts on display.  Fewer than last year, but still a good showing.  I took a few overall photos... 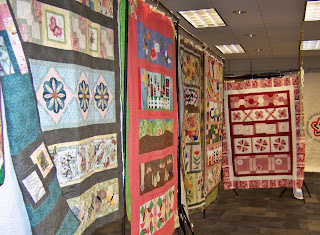 These are the row-by-row quilts from the other group.  I keep forgetting to show the rows I made, but my quilt and one other were the only two from my group of five.  Two of these were just the tops, but that counts enough to show them! 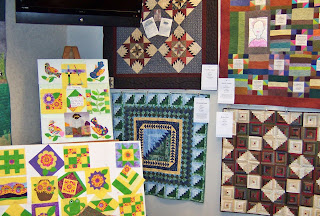 The bright blocks on the left were a challenge.  You got a little bag of the yellow, green and floral print fabrics and were to make a block.  These hung in the library (we meet in a community room at the library) to help advertise our quilt show.  Lots of creativity and fun here! Yep, William Morris.  This lady is incredible!  She's now working on the Dutch Treat quilt.  Loads of reverse applique on tiny blocks.  She has the patience of a saint to do this! 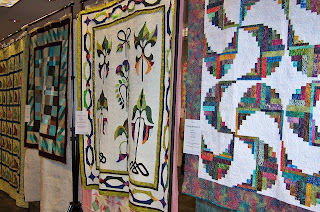 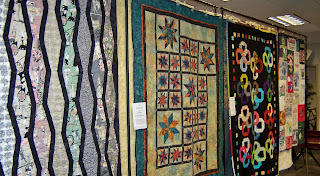 The second quilt from the left here was a guild block-of-the-month in 2015.  This is the only one I'm aware of being finished.  I didn't do it - I decided I had too many other irons in the fire.

And I like the one next to it with the rings.  The grandson of the gal who made this chatted with me a minute or two and then came back SO excited to tell me his grandma had a quilt hanging!  (She actually had two.)  He was about 10 and his excitement made all the work we put into the show worth it.  I asked if he quilted and he said he wanted to learn - I told him his grandma would probably teach him and I hope she does!

In all, it was a lot of fun.  We set up a few tables around the room and worked on projects.  I worked on my elephants - first finishing hand-sewing the pom-pom trim, then putting part of the blocks together... 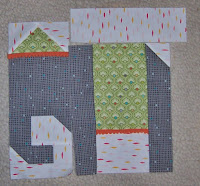 ...until I had no iron to press the legs and forgot I had to paper-piece tails!  But progress is progress.

I also worked on putting Michael's graduation quilt together... 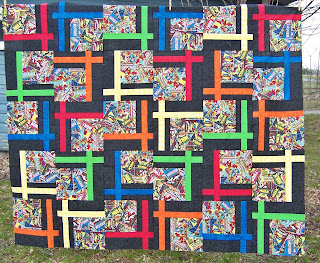 ...it's a top!  I think it needs at least a smallish black border to frame things, but again, no iron, no cutting mats, etc., so it's waiting.  I did buy more of the black fabric for the back.  And batting.  So progress again.  (But as I type this, I wonder if I should get black batting...and noticing the yellow washed out and the orange really sticks out - it's not that bad in real life!)

Micheal celebrated a birthday a week or so ago and his mom shared a slide show of photos on Facebook.  The one and only shot of him with a gift was him holding an older Spider-man comic with a HUGE grin on his face.  Guess who is in the quilt?  Yep!  I was going off my niece's huge YES to the fabric, trusting he'd like this, but now I'm more confident.

A few days before the quilt show, the hubby and I were shopping for a birthday gift for our nephew.  While we were out, I adopted Kevin. 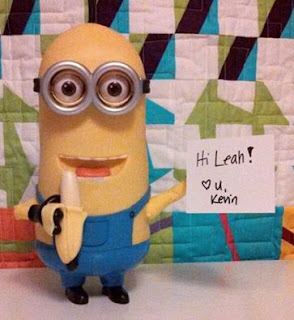 He went to my guild meeting on Thursday night.  He says silly things and sometimes inappropriate things.  But anyone who knows anything about Minions knows this is normal.  He makes me giggle.  He went to the quilt show with me because why not?  (Kids coming through had fun playing with him, too.)  My friend's daughter, Leah, told me I had to put his photo on Facebook.  So I did.  And now it's here, too.  Because who doesn't love a Minion?  (Yes, I know you're out there...go rain on someone else's parade...)

(And he's standing in front of my row-by-row quilt, but I promise I'm going to try to share more finishes and such so you can see all of it.  The hubby is starting a new shift tomorrow that will have him in bed early every night.  This means I can't sew (not that I've been doing much of that anyways), but maybe I'll be more inspired to blog after he goes to bed?  Maybe...)

I hope you're all having a nice Easter.  It's super warm here (nearly 70) and I've killed about 10 mosquitoes in my house tonight.  (Leaving the window open for the cats to play in their outside area for a few hours may not have been the best decision in mosquito prevention...)  I think there's rain headed our way, but I'll take that over snow any day!

So many pretty quilts! I love the blue/green one in the second picture, and of course, the twisty log cabin. Michael's quilt is really looking great; I know he will love it! Your elephant is cute too. I'm pretty sure hubby's schedule won't cut into your quilting time too much. Have fun with it. ---"Love"

There are some beautiful quilts in the show, so many different styles!
Your little elephants are adorable, can't wait to see the quilt come together. The graduation quilt top is wonderful, so colorful and Michael will love it!I love the bright colors with the black. Your Minion is adorable! My grandson loves his Minions (I really think it is my step daughter who is the biggest Minion fan!) It was warmer where you are than it was in NM today. Come on Spring! ! !

While quilt shows are a lot of effort for those involved they really are a delight. I so enjoy seeing others work.